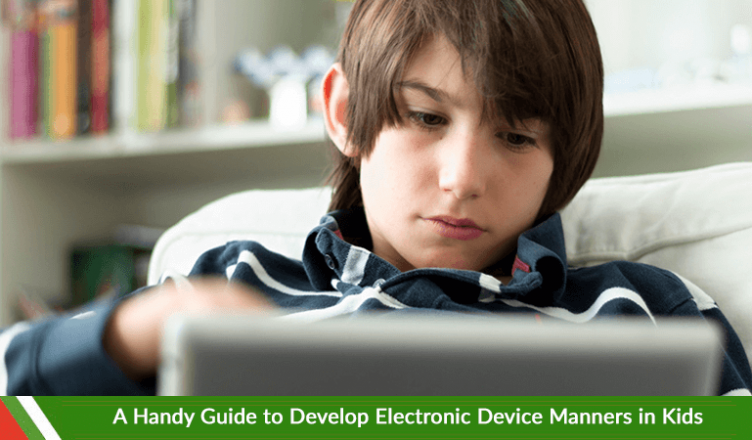 We teach our kids the etiquette rules of eating, sitting, and talking to each other. But it looks like we are lacking in teaching them the manners of using their personal digital devices. The constant use of cell phones or iPads in households, both by adults and children, have reached to such an extent that it calls for an emergency intervention and screen-time control.

Many health issues have increased in children because of the increasing and rather constant use of technology. There are manners for using smart devices that every parent and child should know and follow. Everyone is familiar with the disruptive temper tantrums these kids throw when you take their devices from them. If these are not timely controlled, it can be really problematic both for you and other people.

Here is a handy guide for you, so that you can develop valuable electronic device usage manners in your children.

Read on below how to do that:

1. Learn to put the device away without throwing a temper tantrum

Yes, parents are guilty of distracting their children or keeping them occupied with the help of screens. But there has to be a balance. Children should not throw tantrums whenever they have to spend some time away from their screens. Teach your kids that there are many other things they can do and enjoy. Practice some no-tech time at home and get involved your children in doing other activities, like sports or an arts and crafts activity.

2. Teach them to use their devices with no volume or with earphones

Older kids such as teens or tweens are in practice of using headphones. Children on the other hand, not so much. They are in the habit of playing games with high volume. It is both loud and annoying when you are in a public space. The cacophony multiplies further when each of the siblings has their own device. Not to mention the competition of who is the loudest.

Teach children that they are to use their devices with a low volume. Do not encourage the use of kiddie headphones all the time either or using headphones on high volume for long can pose damage to their hearing.

3. Every wall outlet is not for them to use

This is more about acceptable behavior in public. Children should learn that they cannot use every wall outlet. They should always remember their basic manners and ask for permission. It is understandable that the batteries run out and devices need charging. But going back to tip #01, they should learn to survive without having to use a device for short periods of time. Parents, this is not a life-saving situation. It does not need your immediate attention only because your child is having a meltdown. Teach them patience and tell them they can spend some time without a device.

Time also evolves what’s called the acceptable form of manners. Looks like in coming years, ignoring a text is going to be as rude as ignoring someone on their face. Phone use has greatly reduced real-life interactions. Be it family dinners or even friends going out everyone is more interested in using their phones rather than talk to the people sitting with them.

Talk to your kids. Teach them to make conversation and how they can talk to others. Tell them the importance of eye contact. If they absolutely have to check their phone, teach them to ask the other person to excuse them for a while.

A large number of restaurants and other businesses offer free Wi-Fi to their customers. It is alright if your child asks for the Wi-Fi password. Once. If your children cannot use the free Wi-Fi or do not get the password, then they should be alright with that. Remind them that everyone does not allow access to their Wi-Fi network to everyone.

Everyone is deep into communication nowadays and there are so many means to do so. There is instant messaging, online texting, and of course, text messages. Tweens and teens use it to stay in touch with their friends all the time. Teach your child to exit a conversation when it is getting rude, mean or harassing.

Teach them that no good comes out of arguing on the internet. Kids will have to sign out of the apps to avoid responding to a rude or bullying text. Teach them that every action does not need a reaction. Making a negative or nasty comment will only accelerate the issue. It is wise to exit the conversation.

7. Their siblings can use their devices if they themselves can’t

Looks petty. But it is not. Kids should learn that sometimes when they cannot use their devices that doesn’t mean that their siblings can’t either. It is one thing to teach your children to limit their screen time and put away their device, but it is a whole new problem for them to watch their brother or sister continue to play.

Parents should establish rules regarding device use. It is not necessary that all children must use their devices at the same time. They can take turns. Or they all use and put away their devices at the same time so there are no arguments and whining. There are a time and a place for everything and it is the parent’s job to decide when that is going to be. Not your child.

8. Teach them to put their phones away:

We use our smartphones everywhere, but that doesn’t mean that we should. Teach your children the basic manners of using phones. They should know that they cannot make or take calls in movie theatres, libraries, class, and in places of worship. Any place that requires people to maintain silence, is a place where people should not be taking calls or using a cell phone with the ringer on.

Start with your home. Parents should also establish a “no-phone policy” on the dining table. Teach children to have their phone on vibration and if they absolutely have to take the call, excuse themselves.

Another important thing that parents must teach their children while using devices and social media is – to slow down. Teach them to take a pause and think about what they post, comment, and text. They should know that there is no way to take back your words if they hit the send button. Sometimes, deleting what you wrote doesn’t help either if someone takes a screenshot of what you wrote. Ask them to always double check whatever they post.

We are living in digital times where there are texts, photos, and videos which can be posted, copied, downloaded, forwarded and even altered in a matter of minutes. Always encourage yours to respect others’ privacy and learn the difference between humor and humiliation.

Teach your kids to always put themselves in others’ shoes. Before posting anything about your friends online, always ask yourself if it’s not something that would be embarrassing for them. Ask yourself if your post won’t be breaching their privacy. If the answer is yes, it is better to keep the information to yourself. Always ask before posting a picture of anyone.