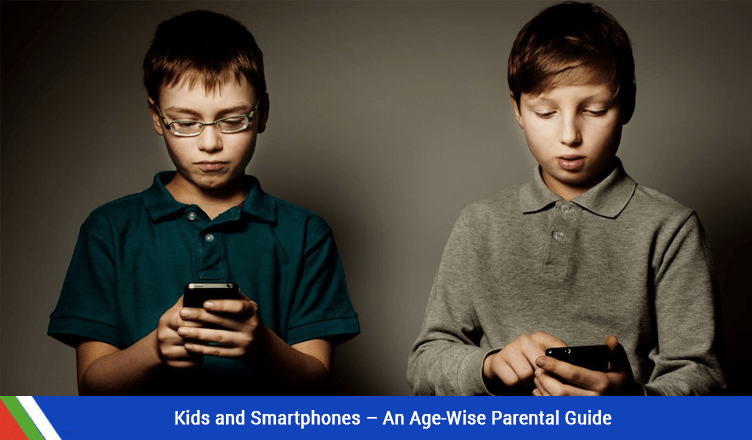 Many of the parents go through the tiring process of deciding when they should get their kids a cell phone. When is the right age? Parents need to hold off getting smart devices for their kids because the social media apps which are all the rage nowadays, are quite addictive. So much so that your child who enjoyed playing out in the yard earlier, would rather stay indoors and play games on his smartphone hours on end.

According to a parenting expert Judy Arnall, author of Parenting with Patience,an average kid gets his first smartphone at 10 years of age. But their exposure to screens begins even way before that. If you go out and visit parks and eating places, you would see toddlers using their smartphones with complete concentration. You will also witness preschoolers immersed in the videos playing on their iPad screens tapping and swiping with their tiny fingers.

It is essential that parents think twice before handing over smartphones to their children because screen usage happens to have some repercussions of its own.

Here is an age-wise guide for parents according to the experts:

The children experts are rather clear about this age group. They shouldn’t be using any mobile devices or smartphones. According to the Canadian Pediatric Society, the screen time should be less than an hour a day for young children between the ages of two to five years old. There is no concept of screen time for children less than two years old.

On the other hand, the American Academy of Pediatrics urges parents to establish consistent limits on the media consumption of children aged six and older. Michael Cheng, a child and family psychiatrist at the Ottawa Children Hospital, Eastern Ontario reports that using smartphones from a young age has adverse effects on children’s brains which are still in their developing stage.

According to Cheng, mobile devices make the brain wired and crave dopamine, the “feel-good” chemical our brain releases. The constant usage of screens leads to overstimulation of dopamine as well as adrenaline making them addictive. The technology is not all bad, but its use is certainly worrisome and a reason for growing concern. It disconnects them from basic needs such as food, physical activity, fresh air, and physical activity.

The brain loses its ability to work for dopamine when the children get into screen addiction from an early age. Also, social skills are incredibly important. Children need to interact with other people and talk to them. They need to develop the skill of reading facial expressions and develop empathy from an early age and know why the other child is sad or happy.

Arnall urges never to leave kids using YouTube unsupervised. You never know what children might access without your knowledge.  Do not use mobile devices as baby sitters.

MediaSmarts compiled a report which revealed that 24% of children in grade four own mobile phones. Some of them are as young as eight years old. Cheng has the same advice for the children of this age group – no phones. But, if some parents wish to stay in touch with their children when they are away from home, it is better to make use of an old-school flip phone without internet success.

Did you know that the big names of the tech industry were also wary of allowing their children smartphones or smart devices? Steve Jobs, the late Apple co-founder, did not allow his children to use iPad and had limits regarding technology use around the house. Former CEO of Microsoft, Bill Gates didn’t let his kid have their own phones until they turned 14 years old.

The reason for that is children, at this age, are not truly aware of the consequences and the permanence of sharing things online. Also, it is not until 13 years of age a child begins to develop the skills of critical thinking skills. Then, there is cyberbullying, Arnall points out. Having to deal with such things is not appropriate for their age not to mention mentally and emotionally exhausting. Out of the fourth-graders with their own smartphones, about 1/5th use social media such as Snapchat and Facebook even though the policies clearly require the users to be at least 13 years of age.

CPS instructs children from 5 to 11 years of age shouldn’t use screens for more than two hours a day.

Parents should place strict limits on phone usage of this age group. And it would be even better if they have their own phones, but cannot access the internet. 10-12 years is still a vulnerable age. Excess screen time gives rise to unhealthy screen habits and even bring behavioral changes in a person.

Cheng reports that people have disturbed sleeping patterns, have eating disorders and consume more junk food due to screen addiction. Young kids get aggressive because of playing video games. Kids become so addicted to online games or playing on their phones that they spend the entire day glued to their screens from the moment they get back from school till they get back to bed. They want to spend time alone, don’t have any social life. Playing all day, having no physical activity and consumption of food makes them overweight.

Screens impact a child’s mental health as well. Most people don’t really bother about it, but social media depression exists. Excessive usage of smartphones and social media networks lead to emotional damage. Kids become overly reliant on others and peer validation at this age. They take the idea of “getting accepted” too far.

Cheng says that when we don’t allow 12-year-olds to drive cars, the main reason being cars are dangerous, why let a 12-year-old have a cellphone that can potentially damage a child’s physical and mental health too. Majority of the kids nowadays get their first smartphones at 10 years of age. The girls belonging to this age group are particularly vulnerable according to this study. The more time children spend on social media the chances of behavioral and emotional issues in teenage increase.

Experts recommend installing parental controls and apps on children’s smartphones. Also, parents should avoid using the phone as a measure to impose discipline around the household. Children who fear the confiscation of their phone or any other punishment, are less likely to have an honest conversation with their parents and open up to them about their problems or any other issue they might be having in their real or digital lives. Parents could come up with a written contract before getting their children smartphones which clearly outlines the rules and expectations of healthy and safe smartphone usage.

The last age group that we have is teenagers. Cheng suggests that a child should be at least 16 years old to get his first smartphone. The reason is the increasing depression rate in teenagers because of technology addiction. They suffer from anxiety, self-harming, and suicidal thoughts. The statistics are alarming. There is a clear connection between the increased use of mobile devices and a spike in mental health issues. More people are seeking mental health services at hospitals. Cheng reports a 50% increase in the mental health crisis in the past two years and a 146% increase in mental health admission from emergency visits in the past five years.

Taking these statistics into account, parents need to adopt a more active approach to make sure that their children are responsible users of the internet and smartphones in general. There is a number of things you could do to help your child engage with you or the real world apart from sitting behind a screen. Make your weekends screen-free. This could help both parents and children to take some time off from technology and indulge in their hobbies or any other activity that does not involve screens or technology. You know what is best for your child and you ought to do it. Do not let other parents win you over and what do they allow their children.

It is quite likely for teenagers to suffer from physical and mental health issues due to the overuse of social media networks and technology. Although most of the social media apps recommend that a child aged 13 is ready to use a smartphone but, at the same time, parents need to take their child’s maturity level into consideration as well.

Apart from the link between inactive habits and increased screen time, parents might want to pay attention to some other aspects too such as the impact of screens of visual ability. A survey of 200 American children between the ages of 10 and 17 revealed that 80% of them experienced itchy, tired or burning eyes after using phones. This is also called a digital eye strain.  Teenagers should have no more than two hours of recreational screen time a day and should definitely take a break after 30 or 60 minutes.

Also, parents have to be watchful. Teenagers don’t have it easy either as they have to deal with a lot of physical and psychological changes. Parents shouldn’t only try to manage their teen’s phone usage but also look out for any indication of cyberbullying or harassment. It is unfortunate that the bullying from the school halls and schoolyard has made its way to children’s emails and social media accounts.  Social media is stressful. And kids need parents’ guidance and assistance to deal with it.

Teenagers should use social networks to connect with their real-life friends. Social media could help them in strengthening the bond with those friends. Social media is not a safe place to meet new people as it can lead to delusions of having friends. They could be anyone. Stalkers, groomers, sexual predators, pedophiles or anyone else seeking to get hold of your personal information.

Here are some quick and easy tips for parents regarding smartphones: