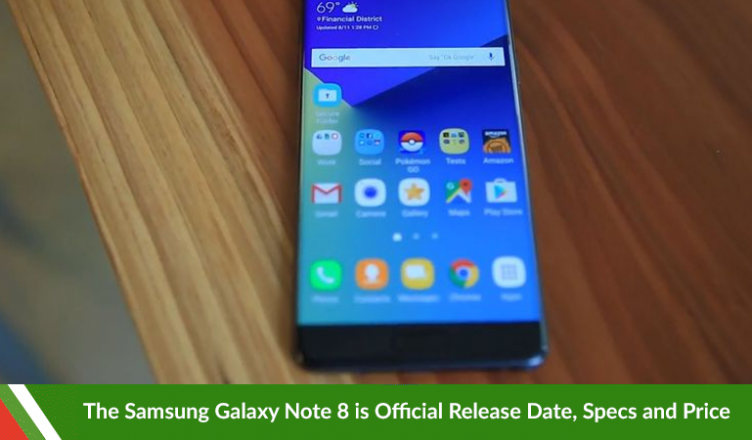 Samsung are all ready and geared up to the max to bring to the world their all new flagship phone the Galaxy Note 8. The company had a rough go at it with the previous version of this series- the galaxy Note 7 when the phones literally started to explode in people’s hands. This was due to a faulty battery that over-heated and as a result engulfed itself in flames and then exploded. One such battery failure in the Galaxy Note 7 caused a man’s jeep to be set on fire.

Samsung has since changed its battery manufacturers and sought to seek one that will at least not have their flagship smartphones blowing up. It is a shame that the Galaxy Note 7 will be remembered for as it is because it had a tight set of specifications under its belt to make one of-if not the best phone of its time. Samsung also suffered heavy financial losses and lost a lot of its credibility in the technology and phone world. But they have since made amends and are looking to make a furious comeback with the all new installment – Galaxy Note 8 set to be revealed to the world in full on Wednesday 23rd of August.

Samsung has to make full amends and get everything right this time around to completely win back fans and put a rest to all the criticism they received over the Galaxy Note 7. And it looks like they are on the right track with this launch.

Samsung is known for its flashy and entertaining phone releases. It usually has groups of dancers performing at their events and a few other exciting events preceding the actual reveal of the phone. But this time we can expect Samsung to get down to brass tacks almost right away. They can’t dilly dally with their world reveal of the Galaxy Note 8 since they lost so much credibility with the Note 7. It just might come off as disrespectful if they put on a dance and show and ignore the trouble caused by the previous installment.

While Samsung has calmed its recent presentations and shows down a notch (probably because of the Galaxy Note 7 debacle) they will have to make this one even more so. This presentation is a very important turning point in the future of Samsung’s future. If they get everything right, people might forget about the Galaxy Note 7’s disaster and completely embrace the new Galaxy Note 8.

News on specifications for the Galaxy Note 8 have been very sparse but we have received a number of details that are very interesting and make the Note 8 turn out to be one of the best phones we have ever heard of. All of these are still just an amalgamation of every leak and rumor up until now. We will only find out the true specifications with the world reveal.

We are looking at a mammoth 6.4 inch 4K full high definition display. The iconic Samsung Stylus returns, heavily improved. Samsung has done away with the home button and have went for an almost bezel-less display. Leaks have also shown that the fingerprint scanner will be put on the back like the Galaxy S8. Samsung has opted for two back cameras. The two cameras will help with better depth perception in pictures and make for an overall better and brighter photo result. There is going to be an exclusive button for Bixby- the new Samsung helper.

According to certain rumors, Samsung will now have one of if not the safest batteries in the phone industry. Hard to believe but that is what they stated during the Galaxy S8 event. According to Samsung they have an 8 point check for their batteries.

Samsung might offer a peace treaty of sorts to the fans they’ve disappointed and even lost during the fiasco that was the Galaxy Note 7 explosions. This ‘peace-treaty’ might come in the form of discounted price, a free accessory or even an extended warranty. Rumors are pointing to an extended warranty life but those are just speculations. Whatever Samsung offers, it will help put a rest to the memory of the failed Galaxy Note 7.

Samsung just might use this opportunity to breathe new life into their new voice assistant Bixby. Following an unconvincing launch for the voice assistant Samsung are sure to use this launch to their advantage. After all the Galaxy Note 8 has an entire button dedicated to the voice assistant. Bixby’s first impressions were mixed. For three months after the launch of the Galaxy S8 and S8+ users had a button on their phone that did not do anything. It took Samsung three months to completely roll out the full features of their new voice assistant. That coupled with the not so stellar performance and Samsung blocking users from changing the function of the Bixby button- it made for a very unfortunate start. But Samsung has been given another chance to prove Bixby’s merit and they will take the full advantage of the Galaxy Note 8 launch to promote it.

Will XNSPY work with Galaxy Note 8?

XNSPY will be compatible with the Galaxy Note 8. Users need not worry, and can continue to use XNSPY on their new Galaxy note 8s.