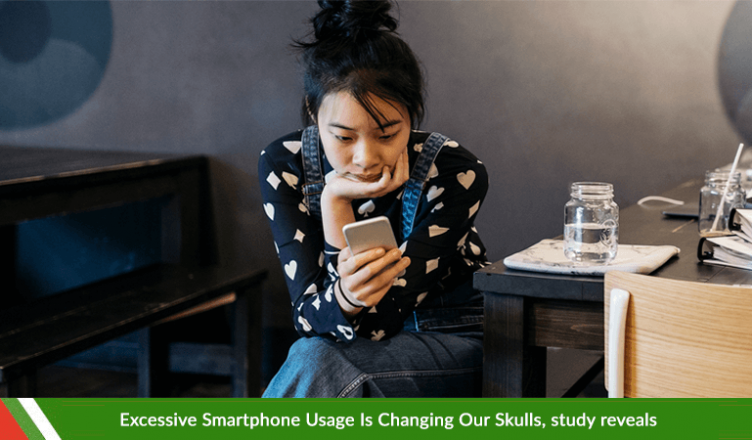 The hours we regularly spend scrolling through our news feed seems to be altering our skull. Sounds bizarre, right? But that’s the truth! A new study has revealed that due to excessive usage of handheld devices, humans are developing a bony spike just above their necks.

The bony skull bump is called “external occipital protuberance.” And it is sometimes so large that you could feel it if you press your fingers on the base of your skull. The two Australian researchers who made this strange discovery found out that around 50% of the hundreds of X-rays of people, between 18 and 30 years of age, showed bone growths. These findings warn people about the impact of poor posture in younger people due to the extended phone use.

Dr. David Shahar, along with his Associate Professor Mark Sayers at the University of the Sunshine Coast, found out that 41% of the X-rayed people had developed bony lumps which ranged from 10 to 30 millimeters. The human head is heavy and weighs about 4.5 kilograms. When you tilt it forward to look at your tablet or smartphone, it strains the neck. As a result, people get a crick which we call the “text neck.”

The pressure on the juncture where the neck muscles are attached to the skull increases due to text neck. Thus, the body responds by forming a new bone which leads to the spiky bump at the base of the neck. The spike helps in distributing the weight of your head over a larger area.

Now, these little horn-like structures are usually common in elderly people who now have a hunched-over posture because of the long-term posture issues along with high-stress loads on their bones. But, these growths have led to serious concerns about how excessive smartphone use is changing human anatomy.

Shahar reported to BBC while speaking about text neck that our necks have to work to keep our heads in place as we look down at our phones and tablets. Remaining in this position for a longer period of time and prolonging the strain, leads the body to build a new bone as to increase the surface area for holding up the head weight. The heavy load on the muscle attachment is because of the weight of the head remaining forward for extended hours. When the head tilts forward, the head’s weight is transferred from the bones of the spine to the muscles at the back of your head and neck.

The Journal of Anatomy published a study in 2016, which included radiographs of 218 young patients. Dr. Shahar and his colleague went through the findings to determine how many of them had such kind of spikes. The regular spikes measured about 0.2 inches (5 millimeters) and the enlarged spikes measured 0.4 inches (10 mm).

41% of the group had enlarged spikes and 10% of them particularly had a large spike that measured 0.7 inches (20 mm). Also, the doctors were able to find that the enlarged spikes were more common in males than females. A man had the largest spike amongst all and it stuck out at 1.4 inches (35.7 mm).

A study of 1200 individuals between the ages of 18 to 86 revealed that such spikes were more common in younger people as they spend a lot more time on their smartphones and tablets. 33% of the group had enlarged spikes, and the participants who were between ages 18 to 30 were more likely to have these spikes rather than the older generations.

According to previous studies, this is a bizarre but new occurrence which we haven’t seen in young adults to this extent back in the 90s. The findings of the study have clearly ruled out the fact that it takes years to form, and only the aging people experience these bone spurs. Also, bone spurs are supposed to be short, but the researchers found them longer in length. This means that the impact of poor posture is clear in youngsters due to their excessive use of screens and gadgets nowadays.

Further information found via this study

The study also sheds light on the fact that such cases of enthesophytes poking out of the skull are quite rare. A 2012 study looked at 40 skulls and found just one which measured 9mm, but that was before the proliferation of smartphones.

The presence of such bone spikes suggests that the musculoskeletal degenerative processes could start silently from an early age, says Dr. Shahar. These findings are quite shocking because usually, bone spurs take years to form and are highly likely to be found in the elderly population.

He also said that it is important to stress on the fact that in most of the cases, bone spikes measured only a few millimeters and even then, we came across projections ranging from 10 to 30 millimeters in the young population that was part of the study.

Numerous other studies have suggested that smartphone usage is linked with bad posture. Common Sense Media created a poll about mobile devices use which shows that teens are addicted to their phones. And Flurry Mobile’s data revealed that an average consumer in the United States spends five hours on their smartphones. Dr. Shahar and Dr. Sayers anticipate that the findings of their research would play a substantial role in assisting parents in disciplining their children. The bump is not the main problem the researchers say. But it is the sign of a sustained poor posture that could be corrected. The duo plans to study this phenomenon in depth. Both doctors are now examining the phenomenon and hope to develop and come up with the resources so that these growths can be stopped especially in school-going children who are equally addicted to their tablets and smartphones.