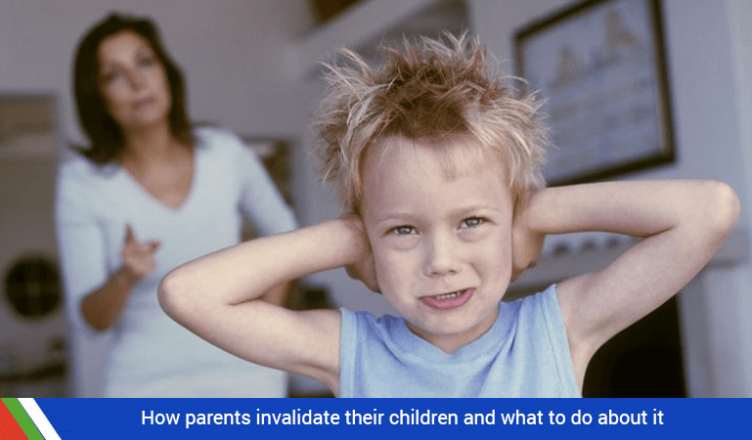 A 2018 study revealed that mental health problems are projected to cost around $16 trillion to the world economy by 2030 due to a cumulative loss of 2 billion working days each year.

Invalidation refers to a set of behaviors displayed by parents or other adults in a child’s life that include invalidating the child’s inner experience that minimizes or rejects the child’s emotional experience. Emotional invalidation is difficult to distinguish because it occurs with distressing frequency, and is even normalized in most societies. Such behavior can also be conscious or unconscious.

So what does emotional invalidation look like in practice?

Four-year-old Kevin regularly complains to his parents that he feels scared of ghosts when he tries to sleep. His parents keep telling him that there is nothing to be scared about and ask him to go to sleep.

Hannah, an 11-year-old girl, comes home crying one day and tells her father that she lost her stationery items at school. The father, who is watching television, tells her it’s nothing to worry about and that she is overreacting.

10-year-old Jason suffers a minor injury while playing in the park. He begins to cry as he walks over to his parents, who tell him to stop crying because “he is not a little boy anymore.”

Which of the above situations do you think shows parent(s) invalidating their child’s emotions?

While the above situations may not seem too serious, regularly experiencing invalidation can lead children to believe that their feelings don’t matter at all. This can lead them to feel rejected and unwanted, even into adulthood. Such a feeling is distressing and can impact healthy psychological development. This is why chronically invalidating behavior is a form of emotional abuse.

Children who grow up in emotionally abusive conditions are more likely to develop depression, anxiety, personality disorders, and other mental health problems as adults. In adulthood, they suffer from poor self-esteem and have problems with interpersonal boundaries. They find it difficult to feel emotionally safe and experience difficulty in managing stress. It is also very common for children to begin invalidating their own feelings once they reach adulthood.

Think about it: invalidating someone’s experience is so commonly practiced in our everyday lives that little attention is paid when it is done to children.

Consider how commonly the following phrases are used during interactions with our family, friends or other loved ones.

“Stop being so dramatic.”

“Stop blowing things out of proportion.”

“Forget about it and focus on the positive side.”

“I also experienced pretty bad things, don’t worry about it.”

“This is how things happen, you need to get used to it.”

“I don’t understand why you feel this way; you are very lucky to have XYZ.”

“Stop the anger/crying/panic and calm down!”

These invalidating statements are frequently used but they minimize or reject the emotional distress felt by the other person and are quite hurtful. Invalidation can also take the form of non-verbal expression such as eye-rolling, waving away the distressed person, or even outright ignoring them.

Now that it is clear how chronic invalidation can cause long-term damage to psychological well-being, here are some tips to create an emotionally healthy and validating environment:

What does this look like in practice? Let’s go back to the three scenarios we previously discussed.

Kevin’s parents minimized the fear he was experiencing by focusing on the cause that, in their view, was irrelevant. To validate his emotion, they could have identified that he was scared (regardless of the cause) and express an understanding of his fears.

Hannah’s father minimized and rejected her feelings by telling her that she was overreacting. Instead, he could have turned off the television and listened to her patiently. By doing so, he would have recognized that Hannah was feeling sad because she experienced a sense of loss. He could have explored further by asking her clarifying questions, such as inquiring about why she felt attached to her stationary. By doing so, he would have communicated a recognition of the emotions Hannah was experiencing.

Jason’s parents may have felt that the minor injury was nothing to worry about, but they ignored and rejected how Jason was feeling about it. They could have tried to understand and acknowledge that he was in distress. Instead, they chose to hurtfully tell him that his emotions, his internal reality, was incorrect, thereby denying his very subjective experience.

Here are a few examples of how one may validate someone’s feelings:

Of course, there are many other ways to validate or invalidate, but they are beyond the scope of this post. Please bear in mind, validation lies at the heart of any relationship. Children, who are especially vulnerable to invalidation, suffer the most from it.

Providing an accepting and loving environment for children is critical to their psychological well-being. Remember that invalidation can cause serious and long term damage. Recognize that when children are validated, they feel safe, accepted, valued, cared for, and loved.