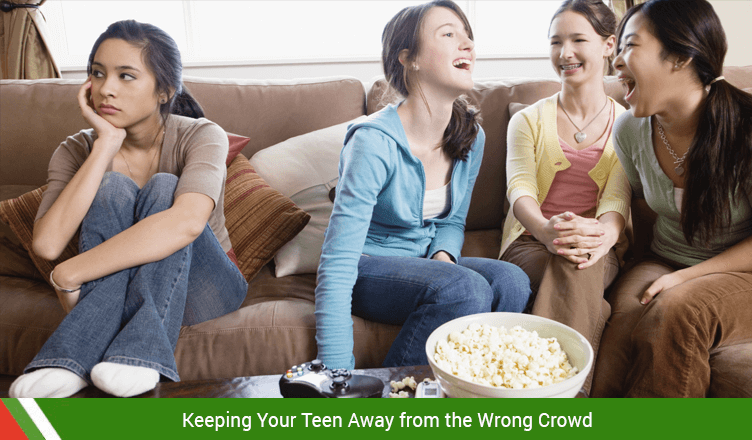 First things first. As a parent, you cannot pick your child’s friends. If you criticize their friends, get ready to get a strong reaction. The thing is, at their age, teens are developmentally bound to defend their chosen tribe. Birds of a feather flock together, and it is the truth in teenage.

Belonging and getting accepted in a group is an integral part of a teen’s development. This is the main reason teenagers get really into their looks, attire, and how they act. When they find their own clan, people they have in common with and can relate to, it is complicated for parents to break through that bond.

Why a Reckless Group of Friends?

There could be several reasons as to why a person would get attracted towards a certain group of people. If your teen has some behavior issues, you would see his group of friends having similar problems to your child’s. So, if your child is acting out, you cannot blame it entirelyon his friends. He has it in him, and that is why he chose those friends.

If you are noticing loud changes in your child since he made those friends, manage the time they hang out with them. Implement appropriate measures, and with some time and effort, you could bring a change.

At the same time, realize that as they grow up further, they would change a lot. They will find a group of peers they can identify with. All teenagers act rebellious at one point in their lives. The signs are small at first. Your child might go to school, ace his exams, and act like the good kid. But they would show that rebel side of theirs via their clothing style, hairdo, music, and maybe even a new found hobby.

It is crucial that parents understand the developmental function of rebelliousness. Adolescence is that phase of a child’s life when they are searching for their own identity away from their parents. They are becoming individuals, with their unique personality which separates them from their parents. This is often a hard thing parents have to go through. But parents should accept and manage this change.

If you attack their friends or criticize them repeatedly, you are helping them in getting closer to their peers. No matter how you feel about them, and even though you might be right, constant criticism is not going to help or bring any effect.

While you think it is your duty keeping your child safe from any kind of harm, your child’s goal is to find people who they connect with and are like him. But if you think that apart from sharing interests, your child’s friends are toxic or the reckless kind of crowd, here are some surefire ways to deal with it:

Know that when you are criticizing your kid’s friends, you are also disapproving an aspect of your child. Even if whatever you are saying is true, be prepared to face hostility and resistance. Pointing out that your child has picked up a wrong crowd as their friends repeatedly, is going to be an unsuccessful strategy.

You can’t really expect to have a civil conversation with your child when you have just said that his friends are no good. Your child is going to protect them. It is a natural urge to be there for your friends, whether they are with you or not.

Be Clear About Expected Behavior

Teenage is a tricky stage. Teenagers get all sentimental and emotional in no time. So, tread carefully. Tell your child that his friends might be good to them, but they are reckless. And if they are not careful, he is going to get into the same kind of trouble. You have to converse in such a way with your child so that they can understand your point of view clearly. Be specific in what you say.

Limits Regarding Going Out at Night

As your children hit teenage and enter high school, they automatically assume that every Friday night is a night out. Though there is nothing wrong in unwinding after a hectic school week, it is not a RIGHT. You have to establish limits and set some rules in place that in order to go out on Friday nights, they have to earn that right and act responsibly.

Tell them that you expect them to be trustworthy.  And behaving responsibly means not hanging out with kids who are into underage drinking and drugs. Your child should discuss his weekend and Friday nights plans with you first.

Treat going out as a privilege and let your child know that they have to get their plans run by you first and behave responsibly to earn it.

You should make it clear to your child that no matter what the other kids are doing or their friends are up to, drinking before age is not allowed. Drugs is off-limits.

Teenagers have to train themselves and learn critical problem-solving skills for their future adult life. Then, there is learning about the world and other social issues in general so that teenagers can keep themselves away from harm and make smarter choices. Things like alcohol and drugs hinder the possibilities of valuable learning.

If you are sure that your child’s friends are indulging in reckless behavior and things which are not according to your values, then you have to set limits on how much time your teen spends with them or whether your child should see them even. If your teen’s friends are constantly found in trouble with the law, you could clearly tell your child that you don’t want them to end up like their friends. They could get in serious trouble as well.

You are the parent and you have to establish controls. Defiance becomes a big issue in teenage, but you have to place the rules. You are going to set the standard as a parent, and if he fails to comply, he would know that there were expectations and rules in place, and he has to face the consequences now.

Parents, know that your kids are going to make mistakes. As they grow up, they would make some wrong decisions and make bad choices. The best thing you could do is to set limits and guide them in the right manner. Teach them what is wrong and what is right, and then hold them accountable for their actions.