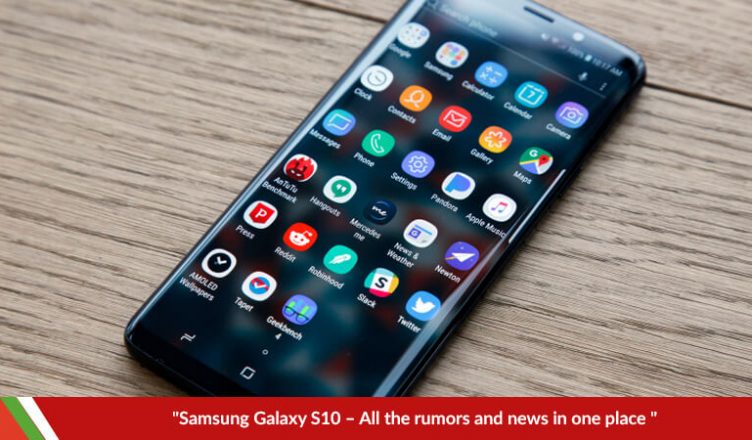 People are raving about Samsung’s upcoming Galaxy 10 and it’s partly for all the crazy rumors that are coming out every now and then.

In our today’s special blog post, I’ll be looking at all the major rumors around the Galaxy 10 and with my very own special verdict on top of that.

Not a rumor anymore; the new Galaxy S10 will come with an Infinity-O display that looks pretty much one entirely bezel-less display with two holes in it; for the cameras of course.

Even though it looked surreal when the news first came out, the launch of the Galaxy A8+, has somehow confirmed it with its Infinity-O display. There’s cut out for a single camera in the Galaxy A8+ but there could be two for the Galaxy S10 devices.

Let’s just discuss how much would that make sense.

There are many people out there who still love to own a smaller-sized device, like the Galaxy S9 or the iPhone X. But if we say that there will be a 5.8-inch model, then it either will be of a much smaller size than the S9 because of the Infinity-O or may not have the new Infinity-O display. But there’s no way that the Samsung’s flagship won’t have their best tech. I believe that that smallest screen size for the Galaxy 10 would be 6.1 inches; encapsulated with the same body aspects as those of the Galaxy S9.

Moving on to the remaining two screen sizes, I believe that it makes no sense that Samsung will have a 6.4-inch phone when they’ll have a slightly bigger screen size of 6.7 inches, unless the 6.4-inch device doesn’t have the same specs and price as the other two devices, like the iPhone XR. Moreover, having 4 different variants are just too many options for the buyer which isn’t, in fact, a good thing while selling flagship devices. This will simply hint that Samsung wasn’t sure of what would work so they sent every prototype down the assembly line.

From a manufacturer’s perspective, it’s just too many SKUs of a single phone. More SKUs would mean more unsold inventory; lower economies of scale and more cash piled up in the form of stock, which all contributes to lower profitability.

However, the three-variant strategy makes sense; now that Apple has done it and as we all know that both Apple and Samsung are very inspired by each other, so it’s no wonder if there’s a third device with fewer premium features and lower price tag. So our final guesses are that there will be a 6.7-inch phone; which could be the Galaxy S10+, a 6.1-inch Galaxy S10, and a 6.4-inch S10R version with fewer features and a smaller price tag.

The new and the upcoming Galaxy device is also expected to sport a supersonic in-screen fingerprint scanner that’s meant to be better than what we have seen on Vivo or other Chinese smartphones so far.

But how true is that there will be an in-screen fingerprint scanner on the upcoming S10? Why do I have doubts about it? See rumor #4 for that.

According to TF International Securities analyst Ming-Chi Kuo, the cheaper variant will not have the same in-screen fingerprint technology but rather a conventional fingerprint scanner placed on the power button. Kuo is also amongst those who claim that Samsung is working on three different variants of the Galaxy S10.

But wait! Do we really need both Facial recognition that’s as good as Face ID and in-screen fingerprint scanner at the same time? I am currently using a Galaxy S9 and an iPhone XS Max and I know that the Face ID is the perfect device security lock. If Samsung will have something like that in their upcoming phones, the in-screen scanner is outright useless.

Not just more RAM, but there are rumors that the future Samsung devices, that could or could not include the Galaxy 10 devices, will have faster LPDDR5 RAM and UFS 3.0 chips. According to Ice Universe, Samsung has already begun producing the chips, suggesting that the new Galaxy 10 devices will very likely have these chips.

If your top reason to choose a smartphone is its performance, then this is certainly a very big news for you guys. The UFS 3.0 chips are snappier and more efficient. The LDDR5 RAM particularly improves read and write speeds which will allow new content like recording of 8K videos and even much slower videos. The UFS 3.0 chips are more energy-efficient, work at hotter temperatures, and have the capacity to accommodate wider bandwidth.

It’s not a rumor though but well, it’s still worth a mention. The new OneUI beta is already out on limited Galaxy S9 devices and it looks pretty neat. Samsung has almost redesigned ever bit of its previous OS and I can only tell how good (or bad) it is once we have our hands on it. The new OS is meant to let users access Samsung’s ever-growing display sizes with a lot more convenience. Other changes include an even much more minimalist interface, which one YouTuber described as “boring.” However, this may not be true for someone like me who loves neat and simple mobile interfaces. There’s not much more to say here but I am glad that there’s a new software coming out.

Samsung announced in February that their new nanometer chip plant, that they invested $5.6 billion in, is developing a 7-nanometer chip which is a slightly smaller chip size and will give the company a bit more room for the design changes.

Though you guys would know this: Samsung uses both its Exynos chips and Qualcomm’s Snapdragon processors depending on the varying carrier requirements of each region. For instance, the new Exynos 9820 will be released in international variants while the Snapdragon-powered devices will be released in North America just like in the past.

However, there’s a possibility that none of these chipsets may be fast enough to beat Apple’s A12 Bionic chip according to one leaked benchmark test by Ice Universe. The benchmark tests show an XS beating an Exynos-powered Galaxy S10+ very easily.

A fourth variant could be there, too, and it will have a 5G capability built-in as identified by XDA Developers.

Samsung will surely have 5G available on its devices in 2019 as Verizon announced its first 5G phone from Samsung. AT&T also confirmed that they will offer two different handsets from Samsung, of which one will be released in the first half of 2019 and the other in the second half.

There are several reports, including a leak from SamMobile that confirms that the Galaxy S10 will have three rear cameras. The primary camera will have a 12-megapixel sensor, f/1.5-2.4 variable aperture, and a 78-degree field-of-view. The second lens will be a 16-megapixel with f/1.9 aperture and a 123-degree field-of-view. And the last one will reportedly come with a 13-megapixel sensor and f/2.4 aperture.