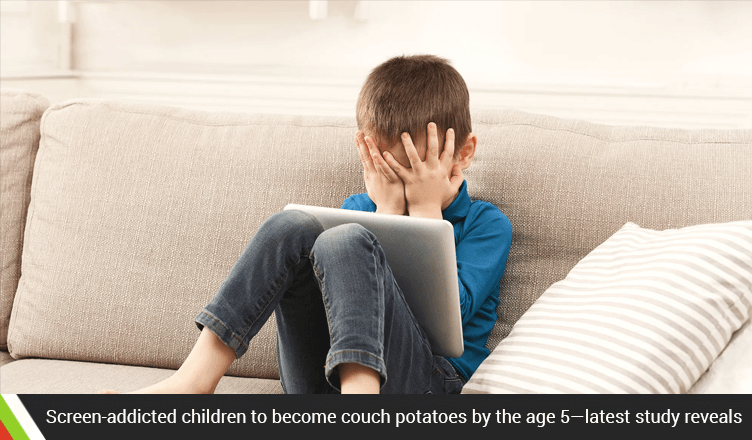 According to research, the reduced amount of physical activity could lead to poor health and obesity. Parents should follow the World Health Organization guidelines for restricting screen time of young children to an hour a day.

The study was led by Dr. Falk Muller-Riemenschneider, who said that bringing a reduction in screen time in the early years could promote healthier behaviors and the related outcomes later on in life. The research findings were acquired from the study of 552 children. The National University of Singapore did this study countrywide and then questioned the parents about how long their children aged two and three spent on tablets or smartphones.

Kids aged five were given activity trackers to wear for a week that constantly monitored the sleep, rest, and activity levels of children. Only one kid in five was able to meet the WHO guideline limit. And those children who used screens for 3 hours or more were 30 minutes less active throughout the day. These activities include walking. Also, they were 10 minutes less moderate towards activities like running. This calls for limitations on the screen time of young kids.

Congress has passed legislation amongst rising concerns regarding smartphone use for taking a closer look at the impact of excessive smartphone use. This has also led investors to urge big companies to alter their approach towards young customers.

Last year, the World Health Organization said that toddlers under a year old should not have exposure to screens, and kids between the ages of 2 and 4 should not have more than an hour of screen time daily. Tech experts from Silicon Valley also admit to keeping smart devices and software they engineer away from their kids.

But, amidst all this, some of the research questions these fears. This does not imply that the extensive use of screens is not harmful. No doubt, those children who spend too much time on their phones could greatly miss out on the number of things such as interaction with people and the outside world along with other physical activities such as walking, running, and exercise. Also, using extensive screens leads to mental health issues in children.

Researchers are challenging the common notion that screens are the main cause behind increasing anxiety, deprivation, and sleep deprivation among youngsters today. They said that in a large number, the phone just reveals the problems, a child could experience without the phone. The goal of keeping the children away from phones is making it all the more difficult to carry on productive conversations. These include discussion about how low-income people can use phones safely and benefit from it, how to make phones useful for avid users along with protecting privacy.

Andrew Przybylski the director of research at Oxford Internet Institute says, “Many of the people who are terrifying kids about screens, they have hit a vein of attention from society, and they are going to ride that. But that is super bad for society.”

Hancock’s analysis observed 226 studies on the health of phone users and says that “when you look at all these different kinds of well-being, the net effect size is essentially zero.”

The debate about screen time and mental health is nothing new. It began when the iPhone first emerged. The American Academy of Pediatrics published a paper in 2011. It warned the public about Facebook depression, a term that was something new at that time. But now most can easily relate to it in the light of tons of studies that talk about the negative impacts of social media on the mental health of the users, especially teenagers. The renowned psychologist Jean Twenge talked about the rise of depression and suicide in teens due to smartphones in her article. Tilted, “Have Smartphones Ruined a Generation?” she accredited the sudden jump in reports of anxiety, depression, and suicide from teens after 2012 to the prevalent use of smartphones and social media in teens.