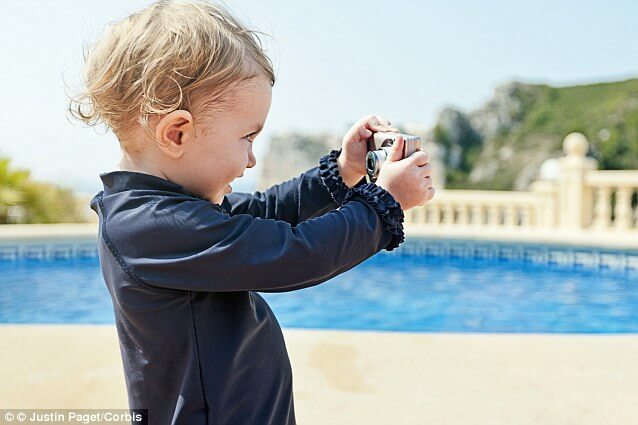 It’s nearly an impossible task to keep digital devices away from kids. As much as they love watching their favorite cartoons on YouTube, they are little more than interested in taking selfies. That’s probably because they see their parents, baby sitters and almost everyone else around taking pictures of themselves in weird poses. This is no surprise because it’s part of our culture now and we are profoundly attached to it.

There are some tiger moms and tiger dads that are concerned if letting their toddler take selfies could affect their behavior or mental health as they grow. An occasional selfie isn’t a bad thing but this practice could become a game for young children to play. If parents allow their young ones to take limitless photos of themselves, they end up planting a seed of obsessive self-regard. This could even happen if parents are taking their own selfies in front of their child.

Watch out for the message selfies portray!!

Children grow up mirroring their parents. So, if mom, dad or any other caregiver, constantly models narcissistic behavior, your child won’t be able to realize those actions aren’t healthy. There are potential harms hidden in the selfie culture that parents often overlook. We just don’t take selfies randomly, we spend time carefully selecting them and editing them to present our best self.

In fact, selfies are a form of self-admiration. Regardless of your age, they provide you constant opportunities to obsess about your looks and external presentation. You experiment with different faces and positions to achieve that perfect look. By taking selfies, you are telling your child in a subtle way that their appearance matters and you love them for how they look.

Striking poses, changing facial expressions, and tilting your head just to look good is an unhealthy practice. It is teaching your child to create an image which isn’t their true self but a something they believe the world finds attractive. This habit, in the long run, could affect how your child thinks about their self-image. As your child reaches their teenage, this habit could turn into narcissism. They would constantly think of their appearance and strive to achieve the best shot for the sake of getting their peer’s attention.

Before this innocent game of taking pictures becomes an obsession, parents need to take action. It first begins with recognizing the problem. Of course, there is no harm in taking a selfie with your child or letting them experiment with your phone. However, when it comes to media, we must set healthy boundaries.

First things first, we must be careful about the messages we are giving our children surrounding their image. We have the opportunity to shape their minds while they are young. We definitely wouldn’t want to send the message that our kids are only good and acceptable if they do this particular thing.  Such messages leave a void in the hearts of kids and they try to fill it by seeking approval from their peers. And as they reach their pre-teens and teens, a perfectly filtered selfie might just be the perfect ticket they are hoping for.

Don’t take filtered selfies in front of your child either. Avoid striking poses. In case you notice your child is taking excessive selfies, you need to take a stance. Don’t take away their tablet from them straight away. Instead, have a talk. Young ones tend to listen and they are smarter than we think they are. So open up a conversation about why your kid is taking so many pictures. Perhaps questions like “It seems like you have been taking a lot of pictures of yourself recently.” “Do you enjoy it?” If so, “What do you like about it?”

If your child is just a toddler, then make the most out of screen-time controls. Don’t leave them with their tablet for more than 2 hours in a day. Help them engage in other activities apart from playing with gadgets. Don’t forget to pause and consider how often you take selfies of yourself as well as with your kid. After all, kids learn most from watching people around them, especially their parents.