Skip to content
XNSPY Official Blog > Parental Control Apps > Technoference: What is it and what does it have to do with you or your kids’ smartphone addiction? 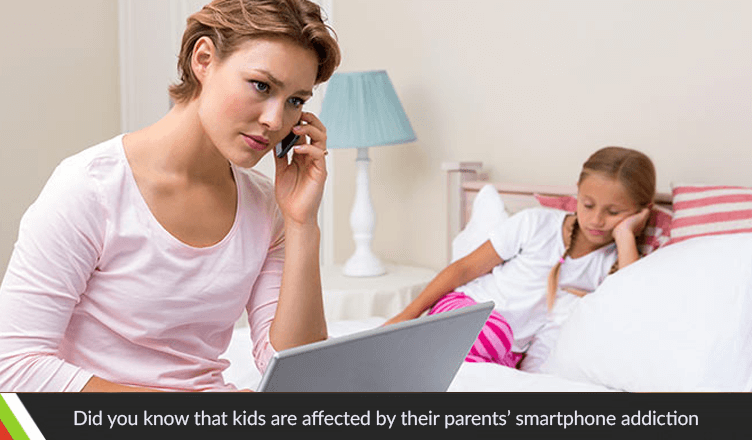 Your smartphone addiction is not just your problem; it is affecting your children as well. While you are glued to the phone, your child is fighting for your attention. This is causing detrimental effects on your child’s development—making them more irritable and frustrated.

When you don’t engage with your child and don’t fulfill their desire for love, affection, and companionship, it makes them more prone to throwing temper tantrums. The result? Parents look to the digital realm as a form of escape from their parental duties. So the cycle continues.

What’s worse is that kids notice their parents’ addiction, too! Not only this, but it makes them feel negative emotions as well.

It is understandable that parents need to use a phone to get day-to-day tasks done. But too much screen time is causing more harm than good. Parents need to realize this as soon as possible before it is too late.

The term was coined by Brandon McDaniel, an assistant professor at the Illinois State University, to specifically describe behavioral problems in children associated with parent’s lack of attention due to interruptions by their smartphones. Although the term is used to describe parent-child interactions in the digital age, it has come into use in a wider context.

With digital devices taking over our lives, 47% of parents have said that either they or a family member used their phones during dinner. Technoference is causing families to spend lesser quality time together. Interruptions kill the flow of a conversation and can lead to a person feeling unimportant. Checking your email, texting someone, going through social media is counterproductive to activities involving family gatherings.

Common Sense Media conducted a poll of 900 families with children between the ages of 2 and 17. According to the poll, 51% of parents said that using phones during dinner time made them feel disconnected from their families. Similarly, 58% of parents showed concern that digital devices were hurting conversations. More than half of the parents realize what is going on but are not aware of the consequences this it’s having on children!

Another survey conducted by the University of Michigan and Illinois State University involving 183 families. Among 40% of mothers and 32% of fathers admitted that they were addicted to their phones to some level. The study concluded that the more technoference occurs during family time, the more a child was prone to behavioral problems.

Short- and long-term effects on children

Research suggests that a child learns behavior, emotions, and language from actively engaging in activities with their parents. When parents are absorbed in their smartphones, a child has no way of learning about social interactions. As the child grows up, this may cause problems in a child’s social development. A child may find it difficult to socialize with peers and in expressing themselves.

Psychologist Catherine Steiner-Adair interviewed 1,000 children aged 4 to 18 and asked them about their feelings regarding their parent’s phone usage. The children said that they felt, “sad, mad, angry, and lonely.” This says a lot about how parent’s phone usage cause children to feel. A child who is dependent on parents, it is unnatural that they feel lonely. The reason a child would feel so is because their parents are neglecting them and not giving them the time that they need.

Research conducted by Steiner-Adair concludes that using a phone in your child’s presence can make them feel unloved and unimportant. This can greatly affect the self-esteem of a child by making them feel unwanted by their parents.

But this is not all! Lack of attention from parents, forces kids to obnoxious behavior in order to grab their parents’ attention. This involves loud, misbehaving, hyperactive, and rowdy behavior. Children don’t internalize their feelings. This is because children have yet to learn about emotions and how to deal with them. So instead of internalizing the lack of attention from their parents, many kids may seem to “act out” their feelings, which is translated to misbehavior by adults.

Instead of getting to the root cause of the problem, parents may open up their smartphones to escape temper tantrums. This exacerbates the situation and the child may go to extreme lengths in demanding attention.

A study carried out by Michigan State University and Illinois State University, involving more than 300 parents found that behavioral problems in kids were linked to interruptions created by the digital devices. However, the behavioral problems in children were affecting the relationship between a mother and a child. The same was not true for a father-child relation. This could be due to the fact that children spend most of the time with their mothers.

Research has shown that the short-term effects of a child will attempt to gain the attention of their parents by making a ruckus. However, there is very little that research says regarding the long-term effects of a parent’s phone addiction. But common sense suggests that as these attention-deprived kids grow into adults, they may not have a healthy relationship with their parents. Moreover, they may grow to dislike their parents. Not only is it unhealthy for the child, but this could lead to defining the relation a child may have in the future with their children. This spiraling effect is causing parents to think of alternatives.

What parents should do instead?

Parents may be addicted to their smartphones without even realizing it! This is why, as a parent, you need to assess your smartphone usage on a daily basis—how much time do you spend on your phones, how much time is dedicated to a certain app and so forth.

Also, ascertain if your smartphone usage is affecting your responsibilities as a parent. Are you paying less attention to your kid? Does your child nag you while you’re on the phone? Is your child becoming easily irritated day by day?

If you notice these signs, you need to put your phone aside right now! You need to follow a digital device detox regime to help you get back on your feet as a parent. Here are a few tips that you can follow to overcome your phone addiction.

The bottom line is this: Reduce the amount of time you spend on the phone, especially in the presence of your kids. To have a meaningful relationship with your kids, it is important that you give them undivided attention. This is, in fact, true for every other relationship that we form in our lives.

Your child may grow up to resent you and your parenting habits, and as a result what these habits did to them. Before they are at an age where they realize that their parents were ignorant of their needs, it is important that parents rectify their mistakes.

There is no doubt that increased usage of smartphone—whether using social media, instant messaging applications or emailing—is affecting everyone around us. It is preventing us from forming meaningful interactions. It is costing us in unprecedented ways.

Until recently, there was very little research done on how technoference is causing a negative impact on children. With current research, one thing is for sure, parents need to be actively involved in their child’s upbringing. This involves spending reducing distractions that digital device cause in daily lives.