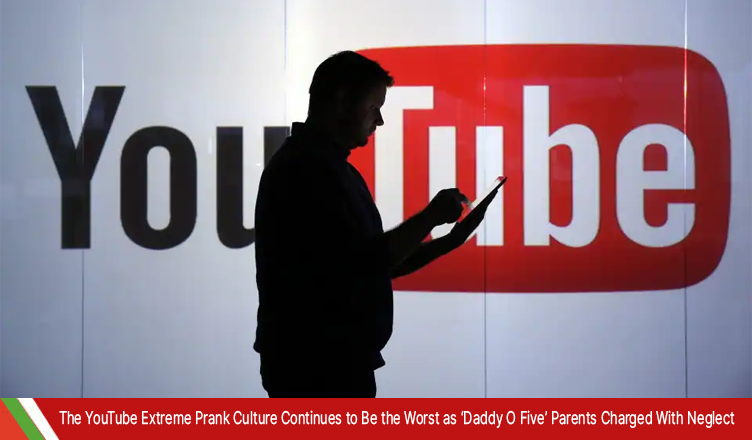 In the past few months on YouTube, the community on YouTube has been enraged by a YouTube couple who posted pranks on their channel titled “Daddy O Five”. The videos posted by this channel showed them playing ‘pranks’ on their children that viewers and critics hailed as child abuse. In the videos, the children would often be subjected to physical and mental abuse, the most common target of these pranks was the youngest child named Cody. The children would often by seen crying in distress and sometimes even bleeding from the physical abuse that they received. The videos have been taken off YouTube, but in one of them, the parents berate Cody — to the point he starts crying — while falsely accusing him of spilling ink on the carpet.

The Issue of Child Abuse Comes to Light

After other prominent YouTubers such as Phillip Defranco brought light the issue, the story caught national attention of the media and local child protective service authorities. The father and step mother of the children lost custody of two of the children, Cody and Emma, following child protective services action. All of their videos on their YouTube channel were deleted and the couple posted an apology video, saying that the videos were faked. Critics were still skeptical about these claims as they doubted the children could be such good actors, when shown crying and clearly frustrated and flustered.

“We did do pranks, but most of the time the kids knew about them and they were planned,” Mrs. Martin told the US television show, adding that some of the content was real, but some was acted.

The couple had appeared on Good Morning America on the 28th of April revealing that they were under a child abuse investigation by the police.

The couple have now been charged with two counts of neglect of a minor in Frederick County Circuit Court. The allegations are that they parents both neglected Cody and Emma Martin between November 2016 and April 2017. A plea hearing is scheduled for September 11 as lawyer Stephen Tully has confirmed. He does not provide any further details.

Under the ‘Daddy O Five’ channel, the family made over 300 videos which often included the parents berating, yelling and sometimes even hitting the children. Sometimes the older children were made to beat Cody and Emma, that is not to say that these children weren’t subjected to these ‘pranks’ themselves.

This is only the result of YouTube prank culture, where harassment and abuse of another individual becomes amusement for another. Other mainstream YouTubers who previously made these prank videos were famously caught faking the pranks. Apparently not everyone caught news of this and fans of these channels tried to replicate these dangerous and stupid pranks without ‘faking’ them. This led to channels such as Daddy O Five, who have now been charged with neglect of two of their own children.

Be responsible with what you watch and what you support, YouTube pranks can be harmless if done well, but these were obviously not.