How to Spy On WhatsApp Without Rooting?

Rooting an Android phone is equivalent to jailbreaking an iPhone. It is the process of unlocking your phone’s operating system so that you can install unapproved apps, replace the firmware, and in short customize your phone. But I guess, you probably already know that. But what you don’t know is that rooting is not a simple process and does come with its pros and cons. Under normal circumstances, there’s no need to root an Android device because the operating system itself is pretty eclectic and lets you do everything one can possibly think of. However, what Android OS doesn’t let you do is anything that could make your device vulnerable. By rooting, you are removing all those restrictions that prevent the OS from being vulnerable, allowing spyware, adware, etc. to access more than the usual.

If you are reading this right now, it’s probably because curiosity is killing you; you are dying to know what’s on their WhatsApp; who they are chatting with and whether you are being deceived or cheated on. And if you are a parent, you might be worried to know if your child is doing fine in their digital and real world.

Basically, we understand that the reason you were looking for spying on WhatsApp without root was that you either just want a simpler mobile spying solution or need something that won’t require you to get through the tiresome process of rooting.

To spy on WhatsApp without rooting; there are three different ways to go about it. You can pick the one that serves you the best.

A spyware is an application that can be downloaded on to a phone or computer to gain remote access to the files stored on that device or computer. This is probably the most convenient method to spy on someone’s WhatsApp without having to go through the long rooting process. However, there are two downsides to using a spyware.

First is that you’ll always need access to the device whose WhatsApp you want to spy on and that is because you need to install the spyware manually. There’s no way you can get the spyware downloaded to a phone remotely.

The other one is that while you might not need to root a phone to install the spyware, you might need rooting particularly for spying on WhatsApp. This goes for literally every spy app out there with a slight exception for the one discussed below.

If you want to spy on the WhatsApp of an Android phone, chances are you will have to root it. Pretty much all monitoring apps support WhatsApp spying on rooted Android devices. When you use XNSPY, rooting is still a prerequisite for spying on WhatsApp but you can still view WhatsApp photos and even most of the chats without rooting your Android device.

Xnspy recently introduced a new feature called “Keystrokes” which can help you get enough WhatsApp details to spy on someone.

With rooting, Xnspy allows you to spy on the WhatsApp chats, view their time and date stamps, photos and call logs. So it’s a pretty straightforward route for someone who has no issue rooting an Android device. But if you don’t want to go down that road, there’s still a lot to gain.

How Spy on WhatsApp without rooting with Xnspy?

Spying on WhatsApp without rooting with Xnspy allows you to spy on the WhatsApp photos only. Plus, with the new Keystrokes feature, you could get almost all of the sent texts, plus most of the received WhatsApp messages.

To do that, you must first subscribe to Xnspy and download it on the target phone. That’s the only time you will need access to the target device. Wait for 24 to 48 hours for the app to transfer data from the monitored phone to your Xnspy web account.

To Spy on WhatsApp Photos:

Follow the steps below to start spying on WhatsApp photos without rooting: 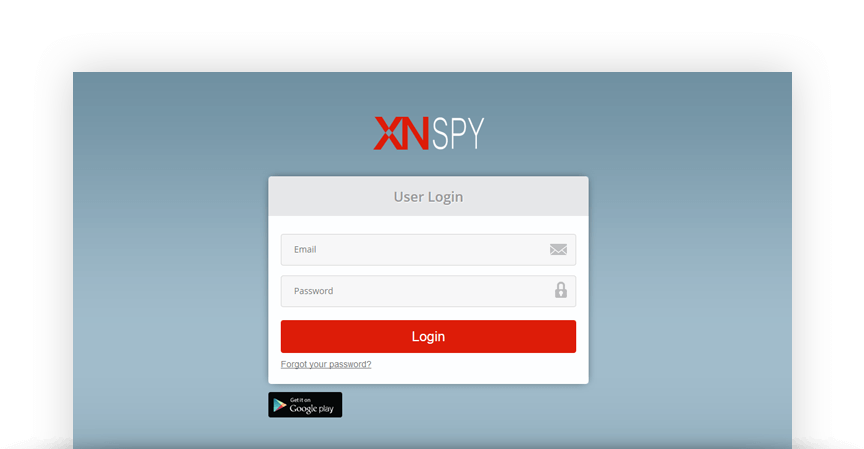 A screen will appear having a menu on your left-hand side. This is your Xnspy’s online Dashboard/ Control Panel. Choose ‘Photos’from that menu. This will open up the Phone’s photo gallery.

To find the WhatsApp photos, click on the search icon at the top right corner of your screen. 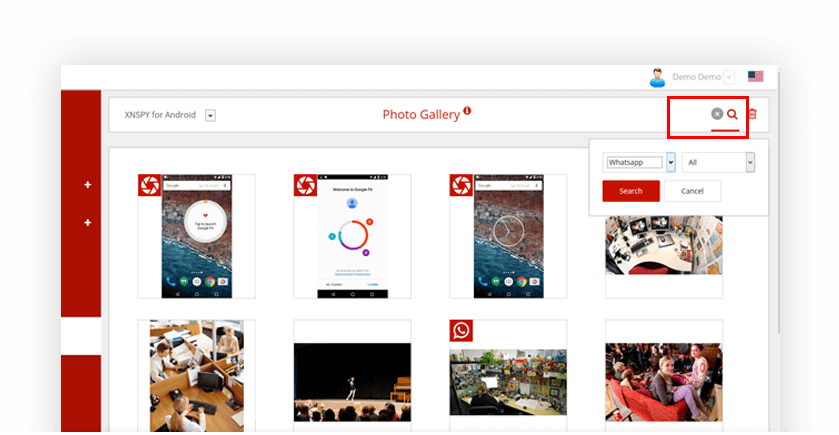 Choose ‘WhatsApp’ from the drop-down menu and click ‘Search’. 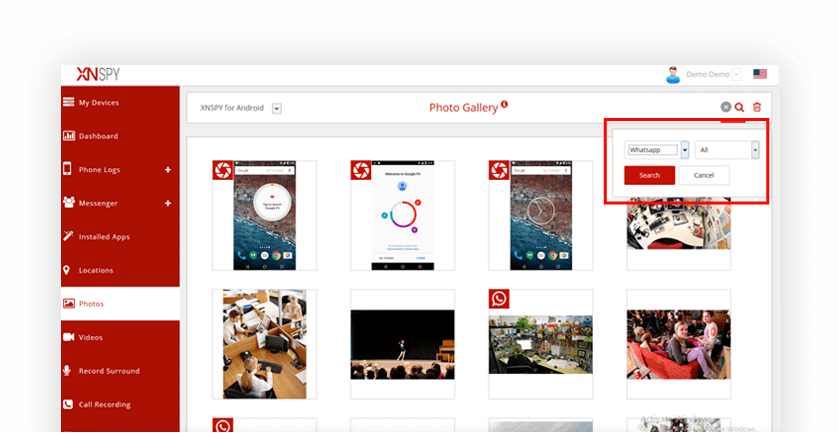 After this, all the photos shared via WhatsApp will be displayed. 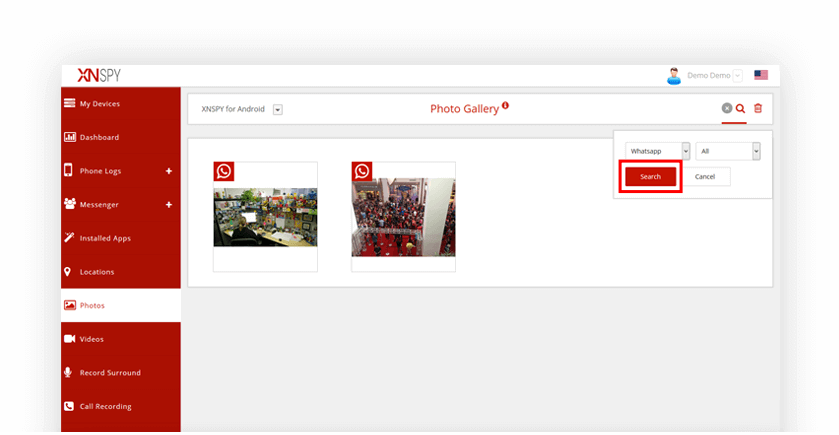 If you want to spy on WhatsApp chats and call logs via Xnspy, you will have to root the Android device. Rooting an Android device is pretty easy and quick. You can learn more about that here.

To spy on WhatsApp texts

This above keylogging method will get you all the typed texts, whether sent or not from the monitored device. However, for the received WhatsApp messages, that’s not the case.

This may sound tricky but all of this is happening at the backend. On the frontend, everything looks easy and convenient. And you still get enough WhatsApp chats and all of the photos to connect the missing dots. Currently, there’s no other app out there that can do better than Xnspy when it comes to spying on WhatsApp without rooting. If you want something easy peasy, it’s there in Xnspy.

This method is widely used, but only by the techies. Mac spoofing is free and fully discreet. However, as part of the prerequisite, you still need the device whose WhatsApp you want to spy on through Mac spoofing. The other thing about this method is that it’s extremely hard and the results are not guaranteed. Not because there are some loopholes with the process but rather the intricacy of the procedure that many people fail at.

What’s Mac Spoofing and what does it do?

Every internet-ready cell phone has its unique ID which is assigned by the manufacturer of the device. It’s like a social security number for your cell phones and is called a Mac address.

No two cell phones ever have the same MAC address. But if someone could successfully create a clone of a device’s MAC address, it can pretty much also get around the security barriers of that device. It’s the equivalent of masking your own phone’s MAC address with that of another person, hence the term “Mac spoofing.” Once you successfully clone the Mac address, you uninstall and reinstall WhatsApp on your phone.

When you do this, the new downloaded WhatsApp will be the clone of the target person’s WhatsApp account so all those messages sent and received on their phone will get to you, too.

How to spoof a phone’s Mac address?

Mac spoofing works not just on Android devices but also on iPhones, PC, and Mac computers. Though this process doesn’t require rooting of the target device, your own Android device needs to be rooted.

The first step is to get the Mac address of the Android device whose WhatsApp you intend to spy on. For this, go to Settings > About Device > Status > Wi-Fi MAC.

Once you have the Mac address, follow these steps:

This process, if done successfully, will let you get all the WhatsApp messages of the other person in real time. However, the part where you spoof the Mac address is tricky. Also, it requires your Android device to be jailbroken, if not theirs. We recommend you going for this procedure if you know some computer geek.

This is by far the easiest methods of all; plus, its free. The only thing is that you will surely get caught unless you are lucky. We’ll tell the reason once we tell you how you can spy using WhatsApp web.

The other issue is that you’ll need to scan the QR code over and over again.

If you want to access someone’s WhatsApp from your phone, using WhatsApp Web, this is how you can do it.

Aforementioned are the three best ways to spy on WhatsApp without rooting. The best thing about all these three methods is that they all are different from each other, not just in how well they do the job but also in their ease of use.

We believe you don’t have to pick one only, but if you would have to, that would be the use of a spyware. Let us tell you why.

Xnspy is a full-fledged spyware for Android smartphones. The wide array of spying features let you focus on more than just the WhatsApp of a person. With Xnspy, you can do the following and a lot more than that:

Xnspy gives you location history for every place visited by the monitored user. Each location comes with a date, time, and of course, address stamp.

Any photo or video that’s downloaded to the phone’s storage will also be available for you to review on your Xnspy account.

You can spy WhatsApp and other social apps, including Facebook, Viber, Skype, Kik, and even Tinder.

When you have Xnspy on a phone, you can even use the remote control gestures to lock a phone, or wipe its data, or take screenshots and record calls/surroundings.

On all Xnspy subscriptions