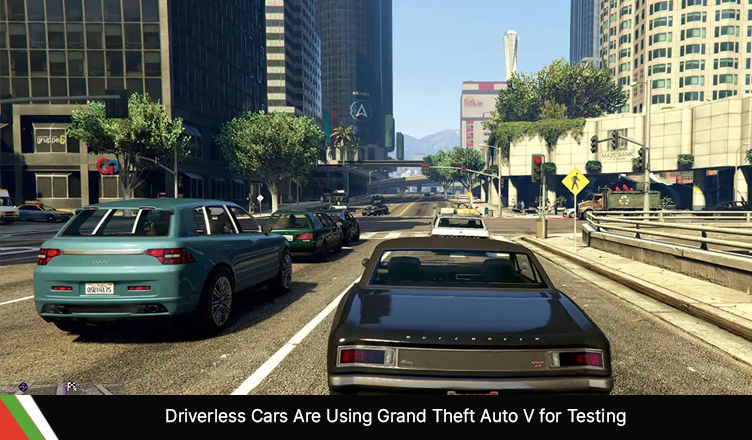 The artificial intelligence used in driverless cars needs a several simulations of scenarios to efficiently run without any accidents or hazards. And unfortunately, there are only so many hours in a day where there is enough traffic on the road to create conditions for a proper simulation (contrary to what  people in Los Angeles believe) and it’s not enough for testing of self-automated cars. Engineers at Waymo Inc. and other companies have found a way around this problem by using Rockstar Inc’s latest installment to the series; Grand Theft Auto V.

Driverless cars are equipped with lasers, sensors and cameras alike, but when the software running behind this hardware isn’t learning constantly, it could fall behind. Crazy situations such as cargo falling off a truck on the freeway or animals running onto the road need to be tested so that any unforeseen incident is avoided. “Just relying on data from the roads is not practical”, said Davide Bacchet, the head of a simulation effort names Nio that aims to bring forth an autonomous electric car to the US market by 2020. Learning through video games is not new, since a controlled environment leads to more accurate results.

With GTA V, you get as close to reality as possible. Researchers use algorithms from GTA V with slight adjustments to test for self-driving cars, since the established world in GTA V has 250+ types of vehicles, 1000+ artificially intelligent people and animals, traffic lights, an entire road system with 14 weather conditions, these conditions could test the artificial intelligence of self-driving cars to be near perfect.

The streets of Los Santos do have their glitches and sometimes they get wonky, but the fact of the matter is that is perhaps the richest and closest to real environment you can collect data from. Waymo uses these simulations to produce situations for every possible combination imaginable. Different speed, different traffic levels, reversed lanes, problems that might not even happen in real motoring, but Engineers at Waymo still can put this information to use.

If for some reason in real life a person has to interfere for a self-driving car because a mistake was made, the exact same situation can be played out in GTA V and information can be gathered from the simulation to fix any bugs.

The real challenge for artificial intelligence learning from simulations is to get as good as humans at driving. For all the mistakes we may make in traffic, we underestimate how good at driving we really are.  The real aim of any self-driving company is to get as good as humans, and the reason GTA V is used because people in the video game (pedestrians and drivers) replicate what real life humans would do. Sure not perfectly, but we can’t accurate results for cars possibly running over people at full speeds from real life, now can we?

Gill Pratt, CEO of the Toyota Institute said that simulations should “be an acceptable equivalent to real world testing”.