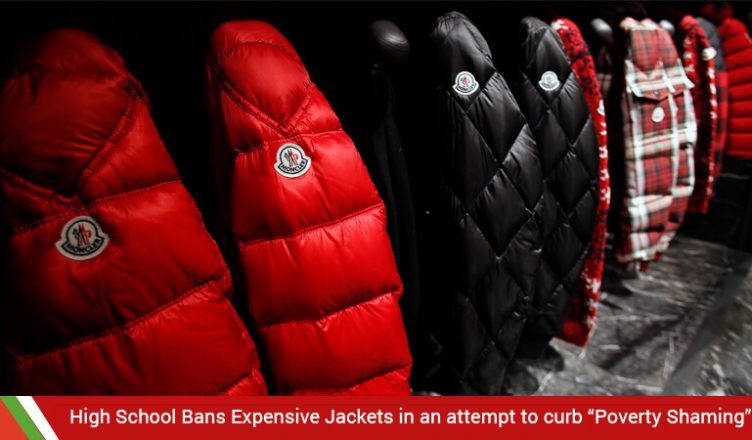 Following a series of bullying events where students, belonging to lower-income households, were subjected to poverty shaming, a high school in England has banned students from wearing expensive winter jackets. It is a part of the school’s aim to control poverty shaming.

Branded coats like Canda Goose, Moncler, and Pyrenex are now banned at the Woodchurch High School in Birkenhead so that those students who come from not-so-privileged families do not feel stigmatized.

The administrators of the school sent letters to the students’ parents to explain the reason for this ban that is supposed to come into effect after Christmas. The letter persisted that parents have to consider the fact that those students who saw their classmates or schoolmates wearing expensive jackets forced their parents to get them the same items as well even when it is way beyond their budget.

Rebecca Phillips, Woodchurch’s head teacher said in a statement, “We are very concerned as a school about poverty-proofing our school environment and, as such, we met with groups of pupils and made the decision in consultation with them.” She further said that students who are unable afford such expensive winter apparel, tend to feel stigmatized, inadequate, and left out.

Phillips also reported that children actually gave a feedback saying that the cost of these jackets is their month’s rent. The main reason behind this decision is to reduce a child’s anxiety that results from being unable to keep up with the fashion of their peers who can easily afford expensive things. She said that these coats lead to lot of inequality between our pupils and tends to stigmatize both pupils and parents who are struggling financially and are unable to afford such costly items. She further said that the pupils themselves came up to the school administration and talked about the pressure on the families as well as the pressure they had to go through themselves to wear these branded jackets and coats.

According to YouGov, an international market research firm, two-thirds of British population support this decision. Woodchurch is quite committed to reducing the difference between students. This ban is in line with other measures the school has taken. The school passed a rule two years ago that all students should have the same backpack. The school implemented a mandatory school bag after the parents complained of their children seeking costly backpacks from brands.

Along with that, it also lessened the number of non-uniform days as the students from disadvantaged backgrounds were getting bullied for the way they were dressed. The school is committed to the cause of equality in students. About 46% of Woodchurch’s population, which is a total of 1,427 students, are between the ages of 11 and 16 belong to low-income families

A former Woodchurch student wrote to the head teacher stating that the decision was a step in the right direction as a school should be a place for learning and not a place where they are made to feel inferior because of their economic background. Most of the school community supports the move and the letter explaining the policy was sent out to both pupils as well as their parents.

Ms. Phillips revealed that parents themselves approached the school and asked to introduce a ban before we wrote this letter. The items that are banned include apparel which costs between £400 and £1,000.

But look like the new rule has divided parents. According to Jackie Wilcox Murray, “I totally agree they should be all dressed the same so there’s no bullying. Most families these days can’t afford £500 coats whether they are working or not.”

While some were not in favor of this rule. Some parents argued that it should be left to the parents and their children what they want to wear without the school’s interference. Debbie Conlon said: “I work very hard, as does my husband. If I like to dress my son in designer clothes, I will. Nobody will shame me into doing any different.”

More than 1,000 people answered a Liverpool Echo poll where they were asked of their opinion if the policy was a good idea. The school has taken quite a responsible step to control poverty shaming that is also a form of bullying. Bullying of any kind is unacceptable and this step is definitely in the right direction to promote student equality.

80% of the respondents agreed with the imposed ban while 21% of them thought that this was an unnecessary step on the school’s part.

A spokesman for the Woodchurch High School said in a statement that, “It has always been our policy to minimize the cost to parents and carers of uniform. The decision was taken following consultation with representatives of the pupils themselves and has been welcomed by the vast majority of parents and carers who have responded to the letter.”