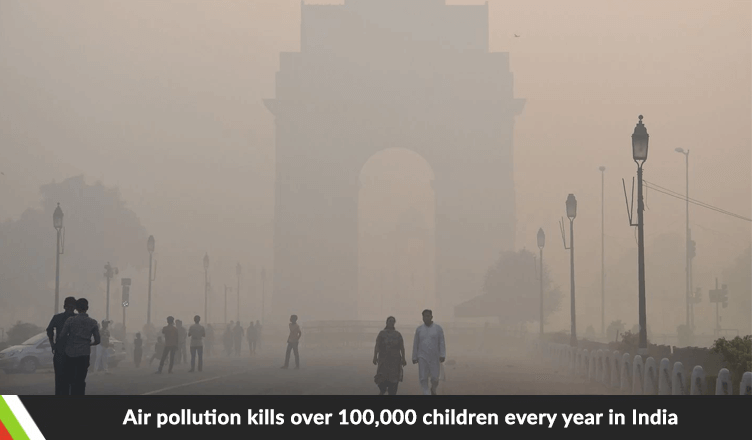 A damning study published for World Environment Day revealed that every year the noxious air hanging over Indian cities and towns kills more than one hundred thousand innocent children under five. India has recurrently botched to deal with all such environmental issues. In 2018, a UN report found that 14 out of the world’s 15 most polluted cities were Indians. The Indian government has neglected all these issues despite calls to action against pollution worldwide.

The Centre for Science and Environment (CSE) also published a report mentioning that 86 percent of Indian bodies were “critically polluted.” Another report from the State of India’s Environment (SoE) painted a bleak depiction of the environmental record of the recent Indian government by stating that air pollution is responsible for 12.5 percent of all deaths in the country.

Between 2010 and 2014, India’s Greenhouse gas emissions increased by more than 20 percent. “The country’s progress in renewable energy in 2018-19 has also been dismal. In wind, the country met only 6.3 percent of the target this year. In solar, it met 5.86 percent,” the CSE said.

According to the Global Burden of Disease report, air pollution is now the fifth largest killer in India. Startlingly, between 2009 and 2016-17 India also logged a 56 percent upsurge in the number of industries creating hazardous waste. On the other hand, the figure of grossly polluting industries rose 136 percent between 2011 and 2018. By 2050, India is anticipated to add more than 416 million town and city dwellers to the total urban population of the world.

Air pollution is the new tobacco. “We have no non-smokers in India,” said Dr. Arvind Kumar, a prominent chest surgeon and founder of the Lung Care Foundation in India. Due to the air pollution in the country, “everybody living in India is a smoker,” he added. The major contributors to air pollution in India are household burning emissions, coal combustion, agricultural burning, and transport.

“Air pollution is stunting our children’s brains, affecting their health in more ways than we suspected,” says Maria Neira, Director, Department of Public Health, Environmental and Social Determinants of Health, WHO. The experts highlight the reason that children are particularly vulnerable to the noxious impact of polluted air as they can breathe more rapidly than adults. Their developing lungs are the most susceptible to injury because they spend more time outdoors, are more active, and have immune systems that are still developing. For all these reasons, they absorb more pollutants. Air pollution not only triggers asthma and cystic fibrosis but childhood cancer. It has a negative impact on the neuro-development and cognitive abilities among Indian kids. Pollution leads to lower memory and IQ. It also causes psychological and behavioral problems. Children who have been exposed to higher levels of air pollution have more risks to chronic diseases like cardiovascular disease later in life.

But our Prime Minister Narendar Modi tweeted on World Environment Day: “We have been brought up in a tradition, where nature is equal to God. Where sanctity of nature is meaningful and where nature’s protection has been put at par with humans. On this Environment Day, we all need to spare some time to think about what we can do to make our planet clean and green. Living in harmony with nature will lead to a better future.” That’s all he had to say. Government’s National Clean Air Program introduced in January this year needs immediate consideration. This long overdue plan lacks clear mechanisms or robust funding to achieve its aims.

“This is an important step forward, setting a reduction target. This plan should also come up with a clear fiscal strategy,” said Ms. Roychowdhury, a director at the Center for Science and Environment, a nonprofit research and advocacy organization in New Delhi. “The plan requires more localized actions at the city level and the regional level with a clear timeline and action plan. That is the next critical step,” she added.

What should India do?