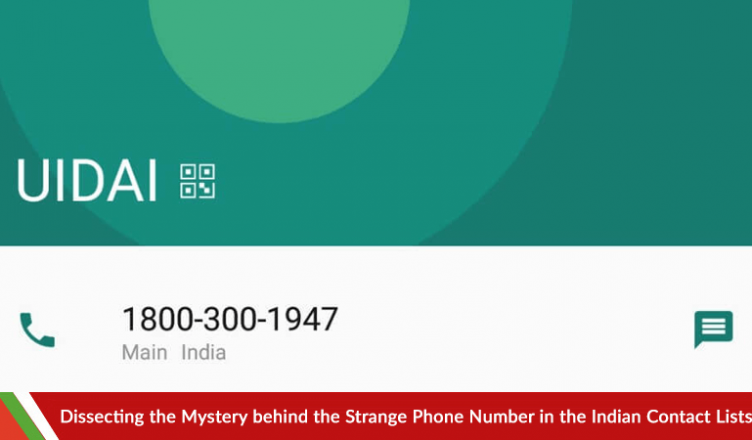 A strange phone number has crept into Indian Contact lists all of a sudden and people have no idea what’s going on. Millions of mobile users in India are confused from the past couple of days that how and why a strange phone number has slithered into their phone-books. This has become a top trend on the social media and people are posting its photos on Twitter and other platforms. Users are claiming that they didn’t add the contact to their devices. This whole saga from the past three days has led to serious privacy concerns among the mobile users in India.

On Friday, August 3rd, people noticed a new number in their contact list. The number (UIDAI), 1-800-300-1947, was added by default into every Android phone and there was no one to comment on how it got there in the first place. The same number can also be found on iPhones but only if its owner imported those contacts from an Android device before.

1-800-300-1947 is a toll-free number for the Unique Identification Authority of India (UIDAI). UIDAI is a government body that was first created in 2009 by the Indian government to generate 12-digit unique identification numbers for the residents of India. It is also responsible for managing and running the related information database. This number is just like Social Security number in the U.S. The purpose behind creating these numbers is to avoid frauds and help identify people easily.

So has the number been slithered into the contacts lists by the same authority? The government body sprung into action and has denied any involvement in the whole affair. It says that it has nothing to do with forcing the numbers into the devices. According to the UIDAI’s statement:

The Cellular Operators Association of India, representing Bharti Airtel, Vodafone, Idea Cellular, and Reliance Jio, also joined the debate and categorically rejecting its involvement over the UIDAI number being auto-saved on mobile phones.

So who could be behind this mystery that caused a social media furor as the users expressed their concerns about the “breach of privacy”?

Although the concerned authorities washed their hands off the matter, there was no one coming forth with the real reason behind this until Google stepped in with their explanation. By the end of the day, Google issued an explanation that it had updated all the distressed helpline numbers into the Android Setup Wizard in 2014 that also included UIDAI helpline number. This configuration change caused this number to appear on Android as well as devices running on other operating systems as it got transferred from one device to another.

Google further explained that as the numbers in the Android Setup Wizard get listed on a user’s contact list, these are transferred to the contacts on a new smartphone. This explains how a 2014 UIDAI number was transferred from old Android phones to new Android and iOS phones. Here is an excerpt from Google India’s official statement:

“Our internal review has revealed that in 2014, the then UIDAI helpline number and the 112 distress helpline number were inadvertently coded into the Setup wizard of the Android release given to OEM’s for use in India and has remained there since. Since the numbers get listed on a user’s contact list these get transferred accordingly to the contacts on any new device”

Google further allayed any concerns regarding unauthorized access to the Android smartphones as feared by many people. The solution lies in changing or tweaking Android Setup Wizard which Google has assured to do in the coming weeks. So by the end of the day, the mystery seems to have been solved.

Is there anything to worry about it?

You can also delete the contact from your phone but also have to delete it from other devices if they are synced with the same Google contacts account.

Google’s admission comes as a massive relief for jittery phone users. But security experts and regular users took all those concerned up to the task and demanded answers. There has already been a growing wave of concerns about the privacy and autonomy of digital device users in India. This UIDAI controversy comes in the midst of a Supreme Court judgment on the validity of Aadhar Act. Indians are getting weary of the data collected by the public and private sectors and exploiting it on an unregulated and arbitrary use.

There is certainly a need for better data collection and enhanced security at individual and massive level. In a country that is the world’s second largest smartphone market, it is a challenge for the authorities to protect the privacy of its users.