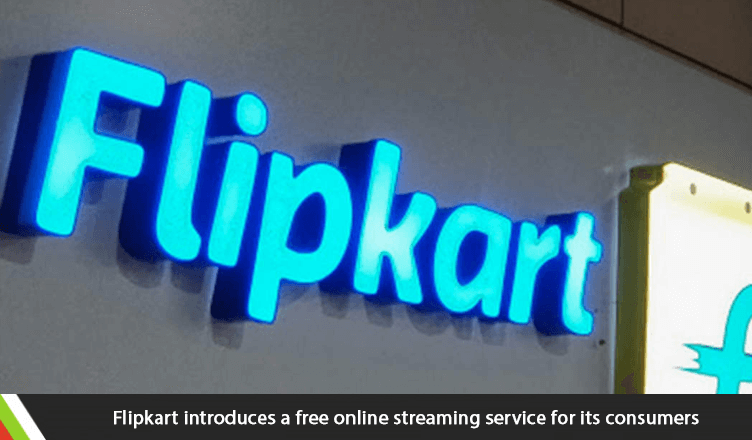 Flipkart is rolling out its free streaming services in India. The e-commerce company is owned by Walmart and is seeking to engage more Indian customers. The streaming service is called Flipkart Videos and will be part of the online mobile shopping app. It will be available to all customers, free of cost. Currently, only a fraction of the total internet users in India use e-commerce platforms for online shopping. The company aims to convert viewers into customers. Videos on the platform will include both short-form as well as long-form content.

In a statement, Flipkart announced, “We believe that our customers shouldn’t pay extra for premium content and hence our offering is different from anything else that is currently available.” The company will not produce its own content; it will license it from Disney and Balaji Telefilms.

In addition to the streaming service, Flipkart is also planning to introduce the Hindi language feature on the app. Since more than 530 million people in India speak Hindi, the aim is to make the app accessible to more Indian consumers. An audiovisual guided navigation will also be in Hindi and enable first-time buyers to make online purchases.

Walmart and Amazon are rivals in the US e-commerce market. With the introduction of Flipkart’s streaming services, the competition between the two companies will be even more fierce.

The move has come at a time when Amazon India is reigning the Indian e-commerce business. Amazon introduced its streaming service in India, Amazon Prime, in 2016. Many see the move by Flipkart as a threat to Amazon. Currently. Amazon charges its customers INR 129 per month. So Flipkart’s free streaming services could offset its rival.

According to Flipkart, “Most consumer’s first touchpoint with the internet is through online video content, and statistics suggest that video content and entertainment play a key role in bridging the gap for consumers to come online and experience e-commerce.”

Competition from other streaming services

Given the statistics, there is no doubt that streaming services are popular in the country. Amazon has about 11 million Indian users on its streaming platform, while Netflix has 5 million users. Flipkart will have to find users among these or reach out to those who currently do not use streaming services.

However, Flipkart is primarily an e-commerce business. Moreover, the content of the videos will help in determining whether the streaming service offered by the company will find an audience or not. It will be some time before we get to see how this move pays off for Walmart.

Looking at the larger picture

At the moment, e-commerce accounts for only 2.6% of the total retail market in India. Much of the Indian population is currently without internet connectivity and smartphone availability. Although tech companies such as Facebook, Google, and Amazon are investing billions of dollars for the widespread adoption of mobile devices and the internet, more needs to be done. Less than 40% of the Indian population does not have access to the internet. India provides a huge market for Big Tech companies. However, these companies face obstacles in increasing their influence.

Tech companies, including retail companies, are intent on increasing their influence among first-time internet users in the country. Tech companies are taking the initiative to provide free internet services to the Indian populace. Google introduced Google Stations as a move to increase internet availability around train stations. Likewise, Facebook has sought help from Indian telecommunications companies to bring the internet to India. It partnered with Bharti Airtel to introduce 20,000 internet access points.

Such initiative shows the enthusiasm that tech companies have in introducing the internet in the country. However, there is another problem to contest with. Although data packages are cheaper, the price of a smartphone is not.

At the moment, tech companies are fighting for a larger share in the country’s booming economy. However, certain obstacles prevent them from reaching their goals. The recent announcements from Flipkart seek to reach an untapped consumer base. It will take some time before the company can do so.