Skip to content
XNSPY Official Blog Sites > XNSPY Blog - India > Technology > How the market for smartphone apps has emerged and what this means for India? 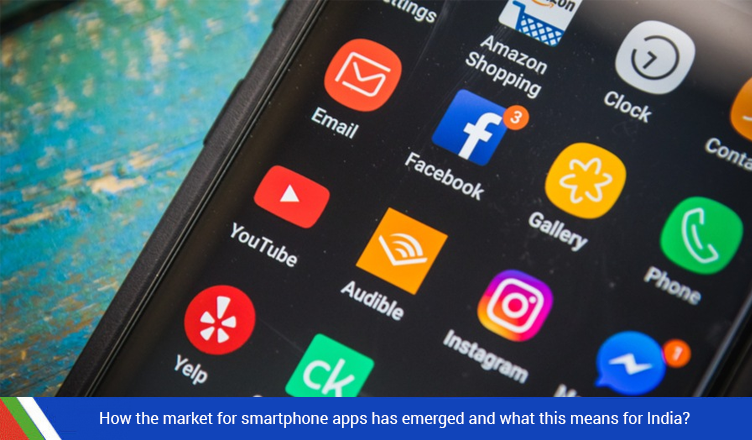 By the end of 2019, it is expected that India will have more than 800 million smartphone users. With each passing year, the number of smartphone users in India is increasing. There are several factors for this. With the younger generation more likely to adopt technology, the smartphone industry in India is booming. Furthermore, as the middle class becomes financially stable, they are more likely to purchase commodities.

India is among the fastest growing markets in mobile applications. This push has come as a result of companies aiming to provide better cellular services to customers. Jio is currently the leading cellular services with 98.8% 4G availability according to location, with Airtel and Vodafone providing 90.0% and 84.6% 4G availability in the county. This goes on to show that such improvements in cellular service are encouraging Indian customers to buy more smartphones. Moreover, it is also enabling them to use more applications.

A report by KPMG in India and Google lists down favorable reasons for the growth of the gaming industry in India. It is also applicable for other Internet-based services such as video streaming and social media applications. Mobile technology has become affordable in India. Furthermore, local app development companies have also emerged. As of 2018, there were 250 game development companies in the country. This has further increased the number of applications that are put in the market.

According to Quartz, 45% of smartphone users in India have Hotstar, a video streaming application, installed on their phones. Hotstar is followed by Jio TV, Amazon Prime Video, and SonyLIV. Home-grown applications are favored by the Indian public even as Netflix and Amazon Prime continue to make their place in the Indian market.

There are about 351.4 million social media users in India. YouTube and Facebook are among the most popular social media applications in the country.

Facebook is perhaps the most popular social media application in India. With over 313.6 million Facebook users as of 2019, this figure is expected to rise to 444.2 million users.

Several factors have played in the popularity of the mobile gaming industry in India. Increase in smartphone usage and cheap data rates are one reason for mobile gaming popularity. Furthermore, the ease with which these applications are downloaded, encourages more gamers to come on board. According to Google in 2018, PUBG and Subway Surfer were the most popular gaming apps in India. PUBG has an estimated 120 million users in India. Ludo King took the third place which was followed by Asphalt 9.

There are some applications that make governance easy. Some noteworthy home-grown applications have been introduced to smooth the election process include cVIGIL. This application allows people to report any violation in the code of conduct during elections. Similar apps such as Voter Helpline which shows relevant information about candidates intends to inform voters during the election season. Apps like these provide benefit to voters and can also be used to curb the spread of rumors and fake news.

The rise of Chinese apps in the Indian market

Despite the number of home-grown applications available to the Indian public, Chinese applications have found an audience in India. FactorDaily reports that out of the top 100 apps in India, 44 of them are Chinese. Apps such as TikTok, LINE, Helo, PUBG Mobile, SHAREit, and LIKE have a significant audience in India. Apart from this, utility applications such as BeautyPlus, Cam Scanner, Xender, and others are also in use.

The two companies behind the so-called invasion of Chinese apps in the Indian market are Alibaba and Tencent. These companies have grown by investing in local companies. Alibaba has shares in Snapdeal, an e-commerce company and Paytm, a digital payment application. Likewise, Tencent has invested in Ganaa, a music streaming app; Swiggy, a food delivery service; and the Ola, a ride-hailing application.

Such advancements have paved the way for Chinese backed application. There have been a few failures, such as the case with WeChat, a popular application in China which failed to perform well in India. But despite this, TikTok, a video-sharing platform, produced by the company ByteDance, is popular among the Indian youth. TikTok holds the number 1 spot in PlayStore in India.

The factor that has worked for Chinese apps is localizing the development of the app. LiveMe, a Chinese-based live-streaming application is working with local Indian talent to promote it. The company has studios in Delhi, Mumbai, and Bengaluru. It has also worked with actors including Shahid Kapoor, Ayushman Khurana, and Saif Ali Khan for promotions. Similarly, TikTok has encouraged local brands and influencers to promote themselves using the platform.

How the explosion of applications is affecting the country?

Seemingly, the explosion of applications in India provides benefit to people. These applications provide a medium of entertainment, connect people, and help spread awareness. But, these applications, especially instant messaging apps, are also causing harm.

One of the horrific incidents that engulfed India were the mob lynching cases, sparked by the fake news of child kidnappings. This resulted in over 46 deaths. This has by far been the worst incident that occurred because of fake news. Soon after the mob-lynching cases, WhatsApp reduced the number of people with whom one can share messages with five people. The share feature fuels mass hysteria often by spreading rumors. Social media applications such as Facebook and Twitter perpetuate fake news as well.  Facebook has made efforts to curb fake news on its platform. The platform has taken down fake accounts and partnered with Indian media organizations to separate facts from fake.

Recently, TikTok was banned in India and was consequently removed from Google Play Store and App Store. However, the ban does not affect the current users of the app. The reason for this ban is that the platform has allowed sexually explicit content to be easily regulated. Cyberbullying, harassment, access to pornography, and violence are some of the reasons that have also brought the application under scrutiny from the public and the Government.

A similar ban has been placed on PUBG in several districts in Gujrat for reasons that the game is addictive and harmful to the youth. After banning of the game, Rajkot Police arrested 10 people for using the game in public.

These incidents show that there is a need for legislation in the country to enforce policies that benefit the public.

The need for legislation

These bans have come into effect at a time when there is a need for Cyber Protection Laws. Currently, there is no legislation that regulates content on these apps. Here are some areas that need to be covered if such legislation is introduced:

Content should be regulated on social media applications including Facebook, Twitter, Instagram, TikTok, WhatsApp, and others. This can be ensured by being in close contact with reliable news outlets and media organizations that could provide fact-checking for sources. Furthermore, the spread of hate speech, harassment, and bullying need to be checked. Users who perpetuate these crimes should be held punishable by law in the country.

The ban on TikTok has shown that there is a fear of sexually explicit content available on different platforms. This is why parental consent should be implemented, where parents can decide whether a platform is safe for their children or not. This could prevent the Government from completely ban a site or an app as parents assert more control over how their children use applications on devices.

In the US, children below the age of 13 are not allowed to have a profile on social media platforms. This needs to be implemented in our country as well, where the majority of internet users are youngsters. An appropriate age needs to be decided to consider a child eligible for using a social media app.

Privacy is a major concern in the digital age. Legislation should be passed which gives privacy to the users of a platform. This is to avoid any misuse of an individual’s private data such as in the Cambridge Analytica-Facebook scandal.

To hold companies responsible for the kind of content that is shared on the platform, legislation needs to be passed to set out rules for how an app should be used. Fines should be set in case the company does not comply with the standards set forth.

India is a relatively new market for apps, where digital etiquette is often not discussed. This leads to the ease in the spread of rumors as in the case of the mob lynching. This is why a nation-wide campaign needs to be in place, especially in schools and universities, where responsible conduct on the internet needs to be discussed. This move will create an awareness of what fake news is and how it affects people.

As the smartphone app market in India is booming, there is very little regulation that is being conducted by the Government. The apps provide value to its users, evident from the popularity of apps such as WhatsApp, Facebook, and TikTok, to name a few. But there needs to be legislation and a regulatory body that ensures that the use of these apps does not affect the Indian community at large.

It is high time that the Government realizes this and does something about it.