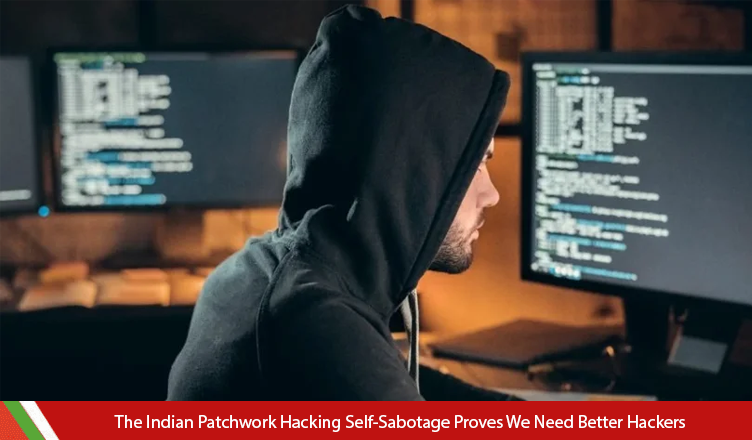 India’s hacker group Patchwork managed to make one hell of an error by self-infecting its network with a remote access Trojan (RAT) while attempting to infiltrate Pakistani education institutes. This incident was reported by Malwarebytes. Patchwork which also goes by other eccentric pseudonyms like Hangover Group, Dropping Elephant, Chinastrats, and Monsoon, has been involved in many RAT attacks since 2015. The group’s primary objective has been to steal data and use the attacks for ransom during its hacking campaigns.

Malwarebytes noticed something peculiar when it dove into the advanced persistent threat (APT) group’s activities after Patchwork managed to infect its systems using the group’s RAT creations. Malwarebytes identified keystrokes and screenshots of Patchwork’s systems, computers, and virtual machines.

According to cybersecurity researchers, Patchwork relies heavily on spear-phishing threats, which are custom phishing attempts focusing on specific targets’ email addresses. The emails include text files in RTF format, in which the BADNEW RAT Trojan gets amalgamated. The latest version of the Trojan got developed in November last year and is named Ragnatela. The malware can capture screenshots, log keystrokes, list down OS processes running in the background, list down machine files, upload additional malware, and carry out malicious executables.

Rangnatela hides in plain sight and attaches itself as a virtual component used specifically in Pakistan’s official communication documents by higher-ups. And a known vulnerability in Microsoft Equation Editor causes it to automatically run.

Patchwork was able to infect its development workstation with Ragnatela, which allowed the researchers to see those using VirtualBox and VMware virtual machines (VMs) to perform malware testing.

So clearly it was a big deal that only one cybersecurity research firm managed to notice. It begs the question of what can be done to prevent such attacks in the future?

Preparing oneself for malicious attacks requires thorough planning, research, and investment into the mind of a hacker. And it’s a cat-and-mouse chase, where hackers are one step ahead of the authorities. To level the playing field, cybersecurity professionals have to play fire with fire. And the only way to do it is to analyze existing hacking techniques. Thus preventing malicious hacking isn’t possible without ethical hacking.

To protect themselves from ransomware attacks, organizations have to take a long hard look within themselves and must assess their current security policies and verify there are no gaps. By loopholes, I mean any system flaws that may go unnoticed. Penetration testing, a method of limiting system vulnerabilities, can be useful in preventing attacks by examining how hackers work and exploit certain flaws.

As a result, prevention, detection, and reaction capabilities are critical components of an internal data protection plan that all firms should establish and implement.

Beyond fundamental cybersecurity methods like reviewing current IT infrastructures for vulnerabilities, installing critical upgrades, and conducting backups regularly, more is required. With today’s technology, constant training and testing have become necessary as these strategies help organizations familiarize themselves with the phishing techniques being employed. And as we all know, knowing is half the battle.

And luckily, reading the mind of a hacker isn’t as hard as you may think. The reason is hackers work on predictable patterns and they mostly capitalize on human error. So a knowledgeable person has a very high success rate of thwarting off a majority of hacking attempts by using common sense, intuition, and experience.

Let’s take an example of a popular malicious hacking technique known as phishing.

Phishing attacks heavily rely on human interaction and focus on untrained individuals. They focus on people who get caught off guard because they were inattentive, distracted, and didn’t err on the side of caution or who get accidentally caught up in a well-planned attack. In this strategy, hackers predominantly rely on human mistakes. Phishing attacks often entail impersonating another individual and exploiting that information to gain access to a secure network. Data gets gathered from internet forums and social media. They may even dupe people into handing up their personal information. It is the same simplistic trick as the age-old bogus email scam. Hackers target unwary consumers who get duped into disclosing personal information in return for an imaginary pot of gold.

But malicious actors underestimate their opponents and overuse their bag of tricks, making them entirely predictable and defenseless to retaliation. Their overconfidence is what brings them to their knees. Just look at a recent incident where an Oxford teen got exposed by his business partners as the head of cybercrime gang Lapsus$.

Due to how prevalent malicious hacks have gotten over the past decade, software firms have been trying and testing new products that reverse engineer hacking principles to protect consumers from popular cyberattack techniques. A prominent category is remote monitoring apps.

Most hackers obtain network access by transmitting dangerous code via e-mail. Cybersecurity teams cannot authentically identify the email originator unless they gain special access privileges. XNSPY features a specialized email sniffer that detects and removes malware, viruses, and Trojan threats propagated through workers’ emails. The program separates the emails from the rest of the network, saving precious time and money.

The cybersecurity team may then independently examine every email for harmful code or links that could infect the network. And, because XNSPY operates on a distributed model, the security team may remotely update the email by labeling it as read, classifying it as safe, or completely removing it. This gives larger firms a massive upper hand since it allows cybersecurity professionals to split the workload among themselves and each other. It saves a lot of man-hours and reduces the odds of anything getting overlooked.

Even an intricate and complex attack such as the RAT infestation could have been prevented by XNSPY as it targeted users’ emails and spread in a word document. Thus, the need for advanced technology and better training has become imminent due to rising cyber threats.