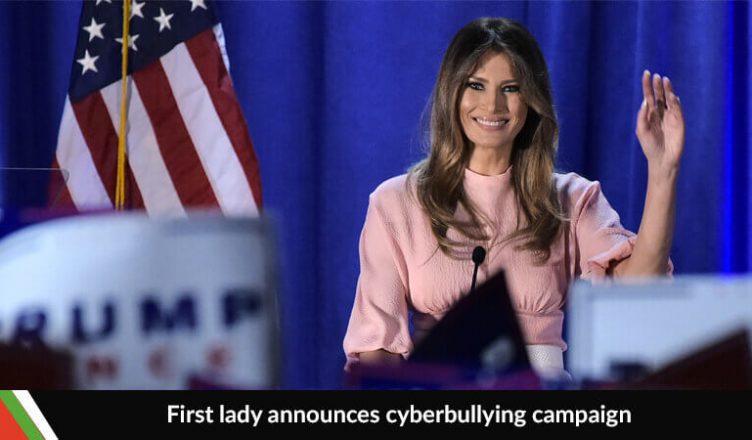 First Lady Melania Trump announced the set of initiatives to help children on Monday while standing at a podium in Rose Garden at the White House. She said that “They are our future,” adding: “I want to nurture and protect the most valuable part of our society – children. Our generation’s moral imperative to take responsibility and help our children”

While speaking about her initiative, Mrs. Trump said that social media has both positive and negative effects on the children but is also used in negative ways. When children are taught positive online behaviors from the start, social media can be used in productive ways to enforce positive changes.

The First Lady has indicated in the past that she aims to focus on cyberbullying along with successfully developing positive habits in children while using social media. Furthermore, the initiative aims to help the American young children to speak with kindness and respect to others.

Melania has stated in the initiative introduction that “Technology is constantly evolving. So are the risks associated with it. You can reduce these risks by talking to your kids about how they communicate online and offline and encouraging them to think critically and act in a way they can be proud of.

She has partnered with the Federal Trade Commission in promoting a booklet about online safety and social media titled: Talking with Kids about Being Online. It is quite similar to an FTC booklet that was produced back in 2014.

According to this guide, cyberbullying is described as ‘mean comments’. Moreover, it provides you with suggestions regarding how one can tackle such issues. The booklet reads that if the child is being targeted by a cyberbully, you need to keep your head cool and clear.

Mrs. Trump encouraged adults to promote the values of compassion, encouragement, kindness, and respect online in February. In March, during a White House tech summit, Mrs. Trump said that she was being criticized for her commitment regarding tackling of this problem and it is going to continue but none of it was going to stop her from doing what according to her, is right.

The recent wave of young deaths because of Blue Whale Game is an example how real and ugly peer-pressure and cyberbullying can get and play a major role in urging the kids to join unsafe online chatting portals, etc. Social media serves as the ideal haven for cyber-stalkers, bullies, and predators where users openly talk about everything that they are doing without realizing that all of this could be used against them along with their personal information.

According to Stephanie Grisham, Melania’s spokeswoman, Mrs. Trump’s goal has been children all along. The launch of this campaign is going to validate her role in the coming three to seven years.

Grisham also said that the first lady is expected to devote the rest of Trump presidency to the issues the children are facing today and to their well-being.