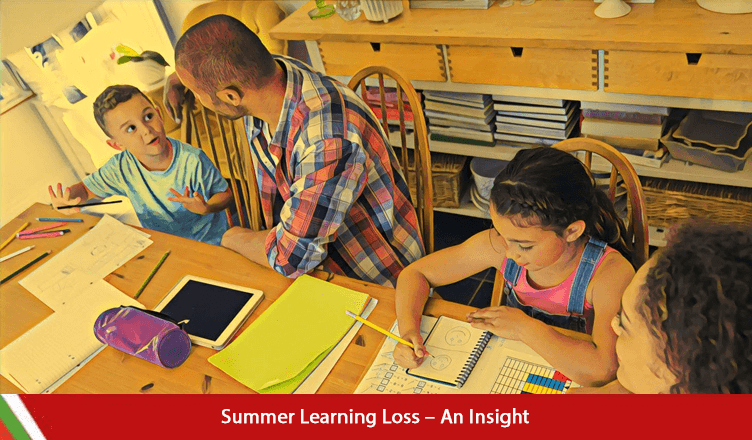 Summer learning loss isn’t a term many are familiar with. Summer learning loss is the loss of knowledge, and academic skills children experience during the summer break from school. Experts still debate why this happens and the extent to which children are affected. Many teachers report it is a real issue for many students at the beginning of the school year

Summer Learning Loss is not a new concept. The original research was released in 1996 containing data which was collected from the 70s and 80s. The research led to a decades-long search to seek answers about what children’s learning goes through in the summer months. Summer learning loss is also called Cooper Analysis, named after its lead author Harris Cooper. He wrote in detail about his findings, and according to the studies, it was revealed that during the summers, children lose over a month of school-time learning. As children grow older, the negative impact begins to aggravate.

The later research included a 20-year study which spanned from 1982 to 2002. Researchers have also debated the reasons behind learning loss during summer breaks. Some debate that the learning gap is established before the age of 5 and researchers were able to determine this after they observed 9th-grade students.

Learning Loss according to Teachers

Teachers also agree that learning loss is very real. And there are so many things parents can do about it. Though summer learning exists, it does not affect children in the same way. For example, if a child has trouble making friends and socializing with others when they get back to school after summers, they suffer more in that area. As the structures which teachers put into place to assist the child in becoming social get damaged and often disappear during that time.

During the summers, children don’t have the support they need to grow and develop. They spend a lot of time among the things that are the reason behind the issues. So, when it comes to socialization, it could be due to family dynamics, lack of people to interact with, or limited choices in the neighborhood regarding friends.

This loss eventually translates to academics and especially for those children who are already struggling in studies. Parents are already pretty tired from the daily school night fights so, they also let the children be on their own. As a result, when parents and children do not pay attention to those academic struggles for two months, it can lead to two years plus of learning loss. This gets frustrating for teachers even because they work hard all day long with a child so that they can good grades. And the students pretty much throw that effort down the drain when they stop working/studying over the summer.

The result? When children return back to school in the fall, they fall further behind than when they had left. And as the knowledge level and the standards increase for the next grade level, children not only lost learning but at the same time they try to get back to grade level and catch with other classmates who studied in the summers moved forward.

It is the children who are affected the most

Dr. Marc Lerner, a spokesperson for American Academy of Pediatrics (AAP) and the chair of the AAP Council on School Health, says that though the research and studies on summer learning loss are old, we do know that the low-income children suffer the most. It has been estimated that after elementary school, there is the possibility of as much as three grades worth of learning loss in these kids.

When learning loss takes place at such a level, it does not fall under summer learning loss only. These things could be snowballing and lead to the income gap between high and low-income families and the progress of their children.

Lerner also showed concern regarding the loss of multiple school resources for students during the summer break, which includes food programs. There are a lot of kids who rely on schools to get free food or a reduced cost breakfast/lunch programs. These programs also disappear in the summers rendering several children helpless against the impact of hunger.

Many children receive support services like occupational and speech therapy from schools. When these services are not there, in the summers, these children fall behind in the progress they could have been making otherwise.

According to Lerner, families should look around the area they live for resources during the summers. Many states have scholarship programs for day camps. They also provide a variety of activities that could provide children with learning opportunities. They could also find other school benefits in access, which might have been lost due to summer holidays, including food programs.

He explained that federal funding exists to support summer learning experience, but it does get enough funding that could help in making the school year longer. Also, not broadly accessed. Parents could receive daily emails that contain activity links to educational resources. Some libraries often offer programs too.

Moreover, teachers play a significant role. They are a good resource for the parents who wish to learn more about the various programs that are offered in their area. This could largely reduce the impacts of summer learning loss. This is helpful for those low-income families too who lack the financial ability to afford expensive summer camps for their children.

An associate professor of public affairs at the University of Texas Austin, Paul von Hippel, inquires whether summer learning loss is really a big concern the way parents have been informed about it. Studies that took place in the 1980s revealed that children end up losing most of their reading skills and math, which they learned in the previous three months of school. Hippel says that recent research has revealed that the loss is much smaller even if it exists.

Summer learning skills are still of great value for children who lag behind because it lets them catch up. And there is no harm in urging children who are on track to expand their horizons and explore their interests during the summers with the help of summer programs.

How can children keep up from home?

The dynamics and challenges of every family are different. And they might make it more difficult to keep a child stay on track. Here are a few suggestions for parents to help their kids prevent summer learning loss during the summer:

Parents could take learning as a daily activity, and the child wouldn’t feel as if he is studying all the time. When the time is nearing to go back to school, don’t try to cram it all back in, do a little each day for 5 days a week and you will be fine.