Skip to content
XNSPY Official Blog > Parental Control Apps > This is how social media is messing with our behavior patterns! 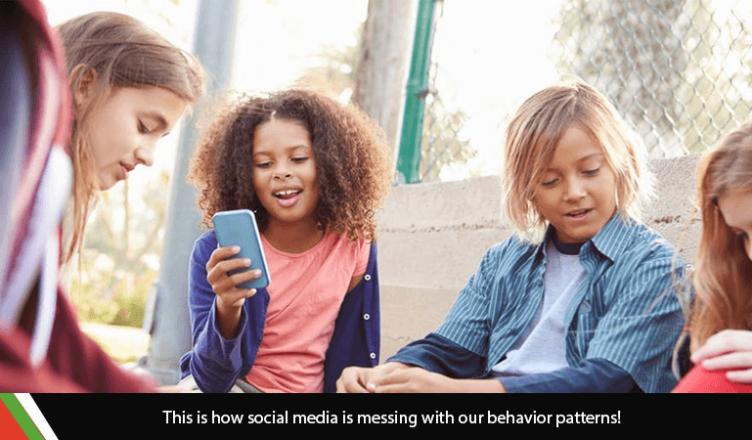 Have you ever found yourself picking up your phone and opening up Facebook immediately after closing the app? Or do you find yourself constantly switching between different apps? Either way, we hate to break it to you, but you’re addicted to social media. However, the good thing is that you are not the only person to have done this. Many people find themselves addicted to social media. It may sound outrageous, but social media addiction is not entirely your fault. There are more sinister reasons for why you’re addicted to these sites.

Why is user engagement important for social media sites?

Because it means more money!

The user interface of social media platforms is built to seize the user’s attention. There is a reason why social media platforms are so addictive; they want their users to be engaged on their platform. These companies tweak their sites constantly to make them more favorable to users. These platforms abuse human psychology by reaching out to our most basic needs such as validation from others. As a result, our minds are being conditioned to react to a stimulus in a certain way.

Do you scroll through your social media when waiting for someone? When hanging out with friends? Before you go to bed? On the toilet? The infinite scroll was designed to keep users engaged on the platform.

Developed by Aza Raskin, the infinite scroll allows users to scroll through the newsfeed and posts. This feature is not limited to Facebook or Instagram but also on other websites like Pinterest, Tumblr, etc.  Infinite scroll has no end, so people find themselves scrolling aimlessly. In an interview to BBC, Aza Raskin said, “If you don’t give your brain time to catch with your impulses you just keep scrolling.”

Users are not actively engaged on the platform. They waste their time. They use it as a means to escape the real world.

Have you noticed that when you open an app, it takes about 3 seconds for the posts to load? It is by design and is similar to the working of a slot machine. Pulling down the lever on a slot machine is an action that you perform which has a variable reward. This term refers to either winning or losing a reward.

The same happens when you refresh the newsfeed on Facebook and Instagram. The 3-second delay is deliberate because it builds up your anticipation for a reward. According to an article by Vice, “…expectation is part of what makes intermittent variable rewards so addictive. This is because, without that three-second delay, Instagram wouldn’t feel variable.”

Without delay, there is no anticipation of getting the reward. Slot machines are addictive. Social media sites use this to their advantage; this is why you feel like opening the app on your phone again. Users come to it, again and again, to receive their reward or try again.

How many times have we checked our phone for the number of likes your post has garnered? Many of us are guilty of this. We use the like button as validation of our popularity and how well-liked we are. Sometimes, we even use it as a metric for self-worth, not realizing how damaging it is for our mental health.

The feeling of liked by everyone is short-lived since we’re always looking for more likes. One of the people behind this feature, Justin Rosenstein said, “The main intention I had was to make positivity the path of least resistance. And I think it succeeded in its goals, but it created large unintended negative side effects. In a way, it was too successful.”

We are often compelled to like someone’s post because they liked ours. The push notification on Facebook notifies you in case someone has liked, shared or commented on your post. So users may react by commenting and liking. It forces you to check what the other person is saying by logging onto the site again and again.

Because social reciprocity demands that we reply to other people as soon as we get a message, it makes people pick up their phone immediately. The push notification feature worsens this habit and is the reason why we have decreased attention spans. A notification can push you away from the task that you’re currently doing to check your social media. It also affects our focus.

Snapchat’s streaks are an ingenious way to have people hooked on the platform. A streak refers to uninterrupted snaps that users send to one another. It increases user engagement by forcing users to come back to the platform. People, especially teenagers, go to extreme lengths to maintain by asking their friends to “babysit” streaks.

It shows how extremely behavioral patterns are affected. The user no longer enjoys the platform, but instead becomes a slave to it.

How does this affect user behavior?

In an article by Mattha Busby published in The Guardian, the author says that social media is using techniques similar to gambling to create “psychological dependencies” so that their product becomes a permanent part of users’ lives. In many ways, the techniques social media uses causes the same responses in a human as cocaine would. These sites ultimately create “psychological cravings” and can make a person believe that their phone is buzzing even when it’s not.

Users feel that social media provides them with a safe place to express their opinion. It cuts them off from the world. It gives them an alternate reality where everything is in their control. But as we have seen, this is not the case.

Social media platforms seem to provides validation to people through likes, shares, and comments, hence, creating psychological dependencies on the platform. It may lead to mental health issues such as depression and anxiety when a user does not get the validation they seek.

But don’t be fooled. The ephemeral quality of the social media platform makes people miserable. They find themselves returning to the site for the same feeling. It sounds similar to someone suffering from an addiction.

Social media is making us emotionally unstable, anxious, prone to depression, and addicts. It is chaining our behavioral patterns by limiting our attention span. However, social media platforms are not completely bad. In fact, because of their existence, there is awareness about different issues that people face. But the negative consequences of the platform must be taken into consideration.

Activists and developers are calling out companies for how their platforms impact human behavior. As these companies fight for our attention, they are causing irrevocable damage to our mental well-being. When will these organizations realize this? Activists are asking for companies to employ better practices that will make these platforms safe for people.

However, it will be a long time before these companies realize this. As individuals, we need to be aware of the negative impact of social media on our mental health. We need to control how we use these platforms instead of these sites controlling us. We need to be more conscious about the changes in our behavior that these sites cause. If you notice that you spend too much time on a social media site, maybe it’s time for you to stay away from your phone. The point is to control your reliance on a social media site before it becomes an addiction.