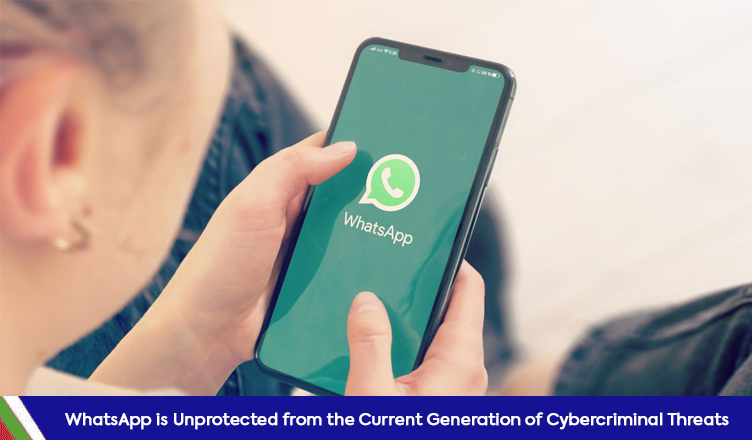 Cyberthreats have been around since the old Internet days. But fast forward to 2021, and they are the biggest threats to any IT company. They have now taken on the role of an intrinsic part of the Internet experience.

We have experienced the days of malware campaigns initiated via emails. Soon after, we saw the advent of emoji packs. It was another malware attack campaign. And now cybersecurity threats have shifted to smartphones, targeting messaging apps specifically. WhatsApp is the biggest perpetrator of this phenomenon.

Cybersecurity threats have shifted to smartphones

One of the most noticeable cybersecurity threat patterns over the past decade has been smartphones’ use in phishing incidents.

Smartphones naturally are much more unsecured than a computer. The average mobile device is less likely to be protected against phishing when compared to a computer network.

Hackers are forcing users to rely on their phones

Threat actors may also combine email and mobile messaging in a single assault, such as sending a phishing email with a QR code that must be scanned by a smartphone, thereby moving the attack to the mobile endpoint. It is quite an advanced technique that targets smartphones specifically since many smartphones come equipped with QR readers.

Hackers are now trying to force people into opening links only accessible via smartphones or specific apps, like in the case of the above example.

We’ve witnessed an increase in QR-based assaults as the previously underutilized technology has erupted in popularity.

Hackers have become adept at exploring and exploiting their target system’s flaws. The target organization is unprepared for these kinds of assaults. Organizations most often react too late to a cyber threat. Organizations never expect to become a victim, only a bystander.

Threat actors are attracted to WhatsApp’s popularity. They see it as a golden opportunity for get-rich schemes that are ransomware scams. As of October 2021, 2 billion people across the world use WhatsApp.

It just goes to show that the ball is in the threat actors’ hands. Just because of how many people use WhatsApp as their primary source of daily communication, they have great success odds.

Just recently, Pegasus, an Israeli spyware program made the rounds on international news channels. Pegasus would get installed on people’s phones by hackers contacting them on WhatsApp. Hackers had access to the phone owner’s data, even if they didn’t answer the anonymous phone call.

While WhatsApp has published a Pegasus fix, there is no certainty that this incident won’t repeat. Pegasus specifically targeted WhatsApp because the chances of a person of interest using that app are gargantuan.

It is not always WhatsApp’s fault

Because they continue to succeed, most attacks still rely on a small list of techniques and approaches. It’s not inherently WhatsApp’s fault that these attacks occur. Some of these flaws are inherent to the medium it’s operated on, that is, the mobile phone’s operating system.

Smartphones are now following the route of planned obsolescence. It means smartphones have increasingly shorter lifespans. So they become obsolete quicker. It causes smartphones to get outdated quickly. So they won’t receive any security updates in the future.

It leaves them exposed to threats that could be prevented easily if the mobile device had operated on the latest security patch. Developers patch any known vulnerabilities after thoroughly testing them in isolation and part of the whole operating system both.

Having your phone running the latest security patch is therefore crucial.

What can users do to secure their WhatsApp?

Users need to be aware and educate themselves on the variety of cyber threats existing in our digital realm. The responsibility lies on their shoulders. Most malware attacks can stop in their tracks. With minimum effort and caution, in most scenarios. Always assume everything is a threat; presume that everything that appears fishy is most likely phishy.

Although phishing emails have evolved significantly from the earlier days of broken English, nonsensical communication patterns of yesteryear, there will always be red flags. Language and design discrepancies should raise red flags that users need to be aware of. They should always double-check that the sender’s display name matches the email address.

Double-check any links before opening. And if it is a corporate email, it can be swiftly verified by checking official websites, email signatures, or using search engines.

Businesses can also assist their employees and consumers by offering a convenient way to report phishing. Customers should readily report suspicions to the company. Workers should have direct access to their IT security staff, ideally via a specific anti-phishing and restoration tool.

Even if an employee’s mobile device has a corporate email application installed, open channels like SMS and WhatsApp will get beyond whatever anti-phishing security it has. Despite end-to-end encryption.

XNSPY is one such remote monitoring app that is frequently featured on list of handpicked WhatsApp spying tools of 2021. It can help keep user data safe from these phishing schemes, malware, and ransomware threats.

XNSPY allows employers to act proactively and think creatively before a threat becomes imminent. And since it has the ability to remotely spy on WhatsApp activities, you’ll find it in almost all hand-picked tools of 2021 for WhatsApp spying.

Employers can utilize the service’s screen recording and WhatsApp monitoring to secure employees’ data from getting into the hands of said actors. Users can remotely spy on WhatsApp activities such as messages, calls, and multimedia sent and received on the target phone or tablet using this app.

Employers can also verify the sender’s identity and phone number, as well as other facts such as the date and time stamps. It will help them in recognizing a pattern as the app will be installed on multiple devices, of all the staff.

The organization will now have a database of all the ransomware incidents that might have occurred in the past thanks to the remote monitoring app. Once the establishment has identified a pattern, it will be well-equipped at preventing future threats.

Employers will know to inform their employees immediately when they are about to open a suspicious link depending on the data they have gathered with time using XNSPY.