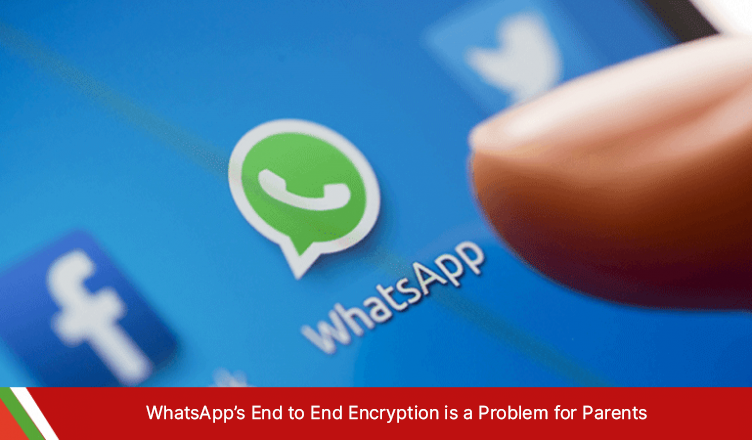 WhatsApp went through a plethora of changes in the past year but none more important than the security features that have set it apart from all the other mainstream messaging apps available in the market to download and use. This is the End-to End encryption feature that WhatsApp has become infamous for and has caught much controversy too.

Although WhatsApp was praised for its focus on privacy but it received a lot of criticism from authorities and concerned parents alike for its excessive thrust for end to end privacy. WhatsApp recently reached one billion active users who use the service every day. So one can never be sure of who a child just might be in contact with and this makes it extremely hard for parents who are concerned for the safety and well-being of their beloved kids to keep an eye on what they are doing and who they are contacting. It makes it even harder when authorities’ parents trust cannot access the necessary media to catch these predators.

What is WhatsApp’s End to End Encryption?

End-to end encryption in simple terms is hiding sent and received messages behind a locked door- the key to which is then thrown away. WhatsApp claims that oppressive regimes, corrupt governments, not even themselves can get into the encryption behind the WhatsApp messages. The only two parties who will ever read the message are the ones who send and receive the message.

No one else can access these messages even if they try. Of course at face value this sounds like a great thing but what is most terrifying is that know will have any way of telling who a user was in contact with if for instance they are kidnapped or even are lost. XNSPY is an app that can help all such concerned parents around the world and give them the tools to protect their children from any harm.

While this end to end encryption feature was introduced so that a user remains completely private while using the service it has serious implications on the security of the individual using it. If a child receives a message from a completely unknown number to which the child responds- parents have no way of knowing who their child is in contact with and what kind of messages they have been receiving. Furthermore if a child is then coerced into sending explicit media, the parents may never know- until something bad happens.

WhatsApp users have to be extremely careful these days as lists of phone numbers are constantly being put online by malicious hackers who infiltrate phone companies’ databases. These numbers of course include the phone numbers of children and teenagers. This is also how many strangers online get into conversations with teenagers. They will then manipulate these teenagers to send nude images of themselves and much more. There needs to be a check and balance here but unfortunately the end to end encryption mitigates that and tosses it out the window.

Usually the government or a concerned authority such as the FBI will step in and nip this whole matter in the bud. But with the end to end encryption WhatsApp has now implemented these authorities and parents cannot intercept these explicit messages as their hands are completely tied in this matter.What is even more concerning is the thought that many terrorist organizations are now using this to their advantage.

During the tragic Westminster attack in the United Kingdom, the attackers is said to have conspired using WhatsApp and remained hidden due to this end to end encryption.  The messaging service was even criticized for giving a place for terrorists to hide. The terrorist used WhatsApp to send a message before he went on his killing spree. Since intelligence agencies were not able to catch him due to the end-to-end encryption, he was easily able to carry out those heinous acts without getting caught.

Now this is a serious cause for concern for parents around the world. Internet predators have become increasingly more creative with how they contact children and manipulate them for their own gain. Terrorist organizations are also recruiting young and impressionable children and teenagers online and services like WhatsApp are just what they are looking for.

But the most immediate threat children face is those from online predators. Recent studies have shown that 60% of children are asked for nude images and a surprising number actually do send these pictures. In most cases the predator will manipulate the child to carry out sexual acts or even may try to set up a meeting with these children. So parents need to be wary and use tools like XNSPY to their advantage.

How Parents can use XNSPY to protect their Children.

Parents wouldn’t be hardpressed to find a plethora of WhatsApp tracking apps on the internet, but finding one that doesn’t break the bank and performs reliably can be tricky. This is exactly where Xnspy comes in.

XNSPY provides a way for parents to combat the online predators on WhatsApp by giving them a way to intercede before and if something happens. XNSPY’s WhatsApp Features are great for parents to monitor their children’s interactions on the messaging app.

XNSPY provides parents a way to monitor their children’s sent and received messages, view call-logs and even view deleted messages. With this a concerned parent can keep in view their child’s activities and make sure that they are not getting into unwanted trouble. The other party may not know that a concerned parent is viewing their messages and thus may continue to use their phone without any changes.

See Also : How to Spy Whatsapp on  iOS and Android?

XNSPY will allow a parent to view any and all message threads their child might receive. The end-to end encryption is bypassed and messages can be read without any trouble. Messages sent and received in real time can also be viewed by the user. Call-logs and media sent back and forth between users can also be monitored. So parents can rest assured that their children’s safety is under watch and can be monitored. Here are also a few things you may need to know about WhatsApp and Android phones.