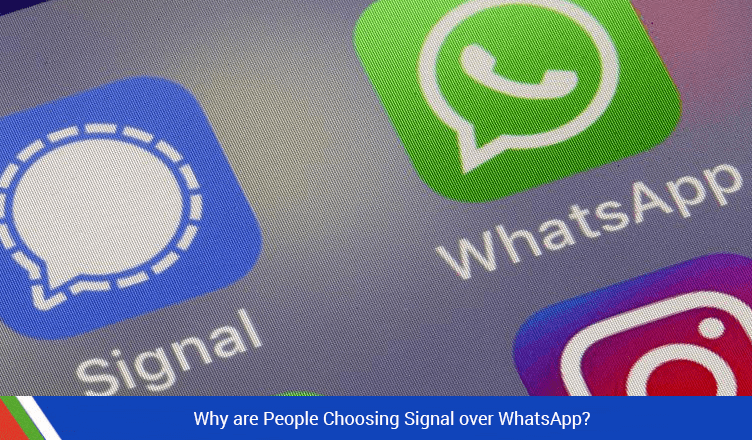 When it comes to IM apps, it is all about privacy in 2021. And recently when the Facebook-owned WhatsApp, the most popular messaging app, revised its privacy policy. Not everyone was happy.

With the new update, the app’s supposed to share more and more of a device’s data with Facebook. So, literally what happened is that people started looking at alternative apps for secure messaging. And that is when they came across Signal.

Signal Is Not a New Messaging App

To everyone’s surprise, the Signal IM app was first released back in 2014. But somehow everyone missed its presence. Even though its competitors (WhatsApp and Facebook Messenger) were using its end-to-end encryption technology for a while already.

How Did It Blow Up So Fast?

Many might assume it was all thanks to the company, Signal Foundation’s, stern stance on keeping one’s data and identity private while using their services.

But, it actually started becoming a mainstream replacement for WhatsApp when Elon Musk casually endorsed the Signal messenger app in one of his tweets.

It was right after Facebook came up with the new invasive policy for its messaging apps. So, naturally, people caught on to the hint right away.

Why is Signal Messenger Better than WhatsApp?

It’s actually in its name and that is Signal “Private” Messenger. This means:

Facebook Messenger and WhatsApp recently introduced disappearing messages and only follow end-to-end encryption. Other than that it is all in the open when someone uses these Facebook family apps.

What is the Company Getting out of It?

The Signal Foundation is nothing but a non-profit organization, surviving on donations, and way small in size when compared to a tech giant like Facebook.

However, the company is only interested in keeping their user’s data private and secure. For them, privacy is not an option but rather the only way to do things.

According to Signal, in 2016, the Eastern District of Virginia subpoenaed them to disclose information about their users. And all they could provide in return was:

As they do not record anything else. No information regarding contacts, groups, or messages is stored. So, one can expect them to always prioritize bettering their tool as a niche secure messenger app under all circumstances. Nothing more or less.

Considering all the protocols it follows, one thing is for certain, the app does not purposefully collect its user’s personal data. Privacy covered. It allows a user to put their password on the app so not just anyone can access it. Security checked.

However, even with all that, Signal users aren’t completely anonymous. To sign up on the Signal Messenger app, users require a phone number and that number then becomes their identifier.

Every App Has its Downsides

There is no application or software out there that is without its flaws. And, Signal is no exception. As users have complained about its Contact Joined Notifications that pop up whenever someone in a user’s contact list joins the app.

If a user only has a few contacts saved on their phone, then this could be a great way to know when a friend or acquaintance installs the app. But, some people have scores of contact numbers stored in their contact list. So, they may find these constant alerts a bit annoying.

Do not worry though, because an option is available for the users to disable these notifications on their Android phone or iPhone.