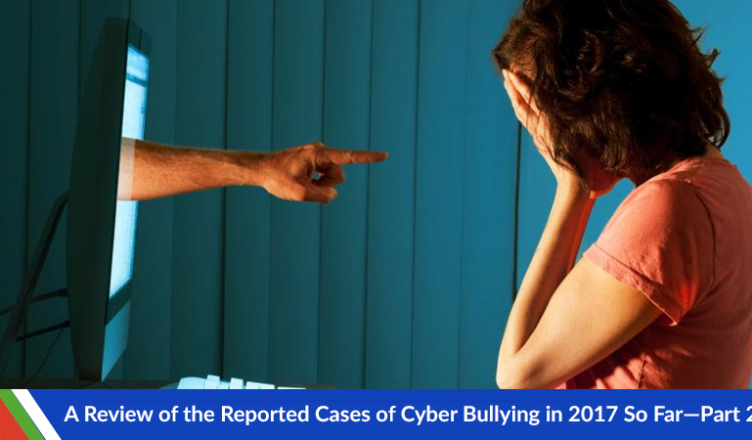 As promised, here’s part 2 of our blog on cyber bullying in 2017. Today, well focus more on how it can be prevented…

What We Can Do

Cyberbullying maybe an online entity where lots of anonymity may exist, but the truth of it is that the bullying party isn’t too smart most of the time. Messages, calls or anything of the sort can usually be tracked since a lot of bullies use their main accounts on any social media. But really, the problem isn’t what you’re going to do when you confront the bully, the problem is finding out who the bully is or wants, or why they exist in the first place.

If you’re a parent, it is your responsibility to be involved in their lives, no excuses. You should know who is in their social circle in real life, who their closest friends and you should regularly meet with them if need be. Chances are that the cyber bullying is being done by someone at their school or someone they actually know (your child may or may not know this).

Know this: There are high chances that your child will NOT come to you when they’re facing bullying. They will feel that they are capable enough to deal with this situation, when they are not. Because children nowadays are born into computers and the internet, their confidence and dependence on it is high. This means that they think they’re got the internet figured out enough to be able to deal with all of its nuances, etiquettes and behavior patterns.

XNSPY is a cellphone tracking app designed to track all apps, messages, calls and location of the target device you wish. XNSPY’s features, such as WhatsApp Spy will let you on their WhatsApp conversations and all media sent and received. If you child doesn’t use WhatsApp, fear not. MessengerSpy, the messaging app used for Facebook is also available on XNSPY.

Most Cyber bullies take to Facebook to let their frustration out on others. As Facebook is the most easy to use social website and the most accessible to everyone, especially their victims, it becomes an easy to job to see who is responsible for the bullying.

If you’re actually scared for your child’s safety, you can track their live location using XNSPY’s location tracker. You can check where they are at the moment and you can even set up e-barrier’s in certain locations or paths, if they cross this marked location you will get a notification.

You can check their gallery too to see if they have any screenshot of conversations of sensitive media. IF they have contact with someone you know is trouble, you can check if they have contact by the message or call log monitor. You can mark this person so whenever they contact your child or try to get to them, you will receive an automated message notifying that the device is being contacted.

All of this will be managed through the control panel that will be available on your own device or desktop.

How to Actively Combat Cyber Bullying and Bullying in General

The unfortunate situation of an actual suicide happening in a school, and the way most schools respond to the suicide is just sad. Schools will put up banners and posters that basically say “Don’t kill yourself, kid!”. People who actually knew the person is usually disgusted by anyone trying to capitalize on this situation. Schools and school boards consider it as a PR event more than a human taking their own life event.

The Netflix show 13 Reasons Why was a show that details how a girl was led to taking her own life after he peers, through cyber bullying, circulating rumors and a plethora of other reasons. Even though the show has its criticisms, the point was that the people around her let it happen, her parents never knew of the torment she was going through and a few more unfortunate events. She was made to take her own life.

It was only after her death that the people around her, including her bullies found out why and how she was made to take her own life.

Schools, especially American High schools with their zero tolerance policy give power to bullies. Sure they might suspend the bully or give them detention, but they really aren’t punishing the bullies. Especially where there is a difference or power between the bully and victim, schools will still punish both. This leads the victim of the bullying feeling frustrated and denied, they feel that the authorities have sided with the bully.

With online bullying, it isn’t hard to track who the bully is. Bullies should be pursued and talked to and penalized for their behavior. Through Facebook or any social media where they might be susceptible bullying.

The problem becomes when they’re being targeted by someone who is anonymous. If they get threats from someone they don’t even know. Anonymous bullies might go the next step by actually sending the victim harmful things through mail and sending the police to your house etc.

The best bet you have of protecting your child from anonymous bullies online is to track their browsing and see what forums and communities they frequent online. There is a high possibility that their bullies are on these boards. Your next step should be to have your child not go on these websites or communities for a while. Take power away from the bullies by just ignoring them online. They will lose interest over time.

Just talk to your child. They might see you as the same authority just as the school is, and you need to replace that fear and or frustration with a place refuge. Your child should never think they can’t talk to you because you too, just don’t understand. Make an effort to understand the online front, make an effort to take part in their world. They need to see you as a friend and someone who will help them out. Don’t try to make a confrontation or have them feel like it’s their fault, bullies and the authorities already make them feel like that. You child should never feel like they’re alone in situations like this because with online bullying, they feel might come to feel helpless at times too. If you come to them as a refuge or a place to vent for them, they will feel better. And you’ll be doing your job as a parent.

If you are feeling suicidal or depressed, please contact the Suicide prevention hotline, tell somebody, reach out. Reach out to your parents or your friends. If you’re being bullied, reach out to authorities. Even though we made it seem like everyone is against the victim, they truly aren’t and people are good by nature.