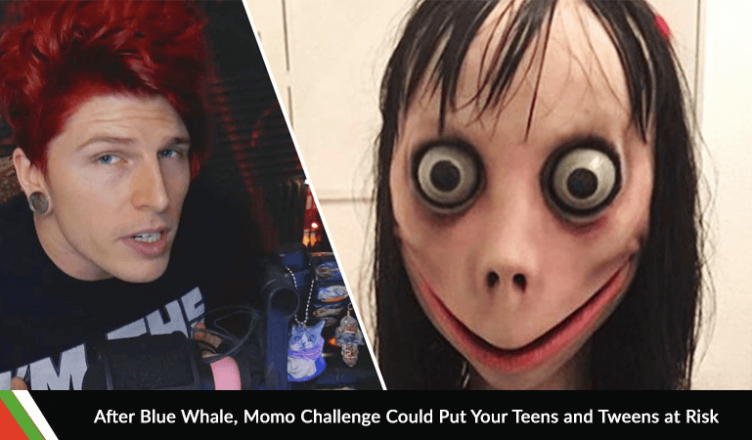 So, what parents should know about the Momo Challenge? It is an online challenge that kicked off on Facebook initially and now is spreading through the popular instant messaging app, WhatsApp. An avatar of a grotesque woman has become the trademark for the Momo Challenge. A Japanese artist, Midori Hayashi created the sculpture but has no affiliation with the game whatsoever. The artwork is known as Mother Bird.

The image is horrifying and bizarre at the same time. It features a distorted girl’s face with bulging eyes that appear like two momos, hence the name. The challenge uses the disturbing image to make teens harm themselves and even take their own lives.

The challenge started on Facebook. The players first receive an invitation on the social media platforms that also includes Snapchat and WhatsApp, to message on the ‘Momo’ account. They have to chat with an unknown person through an unknown number on WhatsApp. The numbers are associated with numbers in Columbia, Japan, and Mexico. Players receive disturbing images and instructions for the various tasks. These conversations also contain threats as to what will happen if the instructions are not carried out. The players are required to complete a series of risky and reckless tasks so that they can meet the ‘Momo’ character. The challenger has to perform a series of dangerous tasks and, they get to meet Momo upon task completion.

Concerns over the viral game are increasing as a 12-year-old died in Buenos Aires, Argentina after playing the said game via WhatsApp according to The Sun. The news report claims that criminals are using this game as bait to steal information and extort people on the internet. The game has become known after the young child was found dead in her backyard after allegedly talking online with Momo.

According to the police, the girl’s phone was hacked to find WhatsApp chats and footage. Now the police are trying to find the person with whom she exchanged those messages. The authorities believe that the girl wanted to upload the video to the social media as part of the Momo game stating the game as the reason for the suicide. Some people admitted receiving violent images during the night while interacting with Momo. They also received threats of appearing and getting cursed when the players were asleep. Some of the players claimed that they received terrifying phone calls where they could hear creepy noises and horrible screams on the other end.

As a result of this, authorities are issuing warnings to discourage people from adding the sinister figure on any of the social media platforms. Momo follows in the footsteps of the Blue Whale and the legend of the Slenderman. It is not the first game that targets young teens and results in tragic outcomes.

Slenderman started as a Photoshop challenge to see who could make the most images and become world famous. Later on, it came to be the main reason behind an attempted murder case. Two 12-year-olds lured their classmate into the woods and ended up stabbing her 19 times. The girls credited their action to Slenderman. Blue Whale was another sickening game that challenged youngsters to complete tasks for 50 days. The players were to kill themselves on the final day and this led to 130 deaths across Russia.

The police forces in Canada have also joined hands to control the situation and warn people about the disturbing online game. Lewis Smith from Canada Safety Council said that Momo Challenge resembles a great deal to Netflix hit Black Mirror’s episode. The organization works for safety education. The said episode depicted the dark side of technological innovations like the social media. According to him, the Momo Challenge seems inspired from the particular episode to some extent.

Parents need to stay informed about their child’s online activity. But monitoring is a tricky business. Smith says that there should be a fine line between becoming an observant or an overbearing parent. Children hide their activities if parents over-monitor. The best thing a parent can do is to be there for their children and let them know that they are always there if the children have something to talk about. So far, there is no information about who is behind the Momo Challenge. But this serves as another chilling reminder that one should always monitor their children and younger siblings and their personal computers and phones.

If need any help as to how to do that, Xnspy is always there to help you out with monitoring your young ones.