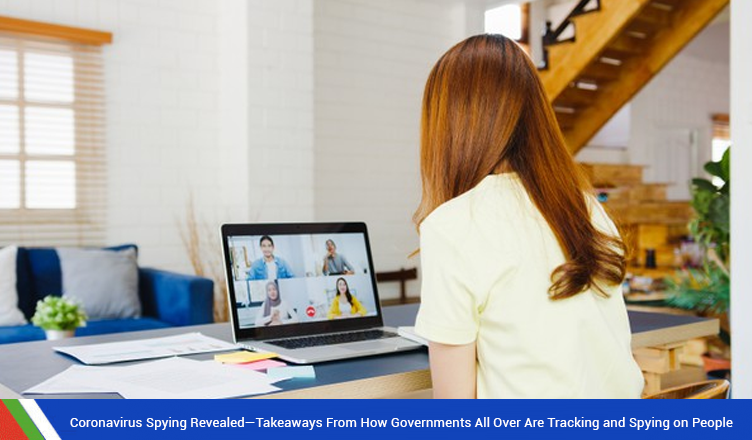 Apart from isolation, insecurity, and inefficiency against the COVID-19, another alarming emerging consequence has started to trouble the people across the globe. It is a massive increase in surveillance.

All over the world, governments are seeking different ways to minimize the spread of the virus—even it costs them to intrude on their people’s rights to privacy and personal space.

A new measure to keep the virus under control is Contact Tracing; a practice to track the whereabouts of the infected people, and then those whom they get in touch.

Contact tracing isn’t a new phenomenon. It was found effective during the outbreak of SARS and Ebola, along with other measures such as quarantining and social distancing. Even, it has proven effective in controlling the spread of COVID-19 in China as well.

Since the World Health Organization (WHO) recommended contact tracing to thwart the chances of the spread of the novel coronavirus, more and more countries overtly began to spy their people.

To combat the battle against the COVID-19, governments have found all the reasons to look into your smartphones and devices in the name of tracking the people to prevent further spread.

The invasiveness of these measures vary. Some countries have allowed their spies to tap the phones. Some go beyond the peeking with broadcasting the details while some are covertly tracking the data and the movements of their people with the help of Google.

All of the means of surveillance are being applied by the governments as weapons, even if it takes to compromise the individual’s safety and right to privacy.

According to the index in response to the outbreak of COVID-19, following digital privacy confinement has been recorded:

While talking to a news outlet, he alerted that the latest surveillance tech developments have already pushed the world into a permanent trap as many of the new measures avoided the public and political scrutiny.

Which Countries Are Spying On Their Citizens, and Why?

Let’s have a quick look at how countries have already joined the bandwagon and begun intervening with the people’s privacy to keep an eye. Here, they are:

The US is keeping an eye on the movements of people across the region via mobile phone data. The Trump government is reportedly gathering the data from the advertising industry to learn more about people’s congregation. The USA referred to it as a part of the massive increase in global surveillance.

For this, the White House approached Google, Facebook, and other tech companies about potentially using aggregated location data captured from Americans’ mobile phones for public health surveillance of the virus, and they agreed on.

Without taking the parliament into confidence, Israel’s Prime Minister Nitenyahoo has approved the geo-locating and geo-fencing of patients with the technology that, until now, was used only for counterterrorism.

Based on the national ID number and phone number, for the first time, the measure gave unprecedented authority to Israel’s internal security agency to track an individual’s phone to figure out the whereabouts of suspected carriers.

No country is looking more into citizens’ digital lives than China as part of its strategy devised against coronavirus. China has pushed its citizens into installing the app onto smartphones dictating whether they should be quarantined or allowed into subways, malls, and other public spaces.

China’s surveillance is not limited to phone tracking only. The government has already gone to the extent of facial recognition and monitoring certain sections of the population.

To contain COVID-19, Moscow is using the latest technology to keep track of residents. Like China, with a huge network of cameras, they plan to go for facial recognition coupled with digital passes on mobile phones.

South Korea has compromised over the people’s safety to the extent of revealing the identity and whereabouts of the suspected carrier or victim to their contacts and others. In the name of safety guidance texts, South Korea’s health alert texts endangered private lives.

A recent news report says that requests to reveal the phone insights of the citizens of Saudia Arabia living outside the country are increased many folds over the last three months. After the episode of the controversy of Khashoggi, citizens living inside and outside are quite concerned for their security as the stringent government is already infamous for spying, surveillance, and privacy invasion.

After China, Russia, Israel, and Saudi Arabia, Iran is another disreputable country for the strict surveillance of its citizens.

At the beginning of March, after the horrible spikes in the numbers of affectees and deaths due to coronavirus, citizens were pushed to download an app that would help in diagnosing the virus. Instead, the app started registering the devices and collecting contact and real-time location details. One can assume full-scale tracking functionality to be somewhere within its architecture.

Though later then the Google removed the app from the store, the government disowned the app that Iran would not cross the silver lines of privacy of her people.

Amid the deteriorating situation of Europe due to COVID-19, Austria proceeds with the use of phone data tracking. The government took the help of the telecom industry to share anonymized location data with the government.

In Italy, mobile network Vodafone provided an “aggregated and anonymous” heat map for a badly affected region. This showed how the wider population was moving around and helped the authorities make decisions around combating the virus.

When the news broke that the government is using geo-locations and geofencing to spy and trace the people, it created a quite havoc. Later, the government assured people that only the national database will be maintained to find the suspected carriers and victims.

Singapore continues its tracing and tracking with a mobile application. The government has asked people to download an app called TraceTogether that uses Bluetooth to monitor who else the user has been in contact with, and flag up if they’ve been near someone who might have the virus.

Taiwan is more into geofencing to enforce people to stay inside.

Another European country, Poland, has also come up with an app called Home Quarantine that asks for geotagging selfies. Non-compliance results in a visit by law enforcement agencies.

The UK hasn’t officially taken as such phone tracking or geo-fencing measures earlier, but a separate contact tracing app was already in the cards. The government approached UK telecoms and Google for cell phone location records to map COVID-19 spread. And, according to the Health Service Journal, the digital transformation arm of the NHS is working on a contact tracing app, and potentially identifying at-risk people.

People Reacts Across the Board Amid the Fears of Privacy Evasion

Even in times of catastrophe, the political elements are up with their agendas. Governments in the cover of Pandemic seems to have found a legal and an easy way out to spy on the activists, opponents, and certain defiant groups. On the other hand, privacy and peace activists are concerned about this as an intruding attack on the digital privacy and security of people. They blame that once it is imposed as a measure to fight COVID-19, it will prove permanent and problematic.

Using phone data, geofencing, app tracking, and digital compliance for revealing information to monitor the spread of the pandemic all over concerns citizens particularly, those living in Western democracies who are not used to being surveilled.

So why the digital media activists, policymakers, and experts are concerned with the growing trends of surveillance.

Contact tracing and recording proximity between people using Bluetooth, WiFi, or GPS data, could help efficiently notify people that they have earlier been in contact with someone now diagnosed with coronavirus and should self-isolate. It is apprehended that technology in the future facilitates the governments, spying agencies, advertisement industry, and terrorists to intrude on the confidentiality of the people.

Experts fear that this is the new surveillance norm as it isn’t as simple and protected as those parental control services monitoring children or work tracking apps keeping records of the performance of the employees’ productivity are. It is a huge threat as technology enables the collection of an extremely large amount of sensitive data.