Skip to content
XNSPY Official Blog > Tech > How the internet is a toxic place for young minds? 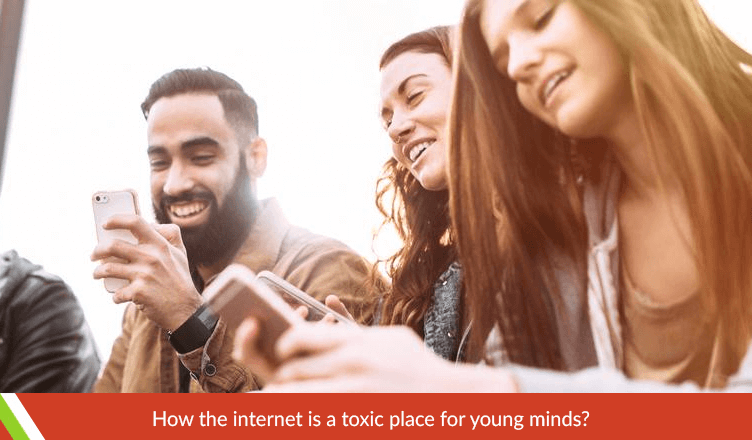 Children and adolescents are hooked to their phones and other digital devices. The internet has paved the way for so many possibilities. Social networking, streaming videos, gaming, online shopping, Google maps, and others are examples of how the internet has changed our lives. Without it, the world as we know today would cease to exist. There is no doubt that it has made our lives easier, but at what cost?

With cell phones, we carry the internet with us. The profusion of apps has influenced almost every area of our life, whether it’s work, dating, parenting, working out in the gym, or anything else. There is an app for everything.

For the sake of productivity, we choose the path of least resistance. This article by Judy Estrin points out that human beings shy away from pain and inconvenience. We are inclined to opt out for an easier way out. Not only does this make us lazy but is also demotivates us from putting in the effort to achieve greater potential. Instead of pushing ourselves, we choose what seems easy to us.

Complexities of life such as relationships, education, work-life involve hard work, consistency, and persistence. Our approach to life through the easy way is that it makes us indolent. Without realizing that each area of life takes time to cultivate and prosper, the internet culture has a way of forcing urgency our way. So, you may end up using apps like Tinder for dating, Facebook for interaction, Instagram for showing your lifestyle, Snapchat for conversations, and Twitter for expressing your opinion. We think these apps are a quick fix to our social lives. But this is not the case. We choose what is instant rather than what is slow. Because slow means painful which requires patience. This is what leads to growth.

Just look at how impatient we are when we don’t get an instant reply back, or when the internet is slow. We can’t handle it because we want it now. Social media gives us instant gratification, which affects performance. Instead of putting our reward at a later time, we want it now. To achieve their goals, young people are putting in less effort, because the reward for their hard work seems far away. The internet culture is making children and adolescents prone to fear of failure instead of trying to achieve their goal.

Instead of us being able to control an app, it controls our behavior. Apps like YouTube keep us engaged by showing us more videos with the help of its autoplay feature. Furthermore, the suggestions showed by the platform makes it difficult to break out of the cycle. This makes us compulsive users of apps such as YouTube.

Bullies feel that they are powerful and that they can bully anyone they want to. This is exacerbated in the case of online bullies. It is motivated by the fact that they can stay hidden and are anonymous to others. This toxic mindset is making our children engage in bullying and other abusive behavior online. This has a negative impact on our children’s well-being. Imagine the trauma that a child who faces bullying has to go through.

Our mobile phones are as much to blame as the internet when it comes to losing focus during a task. A single notification on our phones has the potential to distract us from the task at hand. Changing your focus from one task to another wastes time, because it can often get difficult to bring our attention back to what we were previously doing.

The internet has trapped us in our own bubbles. In some ways, it makes us ignorant and often oblivious to other people’s point of view. It leads us to believe that we are right. We are quick to anger and react when someone disagrees with us. In turn, we’ve become less tolerant of others. The internet is meant to bring us together but is pushing us apart from one another which is causing a toxic effect on young minds.

The filter bubble is a term created by Eli Pariser, which defines how the algorithms used in search engines only show users what they want to see. When a search query is made, the algorithm will show you the results according to your search history that best fits your criteria. In this way, the exposure that one may expect on the internet is diminished. Instead, you only see opinions and views similar to yours. Hence making people less tolerant and open to other’s ideas.

In some cases, it even shows that exposure to pornographic content at a young age can lead to problems at a later stage in a person’s life. When these kids grow up, it can be difficult for them to stay committed in a marriage. Hence, the ease with which pornographic content is readily available online can make children toxic in the future.

But, the internet is not all bad!

To say that the internet is bad and that one should not use it is absurd. The internet has revolutionized our lives. It has added value to our lives by making processes efficient and less time-consuming. It connects us to friends and family that are far away from us. The variety of resources available on the internet has enabled people to learn things at their own pace.

It is a platform shared by individuals where people exchange views, ideas, and concepts. It can make the world a better place by being able to revolutionize how we carry out businesses, how we educate our students, how we interact with others among other things.

To say that the internet is toxic is wrong. But, it can be, if you let it. This is why there is a need to regulate the internet usage, especially that of our children. There should be moderation. This is why we need to employ better practices when it comes to making the internet safer for everyone. We need to educate our children about digital etiquette and how to conduct themselves on online platforms.

Today’s adolescents are the people of the future in whose hands rests the fate of our world; therefore, we need to teach them about the toxic impacts of the internet, so that they don’t waste their time on it.

Side by side, we should also teach children how to positively use the internet for their own benefit. With this approach, we can hope that our children become better individuals than us.