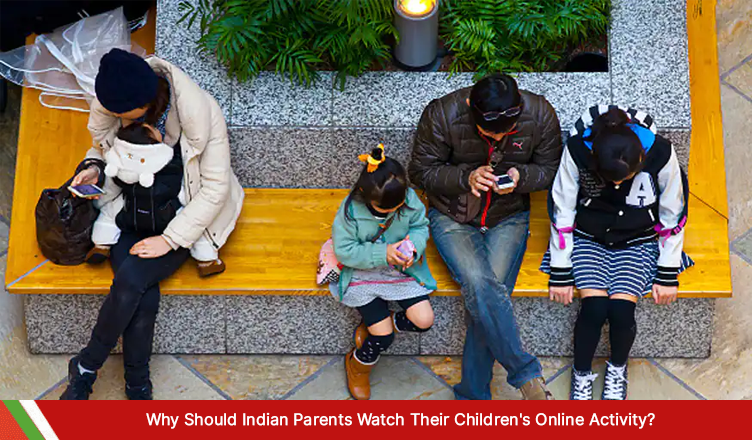 Since it is peak summer time in India, it means schools are off and, due to the massive heatwaves in the Indian peninsula this year, more kids will be spending time indoors. Due to minimum physical activity, no burden of homework, and less interaction with friends, it’s obvious that kids will become easily bored. Naturally, they will turn to their phones and spend hours and hours on them with no end in sight. And a majority of this time will be spent on the Internet.

Whether it be watching YouTube videos or making clips for TikTok, gaming online, or communicating with their friends, all of it is done with the help of the Internet. So clearly, it is a powerful resource. But as with everything else in life, spending too much time on the Internet can be dangerous. And Indian parents should be watchful of how their kids spend their time online.

How Does Internet Use Manifest Itself?

Nowadays, smartphones are pretty prevalent. Most emerging nations, including India, regularly use smartphones and social media. Nowadays, more than 50% of people have a smartphone. In the younger and better-educated age groups, it is commonplace. The study finds that the education disparity is most prominent in India, where those with higher levels of education are 41 percentage points more likely to own cell phones.

India also has access to 4G data plans for their mobile devices. Many Android smartphone producers have produced affordable handsets for the Indian market. All these factors contribute to the nation’s rising Internet usage.

Over 300 million individuals play mobile games in India, which is another country where gaming is highly popular. The COVID-19 outbreak has only helped the industry’s case as it has been expanding quickly for the past two years.

The annual growth rate (CAGR) for gaming increased to 38% in 2019–2020 from 37% in the prior fiscal year. It shows that during the past two years, the gaming industry in India has expanded more quickly than social networking.

Internet Addiction and its Associated Problems

As I mentioned earlier, smartphones have become quite common among the Indian youth. And due to the convenience they provide, Internet usage has skyrocketed. Because of it, “internet addiction” has emerged as a serious public health concern among young people.

Nearly half of smartphone users report experiencing some sort of digital distraction because the average individual spends over 6.5 hours a day on their phone. According to a study, teens are more prone to experiencing serious psychological issues. Problematic behaviors, physical symptoms, inability to focus, melancholy, and anger are a few examples of these problems.

Children’s sleep cycles are negatively impacted due to the excessive time spent online, which might impede their social and intellectual growth. Children who are Internet addicts are more prone to engaging in cyber sexual activity, cyberbullying, and sexual misbehavior.

Due to the widespread availability and low price of Internet access, even children from lower socioeconomic situations in India have been showing signs of addiction. Additionally, since there is limited study on Internet use and its negative effects among youth in developing countries, the consequences of Internet addiction seem minuscule.

Workplaces are struggling with a low productivity dilemma. It is common knowledge that workers abuse their electronic devices at work. Their productivity may get significantly hampered due to spending too much online.

Spending excessive amounts of time online using social media and messaging services like Facebook Messenger or WhatsApp to exchange messages is not only a significant distraction but also a security issue. Both of these are detrimental to business.

Furthermore, online gaming has presented new difficulties for parents to deal with, much like smartphone addiction. Ransomware is now flourishing there. The quantity of fake games with viruses has increased on online game stores like the Google Play Store and Steam. Games like Call of Duty and PUBG have conquered the Indian market because of their excellent playability, quick pace, and addictiveness.

The bulk of ransomware criminals lures gamers into downloading and opening malware-infected files by using accounts that have been stolen. On the other hand, malicious individuals break into players’ accounts and block their access.

Another dangerous aspect of spending too much time on the Internet is that children can come across viral videos depicting dangerous and inappropriate stunts and pranks. These “social experiments” are usually fake and extremely irresponsible because a majority of these channels’ following is kids aged 6 to 14. To rule YouTube and TikTok, controversy is king, and kids can get inspired to reenact similar stunts.

Plus, TikTok’s algorithm doesn’t have censorship or age restrictions, so questionable and borderline explicit videos pop up on the feed frequently. It is especially harmful to kids of young age who aren’t sexually mature enough to understand such content. Such content can give children the wrong impression of sex and make it hard for them to discern content made for views from reality.

How to Solve the Internet Issue?

Establish sound limits for both you and your children. Learn about the risks associated with excessive Internet usage and the dangers present online. Set periods during which they are permitted to go online. Whether it be for a group chat, research, watching educational videos on YouTube, or a brief gaming session. All of it is possible by setting healthy boundaries.

But if you’re struggling as a parent to control your kids’ online activities and cannot intervene through the traditional methods of setting up passwords, you can check the browsing history of your kids using remote monitoring apps.

These apps can assist in preventing excessive Internet use. Because a parent will always be monitoring their child’s online activities. To prevent them from visiting weird websites or clicking on links that contain malware, parents can employ monitoring software with browser tracking features.

These applications can aid in the fight against online bullying. To safeguard children from online abuse, cyberbullying, and stalking, these apps prove beneficial. Plus, since remote monitoring apps help parents in monitoring their child’s online activities, they will know exactly how often they visit a particular website and what kind of websites they have bookmarked in their browser.

Due to the dangers and challenges posed by excessive Internet use, it is no wonder than Indian parents feel a strong urge to watch their children’s online activity.