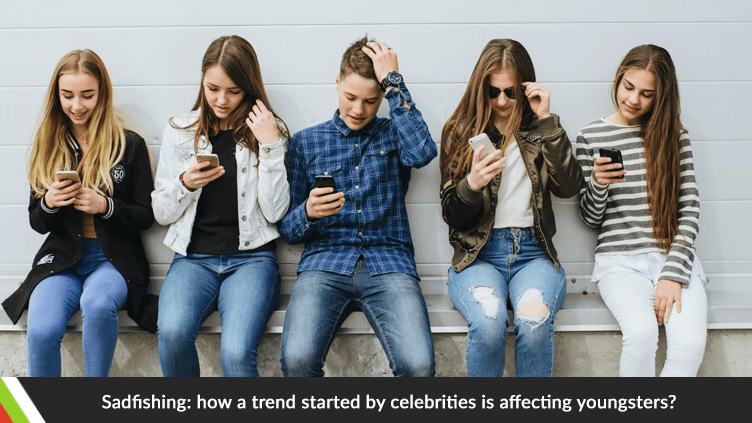 Now and then, there is a trend on social media that everyone seems to follow. In social media terms, the trend grows “viral.” Though there are often many trends that spread awareness, others are just bizarre. Sadfishing is the latest trend that has become common on social media.

Sadfishing is a term used to describe how someone uses a public platform to gain sympathy by posting about their insecurities, mental health problems, and other issues. Often, the entire truth of the matter remains obscure, and holding back some information may lead to more likes on posts. People may view it as a means to garner attention on social media platforms.

The term sadfishing came into use after a couple of celebrities posted about going through “dark times.” Celebrities such as Kendall Jenner was accused of sadfishing after she posted about her acne problem in a “raw and personal announcement.” People pointed out that the post on her account was for the promotion of a skincare brand.

Likewise, other celebrities were accused of sadfishing to garner likes and shares. One can never tell whether someone is being open about their experience or using sympathy as a means to further their agenda. Since celebrities are in the spotlight, it is often easy to distinguish when something is shared on Instagram or Facebook for promoting themselves or a brand. However, it is difficult to ascertain when an average person takes to social media platforms to share their experiences for the sake of attention or support.

How sadfishing is affecting young people?

Sadfishing affects children in very different ways. Today, every kid has access to a smartphone. It means that the majority of their interaction occurs via their phones, on messaging and social media applications. Sometimes a child or adolescent may share their feelings and problems with friends and followers. However, people who are aware of sadfishing may mistake this as a means to gain attention. Instead of getting support from peers, others may shame and bully the child for sharing his/her feelings. Hence, this causes more harm to a child’s mental well-being.

In the UK, there were reports of a child, who shared his mental health problem on Instagram was bullied at school. Hence, other children may avoid the child. If a kid experiences mental health problems in real life and shares it, their narrative is taken as sadfishing and not genuine. In this case, the child’s affliction goes unnoticed. Instead, the child faces a lack of support from peers.

When a child posts about their personal lives on social media platforms, it makes them prone to catfishing. Sexual predators may provide the sympathy that a child looks for. Kids seek support from people who sympathize with them, without knowing about the person’s motives. Hence, they fall a trap to it. Pedophiles and other fraudsters online can gain a child’s trust for their benefit. It does a lot of harm to a child’s well-being.

In the UK, a girl posted about her experiences with depression. A mutual friend of the girl responded by sharing his personal experiences, and the two started a relationship. When the boy asked her to share explicit images, the girl realized that the boy was much older than what he claimed. She soon ended the relationship.

Incidents like these are alarming, and parents need to step in. They need to provide the emotional support that their child seeks. Moreover, parents should educate children about maintain an online profile and the responsibility they have when it comes to online interactions. Although one can find support from an online community, it can also backfire.

A report by Digital Awareness UK (DAUK) identifies the latest online trends. The report says that “troubled teenagers are increasingly seeking comfort online, from strangers as well as friends.” While some find comfort online, others are being accused of sadfishing. The report also says that sadfishing is becoming a behavioral trend among youngsters. However, some people are genuine about their feelings on social media; but accusations of sadfishing make it difficult for them to open up about their feelings.

Sadfishing is making it hard for one to realize what is fake from real. When someone posts about their illness or other problems, it is either to get support or to gain attention. It is difficult to separate the two. However, one should try to avoid oversharing on social media platforms. As seen in the case of sadfishing, it can lead to worse problems.