Skip to content
XNSPY Official Blog > Cyberbullying > Understanding Bullying Behavior – What should you tell your children? 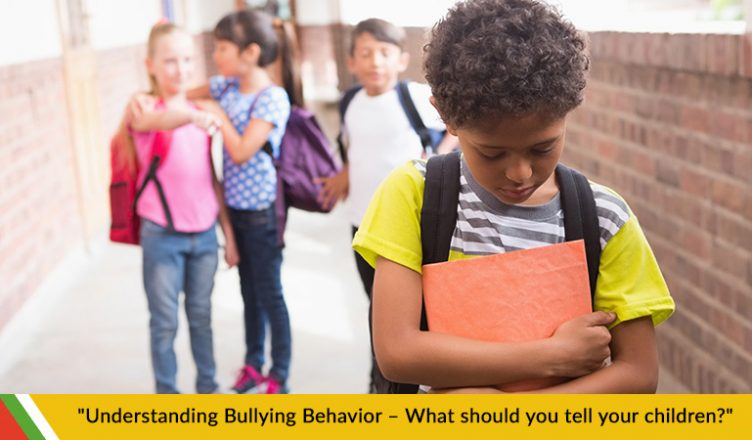 For bullies, bullying others solves their social problems. It is the easier way out after all. Rather than working things out, managing emotions, and solving problems, bullies find it easier to vent out by bullying others.

Bullying isn’t something new and has been around since ages. But, in this digital age, it looks like bullying has gotten a new face. Bullying is not something restricted to school halls and playground but has crept into homes. When bullying takes place on the internet, it is called cyberbullying.

Bullies are aggressive and they use various forms of aggression such as verbal abuse and violence. Bullies don’t learn problem-solving skills, rather they threaten other children. Bullies are negative and critical people.

They never learn to work out their problems and, instead, bully their classmates, threaten them or call them names. They don’t learn the art of cultivating friendships and getting along with people. Force and intimidation are their tools of choices and by the time they reach teen years, the bullying behavior gets embedded in their personality and becomes their natural response to anything or anyone that comes in their way. They use this behavior whenever they feel insecure, bored, scared or socially awkward even.

Aggression takes the form of emotional and physical abuse as well. You can see it in both adults and children. When children throw tantrums, they are actually asking for their way. And if that doesn’t happen, you have to face their behavior. As a parent, it is important to deal with issues at an early age or, these could manifest into much bigger problems.

The Depiction of a Bully:

Bullying does not stem from one source. One of the main sources is home. It is possible that there are parents, siblings or other family members who use intimidation or aggression to get their way; as a result, leading the bullies to act a certain way. When bullies grow up, this tendency could stay with them for their whole lives. But, some bullies do turn over a new leaf when they leave school.

Young child bullies become teenage bullies and then adult bullies who abuse their partners and children verbally, emotionally, and sometimes physically as well. A bully is willing to use verbal abuse, aggression and even violence get their way.

Listed below are some of the reasons:

Fundamentally, bullying is an aggressive act and people use it to exert control and power over someone. It is a way of forcing a dominant behavior and gaining a social status based on this behavior. Sometimes, friends and family are themselves involved in enforcing this kind of behavior.

Self-esteem issues could be the by-product of getting bullied and also why bullies act the way they do. To cover up how they really feel about themselves, bullies direct their focus on someone else. For them, bullying is a way to direct and deflect their insecurities and other issues on others.

Those who are victims of bullying are likely to turn into bullies themselves. This is due to the fact that their own self-esteem has diminished over time. And due to getting bullied, they are seeking means to boost this by bullying others. This becomes a vicious cycle in the long run.

They are Victims of Bullying Themselves:

Ditch the Label conducted a study revealing that bullies are more likely to have suffered from a traumatic or stressful incident in the past 5 years. The common examples include being a victim of bullying, disturbed home life or abuse. But at the same time, it is important to keep in mind that not everyone who goes through hard times in their lives bullies other people. Personal hardships cannot be an excuse for bullying but, could be one of the reasons as to why some people engage in negative and aggressive coping mechanisms.

Bullies also suffer from insecurity in relationships and to maintain friendships with others, it is possible that they might be forced to act and behave a certain way. Those who have loving and caring relationships are far less prone to bully others as they don’t have any reason to impress their peers and the need to exert social dominance.

What Should Parents Teach their Children?

With that being said and taught, you have set a standard in your household. It is wise that you start the culture of accountability from an early age and teach them that this kind of behavior will not be acceptable inside or outside the house.