Skip to content
XNSPY Official Blog > Parental Monitoring > What Should Parents Do About the Disturbing ‘Blue Whale Challenge’ Trend?—Part 2 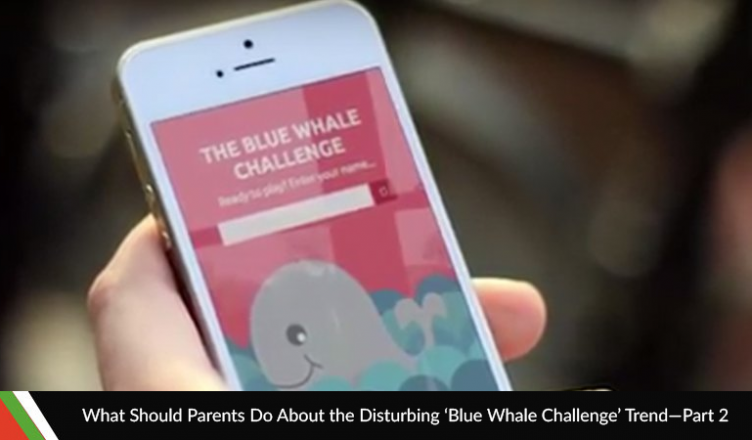 You’ve probably heard of this ‘Blue Whale Challenge’ through Facebook or other social media or you’ve probably seen a picture or two of bloody whale cut into someone’s arm. We wrote a post about it earlier this week.

The game allegedly follows a series of 50 steps that build on top of one another, where the ones taking part in the challenge have to perform a series of tasks that includes harming themselves in gruesome ways, staying up late and watching psychedelic videos, speaking to other members who are doing the task as well and then eventually, taking you own life.

The first reported suicide related to the Blue Whale Challenge was in 2015. Phillip Budeikin, creator of the challenge and former psychology student claims to have invented the challenge as a means of ‘cleansing’ the society by leading anyone who has ‘no value’ to it by suicide. In Russia in 2016, a moral panic was caused after a number of suicides were linked to the Blue Whale Challenge. Budeikin was arrested and pled guilty to ‘inciting at least 16 teenage girls to commit suicide’. Russia went on to work on suicide prevention legislation.

Actionable Steps for Parents to Take

The Blue Whale challenge, the curators of it and anyone involved will target anyone who is susceptible to online trends, or anyone suffering from depression or angst. There isn’t any confirmation that the curators of the Blue Whale Challenge force anyone to take part, any participants allegedly does it on their own free will, and that itself is the scary part.

We need to ask why our children are so easily susceptible to self-harm or even willing to take their own life and we need to take their matters and mental health a bit more seriously. Teens who will actively take part in harming themselves suffer from all forms of mental health, and if ignored, there might be a lot to pay for.

What do you do? How do you even know if your child is involved in this? Well the nature of the challenge makes it a little easier to know what it going on. The challenge starts off by telling the participant to carve ‘f57’ on their hands with a razor. It tells them to cut themselves along the veins on their arms. The figure ‘f40’ is told to be cut on their arms and then to carve out the shape of a blue whale on their arm.

Look out for any sign that might indicate self-harm. Cuts, bruises, unidentifiable marks. Check their hands and legs for any sign of marks. Check if they’re staying up late or up at 4:20am, which is a time mentioned on the ‘to do list’.

Don’t Let it Even Reach Self Harm

So keep an eye out even before it reaches that stage. Monitor their social media and phone contacts, who they’re talking to or who they’re listening to. Look at the type of movies they’re watching and what they take away from such movies. But as with any teen, they’ll tend to want to do things privately

What do you do when you child keeps you out of their life? What if they don’t ever talk to you? That is when you take initiative. Your child’s security and life is one the line. So dancing around the subject, half trying to talk to them will be trying to talk to a brick wall.

Get a Cellphone Tracker

A cellphone tracker is a good solution to any teen who’s very private about what they do. Anyone taking part in the Blue Whale Challenge, or even intending to, can be caught. A Cellphone tracking app such as XNSPY will let you in on a target device’s WhatsApp conversations, on their Facebook Messenger conversation, Snapchat, Instagram, Kik, all the fronts where the curators of the Blue Whale Challenge might be available for contact by anyone who’s looking to take part.

Besides all the usual social media, XNSPY covers traditional messaging and calls, since the ‘to do list’ has options where you can message the curators or other members. A unique feature of XNSPY is having a real time location tracker that will keep you updated on the current location of your child’s phone and obviously them. They’ll be sure to have their device nearby them since the curators demands proof of any action of the to-do list.

By having a way to look into your child’s phone and the trends they follow, you’ll be able to predict whether they’re going down the same rabbit hole. You’ll be able to intervene if it seems like they’re going to follow in the steps of the Blue Whale Challenge or any manner where they might harm themselves. You need to have a sixth sense about these sort of behaviors and fortunately you have XNSPY as this sixth sense.

The Blue Whale Challenge is a truly different and terrifying trend on the Internet that encourages self-harm and eventually suicide. Any teen suffering from depression and other severe mental health problems, who already have suicidal tendencies, will look to it as a ‘fun’ way or as an activity to do the thing they might have already intended to do.

As a parent, your child’s safety is your responsibility and any means necessary should be used to keep them safe. If you yourself are feeling suicidal or depressed, please contact the Suicide Prevention Line.