Each year we get to see more advanced mobile devices than ever before. Artificial intelligence and bezel-less smartphones are already sweeping users off their feet. But it’s not just the hardware that is beefing up, mobile operating systems are also going head-to-head with the premium smartphones. Google’s Android is a prime example.

The most popular mobile operating system (72.7% smartphones are running Android) is no longer a scrappy preteen that is duking it out in a simulated schoolyard. In fact, the newest release from Google, Android 11 is much safer than you think. It is faster, smarter, more powerful and sweeter than any of the previous Android OS versions. But, no matter how advanced an OS is, you can still always use hidden spy apps for Android to see what others are up to.

And to help you out, we have prepared a list of best Android spyware programs of 2021 that will empower you to keep an eye on Android users’ online activities.

• How We Rated These Top Android Spying Apps

• Verdict: So, Which One To Choose?

Getting yourself the best spy app for Android means looking into some specific features. Here’s what the best apps to spy on Android have to offer:

How We Rated These Top Android Spying Apps?

Our analysis of best android spying apps will enable you to make an informed decision when choosing an app to spy on an Android device as we have used the following criteria to rate these top 10 Android spy apps of 2021 :

We have taken a weighted average of the aforementioned criteria to give each app it’s overall rating.

At first place on the list of 10 best Android spy apps is Xnspy. It aims to give you remote control of the target device by fetching information from it such as call logs, texts, emails, chats taking place on WhatsApp, Facebook Messenger, Viber, Skype, and other popular platforms. It even gives you the control to track GPS location and social media activities of the user if they have an account on Tinder or Instagram. The sleuthing tool can also be used to record device surroundings and monitors specific activities once the user defines the keywords such as names, numbers, and locations. It’s because of these features, it’s one of the most popular android spying apps on the block.

The information collected through this Android spy software is easy to access from any internet ready device. Everything is uploaded to your personal Xnspy web account for you to review in your own time. All of this is done stealthily without your target ever knowing about it. Remember, you need one-time access to the device you wish to monitor in order to install the spy app. Once the app is installed, you are all set to lay your eyes on the target’s activities. 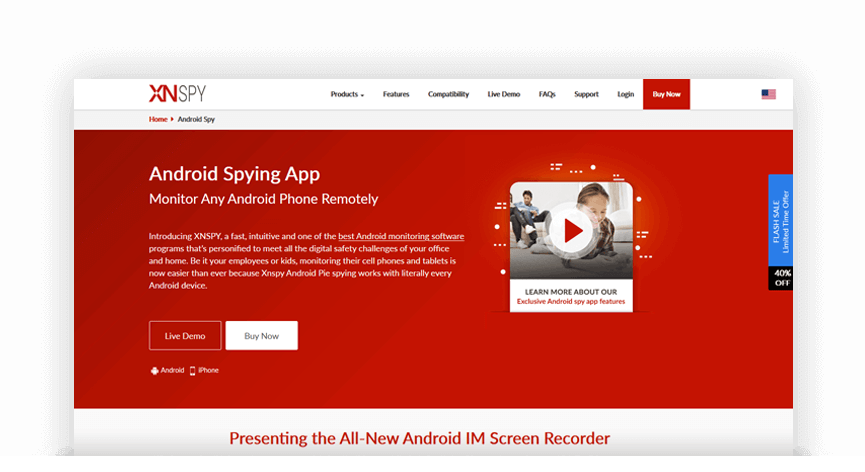 Xnspy is compatible with Android OS versions 4.0 to 11 It is one of the few top rated android spy apps that works on devices running the latest Android 11.0.

Despite being the best monitoring app for android, Xnspy hasn’t made this a reason to rip you off. It has classified its subscription packages into two categories: Basic Edition and Premium Edition. While the Basic plan has all the regular spying features, the Premium packages cater to the needs of power users with advanced functionalities. The Basic Edition can be availed for as low as $4.99 a month and Premium subscription can be enjoyed at $7.49 a month.

Next on the list of most popular tracking apps for Android is Spyzie. It lets you retrieve extensive details relating to the monitored device without blowing your cover. And it doesn’t even require you to root the device. The app can be used to track location, contacts, call logs, text messages, and much more. It also has the capability to monitor popular social media apps like Facebook, Instagram, Snapchat, etc.

Advanced features such as keylogger, screen capture, call recording, ambient recording and others make it a valuable solution for parents who want to monitor their children’s itsy-bitsy details of their cell phone use. The best part is this efficient Android monitoring software of 2021 stays 100 percent invisible on the target device as the app icon disappears once you install it on the desired device.

That said, you are required to access the target device manually in order to set up the program. 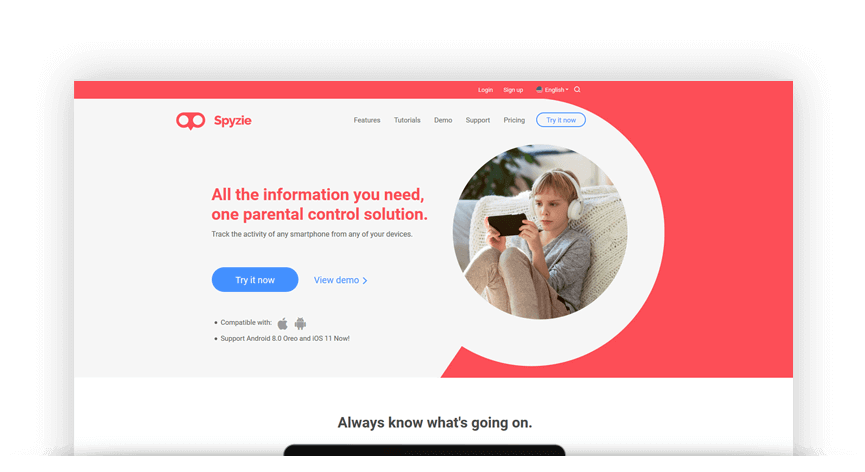 On this frontier, it seems like that Spyzie is truly enchasing its status of one of the best phone spy app for android around. It has two subscription plans for users: Ultimate Edition and Premium Edition. The Ultimate Edition offers limited features, so the yearly license will cost you $89.88 a month. Whereas the Premium Edition lets you up your spy game with a huge cache of features. As a result, the price is also steep, i.e. $99.99 for a year’s license.

Flexispy is another useful spying tool and ranks as third best android espionage app. The program lets you snoop on popular Android messaging apps like Facebook Messenger, Google Hangouts, WhatsApp, Tinder, and more. View phone contacts, internet browsing history, track app activity, snap images with the remote camera feature and see everything that is being typed on the monitored device.

The spy app has a remarkable ambient recording function that lets you eavesdrop on behind-the-wall conversations. Also, it allows you to track the location of the monitored device by pinpointing the location on a map. You can even record VOIP calls with the stealth spy app and monitor specific activities by creating custom alerts.

Flexispy works with mobile devices only. It’s a huge turn off for people who are looking for undetectable android spy apps that supports all the devices, including desktop monitoring. That said, Flexispy is compatible with all the devices that are running Android OS 4.0.3 to 7.1.1. However, you need to root the device to enjoy all the Flexispy features.

You have to choose between the Premium and Extreme packages in order to get a valid license to use this app. The 12-month Premium package costs about $149 a month whereas the 12-month Extreme plan for demanding users will cost you $349 a month.

The high-end mobile spy app to track Android phone can aid you to safeguard your children and business interests. It lets you track browsing history, saved videos and photos. Furthermore, like other hidden android spying apps, you can record phone calls and get the location of the device with it the GPS feature is turned off. In case of an issue, you can seek instant help by connecting with the live chat support staff of this great Android monitoring software of 2021.

MobiStealth is tamper proof. This ensures the app keeps running in the background at all times. Getting the app installed on the device is relatively easy. Once installed, the app begins to collect information without ado. You can spy on calls, text messages, access calendar entries, remotely control the device as well as installed apps.

MobiStealth’s official website doesn’t describe which Android operating systems this software supports. As a result, it’s hard to say which Android devices you can tap with this tool. However, the company did mention on its website that they are compatible with all carriers. This includes 3, AT&T, Orange, Sprint, T-Mobile, Virgin Mobile, Vodafone, and Verizon.

Another worthy contender on the list of 10 best apps to monitor Android is Spyera. It is designed to offer a variety of cell phone monitoring features. Some characteristics of this best spyware for android include listening to the device surroundings, location tracking, eavesdropping on phone conversations undetectably, accessing text messages, and emails, chats, MMS and contact details.

Spyera offers all the features one would expect from the latest breed of hidden android spy apps. In fact, you can find some additional and advanced features. For instance, the app has the capability to tap into someone’s BBM messages. Setting up the app also doesn’t take too long, but it requires rooting. 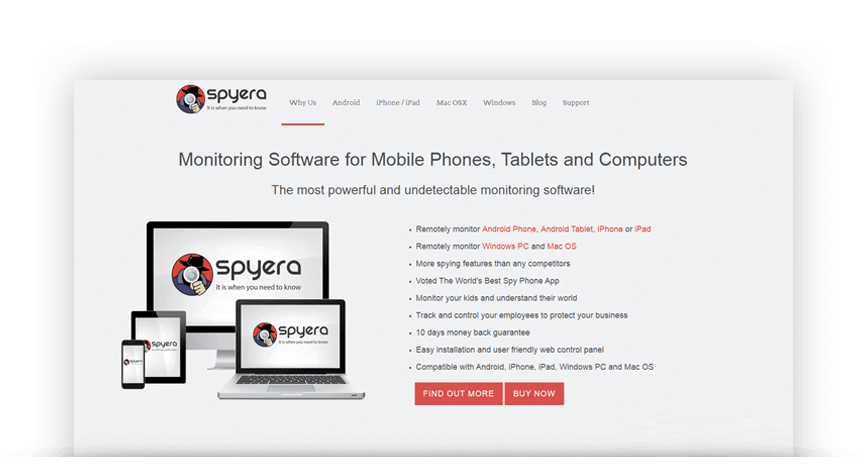 Spyera is compatible with all Android operating systems including 7.1.1 version. But it has yet to release an update to support latest Android devices like Samsung Galaxy S21 and Note 21.

The yearly license fee for a smartphone is $389. However, if you are looking to tap into someone’s Android tablet, then the charges will be slightly less, $249 for 12 months.

Verdict: So, Which One To Choose?

With technology advancement, it is a haven for apps to monitor Android phones and for that reason, we get to see a fairly big list for best android spying apps. However, Xnspy’s extensive and expansive features make this a no brainer. The app may not have the biggest list of features, but it does have all the necessary ones, including many exclusives (like the Call Time Activity Punch Card, actuarial reports for top callers and top browsed sites, etc.), which could save you hours of your daily time—that time which you otherwise would be spending sifting through every phone log, one by one. Xnspy is easy to use, delivers consistent performance, and offers an extensive array of features with relatively fewer limitations.

Does the name sound familiar? Of course, it does. It rhymes with the best spy app for android on our list, i.e. Xnspy. It’s common for an app as popular as Xnspy to have copycats. But be careful not to take your cards out for "XpSpy" because there’s no guarantee what else could you lose apart from your money when you download some unreliable spyware on their phone. The target phone user could get into many different types of troubles. Their personal information could be extracted from their devices by this shady app and then sold off the internet or used for extortion. So beware and don’t try "XpSpy" when you can get Xnspy with the advanced features, a minimal price, and 24/7 customer support.

There’s not just a single copycat who’s trying to profit from the name of the best app to monitor Android out there. XySpy is just another flawed app that you shouldn’t try at all. But we had to tell because it's easy getting scammed when you miss out on tiny details, like the difference of only one letter between the original and fake app's names.