Skip to content
XNSPY Official Blog > Business & Cyber Security - New > Is Your Job in Danger of Being Automated? 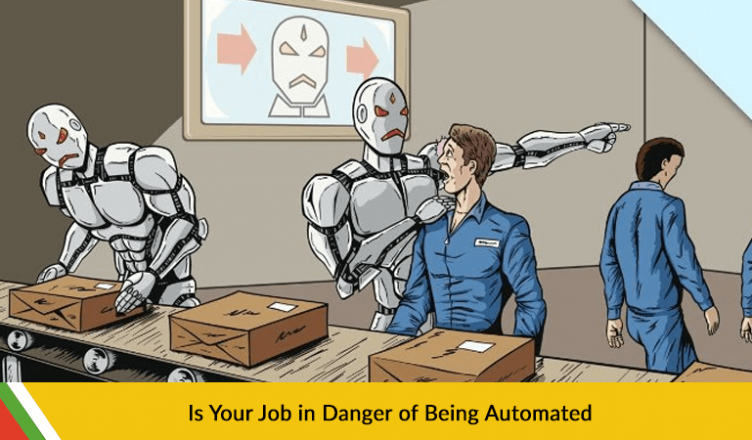 In today’s ultra-fast day and age, things are moving a lot faster than you previously thought since many scientists agree that we are entering the fourth industrial revolution. A revolution that could quite possibly take over your job with a better, more precise machine that provides 100% of the desired results. A future that offers perfection and precision for a cheaper price, but is the cheaper price worth the potential loss of millions of jobs?

Leading companies such as Google, Facebook and Uber are trying to figure out if machines could possibly take over your job.

A collective effort from researchers from the University of Oxford’s Future of Humanity Institue, AI Impacts and the Machine Intelligence  Research Institute have concluded analysis from a survey of 352 scientists determining how long it would take for a machine to take over various jobs.

Researchers predict there is a 50% chance that machines will be capable of taking over all human jobs in 120 years.” So there isn’t any sort of emergency as of yet and many of us can safely continue our jobs,

“One of the biggest surprises was the overall lateness of the predictions”, says Grace. “I expected the amazing progress in machine learning in recent years, plus the fact that we were only talking to machine learning researchers, to make the estimates earlier”, one of the researchers said.

So what do we look forward to in the near future? How real is unemployment by AI and where has it already taken over?

A suggestion by the survey conducted by the researches says that Artificial Intelligence will be folding our clean (or dirty, depends how you use it) by 2021, which is less than four years away. So do Laundromats around the globe have to shut down? Do people have to invest in the Foldy™? Not really. Machines that fold clothes have already existed for a while now, developed by the University of California, Berkeley, a machine that folds (neatly) towels, jeans and t-shirts.

Early in development back in 2010, the machine took 19 minutes to pick up, look at and fold a single towel. Some people would already be done with a pile by then.  But then two years later, the artificial intelligence grew smart enough to fold a pair of jeans in five minutes and a t-shirt in six minutes.  What could really be the selling point of something like Foldy™, is the ability of the AI to pair socks. We truly live in the future.

But despite this arguably futuristic sock talent, the AI and something like this could take a lot more time than previously anticipated.

“I am a bit skeptical of some of the timelines given for tasks that involve physical manipulation, says Jeremy Wyatt, professor of robotics and artificial intelligence at the University of Birmingham. “It is one thing doing it in the lab, and quite another having a robot that can do a job reliably in the real world better than a human.”

Indeed, the process behind a biological action or thought may seem seamless, but having to replicate that with a machine in the real world, having it determine what to change, how to change it in the constantly changing environment of the real world maybe too overwhelming for a machine. But jobs that do not require anything to be physically changed maybe easier for the Artificial Intelligence to learn.

What About Self Driving Cars? Aren’t they Artificial Intelligence?

As for automated driving and deliveries, the likes of which Google uses for its self driving cars and something Amazon Is interested in, researchers comment how the automated driving technology is much like the internet was in the 1990’s. An early developing age, even though it might work! And we all know how fast the internet evolved so the near future could very well see autonomous driving and deliveries completely take over.  Truck drivers might be taken over completely taken over by 2027 and retail jobs by 2031. The job of an assistant on the floor to help you find something or tell you where something is requiring complex physical and communication skills, something that AI might not be taking control of.

Speaking further of shopping and retail, more and more people take their business online, the entire system of ordering, transactions and delivery is automated.

“Look at how many transactions we now do online that are largely automated – it is a significant proportion. And they are already using a reasonable amount of AI.”  One of the researchers says.

Where does AI Struggle?

Perhaps the hardest job for Artificial Intelligence is the job is in reality the hardest job for humans.  Skills and tasks that take years of training and experience to perfect and hone are the hardest jobs for robots to learn as these jobs require intuitive decision making in complex environments.  Biological thinking and abstract thought and its patterns is something robots struggle with.  Medical procedures such as surgery are a mostly mechanical process that can be taken over by machines by 2050. And around the same time machines could be churning out mathematic researches in academic journals and selling New York Times best-selling novels.

Google is already training its AI to write romantic novels and news articles, as a means to help it write more creatively. This Ai is intended to act as a complement to the human, rather than as a replacement.  The AI robot named Benjamin writes sci-fi scripts which sometimes is gibberish.  Automated Insights is a result of algorithms that create millions of customized articles for companies like Reuters and Associated Press.  “Automated journalism is creating content that would not have existed before, but humans still need to add context to those stories.” says Adam Smith, chief operating officer of Automated Insights.  Information is plugged according to a template, created with the help of a database and then context and information is added by humans.  Anything complex and self writing with twists and dramatics is decades away.