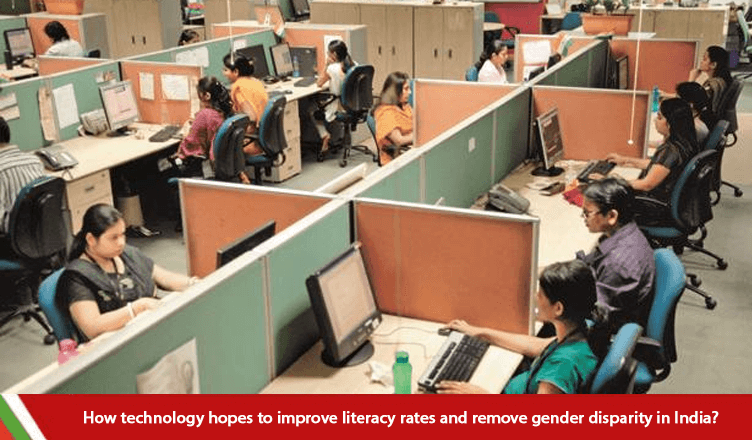 A lot of effort by the government, NGOs, and the international community has undergone to promote education. But still, a large population of women in India is illiterate. Several factors account for this, poverty is the principal reason why parents don’t send daughters to school.

Furthermore, the enrollment rate of girls in school is less. This is because parents don’t invest in a girl’s education as they would in a boy’s. Other than this, schools are often ill-equipped to provide facilities to their students. Often schools are situated far away from homes, traveling long distances is a hurdle for school-going children.

What does a low literacy rate lead to?

There are many problems associated with low literacy rate. For an individual who does not complete formal education, there are fewer job opportunities. Moreover, it leads to lower income. Hence, it can lead to a poor financial situation. If a woman does not receive education at the right time, chances are that it could lead to illiteracy in the next generation as well. Since, less emphasis is given on education, especially education for a woman, the same cycle is likely to repeat. On a broader prospect, lack of literate individuals creates a gap between demand and supply of jobs requiring skilled individuals. On a national level, it leads to lower economic growth.

How has this improved the situation, if it has?

Technology has the potential to provide access to educational resources, in remote areas, through digital classrooms and remote learning. Its potential remains untapped. Since India faces a shortage of teachers, especially female teachers, technology can help bridge this gap. Teachers can reach students through means of modern communication systems. Remote areas also have a shortage of educational resources. Computers and laptops can provide students access to the never-ending stream of education resources found online. A lot of the resources online are free.

Basic education is the right of everyone. Much of the rural and urban slum population does not have access to education. Even those students who have gained formal education lack in skills based on different fields. In this case, too, technology can help students become proficient in skills that are required in the current market. It is found that English language skills can improve job prospects. Moreover, basic computer programs and programming language skills are necessary for the thriving IT field of India. As the demand for these skills increases, India needs to have a comprehensive strategy to reach this goal.

There is a gap that exists between education and access to technology. This is where tech industries can provide benefit to the populace. One such example is that of Tata Consultancy Services that incorporated modern technology into providing education to adults in rural areas.

Tata, the country’s industrial mogul, has introduced a Computer-Based Functional Literacy (CBFL) program that aims to provide access to educational resources in the remotest of areas. The program led by Tata Consultancy Service (TCS) boasts to have “accelerated adult literacy.” The program teaches basic arithmetic concepts in 50 hours, which is faster than traditional classroom learning. The lessons use graphics and repeating sound patterns to improve cognition, retention, and recall of words. The program is composed of reading, writing, and arithmetic. This is a fast-paced learning program that targets adults.

About 81% of the people who entered the program were women. According to TCS, the program empowers women by allowing them to juggle household responsibilities and literary classes, side by side.

Apart from this, Google recently released a language-learning app. The app, called Bolo, encourages reading in people in the English and Hindi languages. The app has about 50 stories in Hindi and 40 stories in English. It provides feedback whenever a child makes a mistake in reading. Techcrunch reported that the app has been tested in villages in Uttar Pradesh. According to the article, the app improved reading among children.

But it’s not just technology that is improving literacy rates, Bollywood has played its part too. BBC published an article that narrates the story of women with limited knowledge of the Hindi language being able to read signs by watching TV. Subtitles on various programs, including TV shows, movies, and music, has taught women how to read. It has helped these women learn new words, improve their grammar of the Hindi language, and recognize words. PlanetRead started the Same Language Subtitles (SLS) initiative to promote reading and learning languages. It is a not-for-profit registered in the USA and India. The organization aims to “transition over 300 million people in India, from a state of early-reading to functional and fluent reading ability.” However, SLS is not without its problems. For weak readers, the text moves too fast for them to read, so they simply ignore it.

But this example goes to show how technology can be used in innovative ways to tackle the illiteracy problem that the country faces. These efforts by the tech community are commendable. However, such initiatives are often concentrated in a particular region. Widespread adoption of technology in rural and urban areas need to be implemented. There is no doubt that technology will play a huge part in improving the literacy rate in India. The IT industry, NGOs and the government need to collaborate so that their efforts come to fruition.