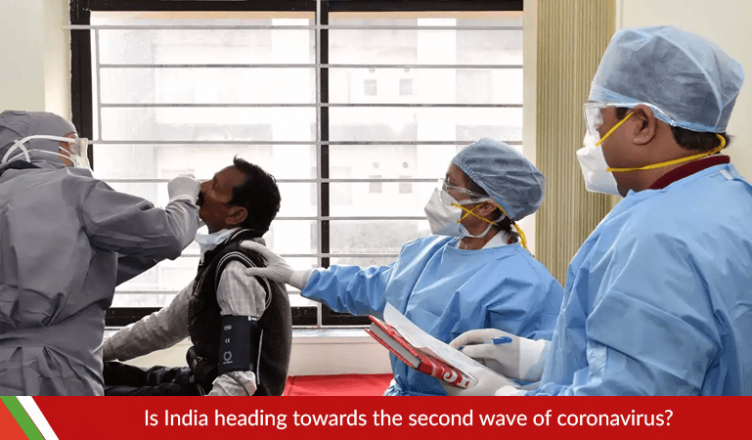 The whole world is currently facing the impact of the coronavirus. It has disrupted the lives of many around the globe. Even though attempts are being made to conquer the virus by inventing vaccines, many countries are going towards the second wave of the deadly virus.

India has been amongst the top countries which have been severely affected by the coronavirus. Even though the number of cases and related death tolls have been declining in India for a couple of weeks, health experts predict the possibility of a second wave of infections in the winter season.

What is the meaning of a second wave?

When the countries saw that the number of cases of infection is declining, they started lifting the travel ban and lockdown restrictions. However, the recent influx of new cases, especially in the European countries, has again forced the nations to go back into lockdown to prevent the spread of the virus. That is why the second wave of a virus usually refers to a revival of the previous infection, even though it seemed to have decreased over time. It, however, begins to rise again, resulting in a second wave of infections. India has previously only experienced the virus during the summer. Therefore, we are not prepared about how it is going to affect people in the winter season.

How is the second wave affecting the European countries?

The first wave of the coronavirus began in March. Italy was one of the earliest hubs of the virus, along with Spain, Germany, and the United Kingdom. These were the first few countries to impose a lockdown. Today, the United States of America is leading the charts, with India being the second highest affected country with around 7.5 million infected people. The rapid increase of cases has resulted in France declaring a state of emergency by imposing a night-time curfew in Paris and eight other regions. Germany has banned social gatherings at concerts, public festivals for the rest of the year. New isolation rules have been announced such as a compulsory 14-day quarantine. People who get seen without a mask get charged a huge fine. Spain has also imposed a partial lockdown to avoid the serious effects of the second wave of coronavirus.

Are there chances of the second wave being worse than the first?

According to the reports, the second wave is mostly worse than the first. That is because the number of infections is now higher across many countries. In India, over 90,000 cases of coronavirus get reported every day. Delhi is one of the most affected cities. It has experienced a consistent number of infected people, and the hospitalization rates are not seeming to decline.

What is the possibility of India going into a second wave?

As the virus is still present in the community, health experts believe that the chances of India suffering from a second wave of the virus seem very high. India still has a long way to go in completely eradicating the virus because more than half of India’s population is still susceptible to coronavirus infections. As the festival seasons approach, the citizens need to make sure that they follow the SOP’s and be mindful when socializing. If people are not careful, then all the previous efforts of stabilizing the spread of the virus would go to waste.

What steps must India take to prevent the onset of the second wave?

India needs to plan its future steps carefully to prevent the second wave of coronavirus from affecting its huge at-risk population.

At the family level, there should be a high emphasis on protecting the vulnerable; individuals over 60, people with underlying health conditions, and children with low immunity. Families must take responsibility in helping to quarantine the elderly and the vulnerable. That means keeping them away from the public, minimizing interaction with them, and promoting physical distancing.

At the community level, the lockdown should be lifted in such a way that the livelihood of the poor people does not get affected. However, the government would have to keep a close eye on the growth of the infection when the lockdown gets lifted. Education on personal hygiene measures must be reinforced. It includes washing the hands for at least 20 seconds, sanitizing, and avoiding touching the eyes, ears, and nose.

Hospitals also need to take steps to reduce the transmission of the virus. The patients coming in should first get tested before entering the hospital, and hospital staff must have sufficient PPE gear. To conquer the virus, the government and the citizens must work together to get the best possible results. With a large population, a one-sided effort cannot help to reduce the spread of the virus. It is a tough time for many, but with consistent efforts, the nation can hope for a better 2021.