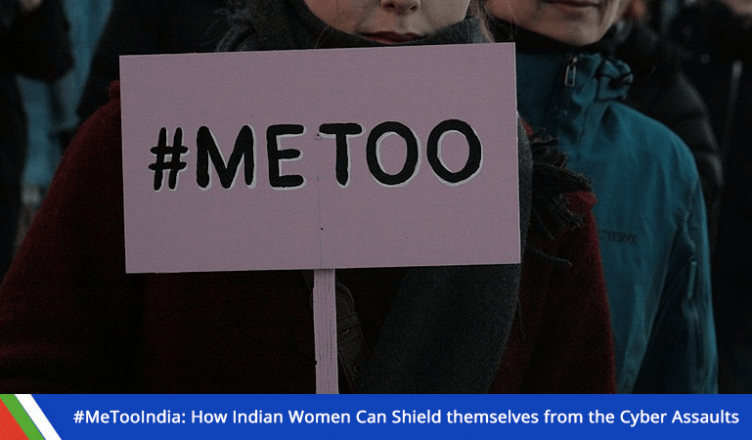 #MeToo is witnessing its Indian reckoning. Women are standing up against the brutality of men who heaped misery on the most neglected segment of the country. Be it work life or private life, the pressure is building on the perpetrators of this violent crime to either give in or get ready to face the wrath of women, publically.

When it comes to India, the lava had been building inside for years. Finally, the women have come out and accused ministers, famous TV directors and producers, bosses, and co-workers for abusing and harassing them either online or at the workplace.

Since India is the world’s second largest internet-using population, the next threat is from the growing online presence of vultures. This blog post focuses on how women in India can keep themselves safe from online harassment and assaults.

With the growing number of internet users, the crime rate is only surging in the country. The number of cybercrime incidents involving women and children is at an all-time high. As per a report by the Indian Computer Emergency Response Team (CERT-In), more than 53,000 cybersecurity incidents were reported in 2017 alone. The report cited a number of online crimes that the culprits used to intimidate the online users.

Another alarming stat is that there is a cybercrime every 10 minutes in the National Capital Region. From 2014 to 2018, the number of sexual harassment cases in the Indian workplaces has been increased by a whopping 54%. This is as per the government data presented in the Lok Sabha.

Although the government has introduced laws to tight the online crimes and harassment incidents against women, they seem to have no effect on this ever-increasing number of crimes against women. To help women counter any such misery online in-private or at work, we are presenting some useful tips to you.

Awareness is your first line of defense against online threats. It means that you must be cognizant of the threats that you could face online. It is important to be aware of the ways cyber criminals could inflict damage on you. If you are a single parent or a working woman, this could help you protect your kids and harassment at the workplace to avoid the horrors of the internet. You must plan for a safety net that is closely knit to curtail the chances of online violation by the strangers. Staying informed and being a learned online user would be an effective way to repel potential threats coming your way.

This is especially for the teen girls out there, and if you are a parent, you need to keep an eye on this one. Cyber grooming is one of the banes of the internet for the parents. In this form of online crime, the culprit tries to establish an emotional and intimate relationship with the girl (usually a preteen or an early teen). The user will first instill confidence and trust in the victim and later exploit it for sexual favors.

The perpetrators are usually pedophiles that use social networking sites and chat rooms for communicating with children. Children feel themselves as “safe” because of the anonymous nature of communication on the internet, but they are unaware of the person they are talking to and that’s where the danger lies. So look out for your girl’s social media sites and the people they make friends with.

However, the ideal way to limit this crime would be to restrict your girl’s online interaction to the immediate family members or the close acquaintances.

We all can fall victim to this one easily. Suspicious links are sometimes hard to decipher because they imitate the original pages so well that we click on them considering them as the genuine one. However, there is a rule-of-thumb for this problem. The rule would be to just never open or click on any link or file sent to your e-mail, messenger, and social media forums by a stranger or unknown person.

It takes a moment for things to go out of hand on the social media. So the best thing would be to keep your posts private. Not doing so would make your personal pictures vulnerable to the stalkers, who can even download and misuse them without your knowledge.

Social media platforms have also their set of private protocols that you can use to avoid online troubles. So if you feel uncomfortable from any stranger or someone from your friend list then report them right away. You can also block them and remove them from your friend list.

In case you use any other device, other than your laptop or cell phone, to access your social media accounts, bank accounts, or any other account that keeps your private information, do not forget to use incognito mode in the browser window. After you are done using, log out your accounts. Also, use a strong password with a mix of upper or lower case alphabets. Adding a number or special character will make it stronger.

In the end, remember to wipe off your device if you are selling your phone or laptop or giving it for repair.