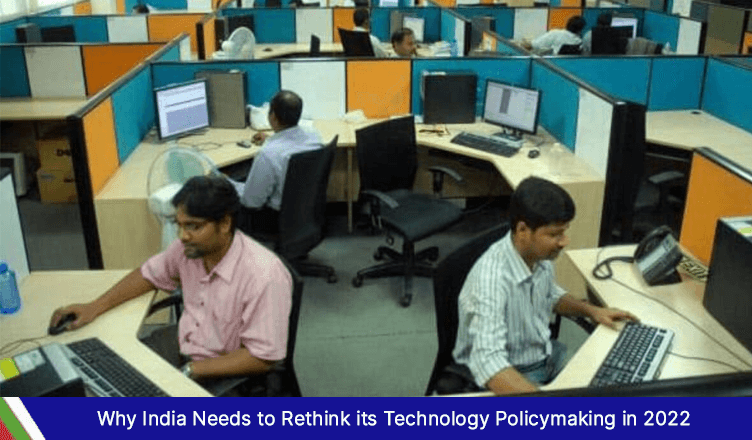 From IT and ITeS to BPO and KPO, to Biotech and Pharma, to e-commerce and Fintech, there has been a renaissance of Indian interest in technology over the last few years. India has the second biggest workforce behind China, and Information Technology is its biggest export. Major Western countries are lining up for the IT services offered by Indian businesses due to how cheap they are.

It is how we got from India’s “Original Software Exporter” title to the current “Digital India” tagline. However, even though there has been remarkable progress in terms of growth and overall involvement in the global IT ecosystem some long-standing issues still exist. These issues have stemmed from poor policy decisions related to technology by government bodies in the past. There is an urgent need for India to start building a future-ready vision for its tech policies. Here are a couple of pointers as to what these may be.

Current policymaking in India is inadequate to help citizens solve their issues. Indian citizens have to go through bureaucratic barriers to file a complaint even. It is all due to ding ding ding, you guessed it, corruption.

The current state of policy designing is so rudimentary and ancient that most policies create more issues instead of solving them. Worst of all, an ordinary citizen cannot file complaints without having contacts or knowing someone who works in the government sector.

Most policies get developed from scratch, so they only get considered when the need arises. Moreover, Indian policies do not have any pretested outcomes and success indicators. Thus, most policies fail before being implemented correctly or because they do not produce desired results.

India has to improve its policymaking standards as technology advances and Google, Apple, and Facebook turn their eyes towards the subcontinent giant. The current landlord mentality won’t work when new technology gets obsolete before you can even say technology. The tech sector suffers the most from delays and obstructions faced during the law-creating stage. So a delayed policy is as bad as an anti-tech policy.

This befuddled way of implementing policies will drive all the big players in tech out of India, thus severely hurting its economy and reputation as the next IT hub.

India’s tech industry faces another major challenge. Most Indian lawmakers are unqualified to handle or understand the fundamentals of how tech works. They cannot wrap their brains around how fast technology has evolved over the past decade alone. So it is inconceivable how someone who has no idea how tech works can have a say on how tech laws should get developed.

India must urgently move away from this type of stifled policymaking. The need to make procedures more inclusive and participatory is critical.

Technology, as we know it today continues to evolve throughout time. The government and other relevant entities must recognize that technology policies necessitate forward-thinking. A multi-stakeholder ecosystem must get created so that research and development get translated into commercial applications for each of these technologies. It can only be accomplished by taking a proactive approach rather than depending simply on a needs-based strategy.

What changes should India make to improve tech policies?

Evidence is crucial when working with technology, and so should be the policies around it. It will make tech policy implementation and compliance more practical. It will also eliminate waste, optimize resources, minimize inequity, and increase responsibility. Early in the policy-making process, incorporating this technique can also help to create logically testable laws, having measurable results.

Frameworks for effective monitoring and evaluation must get developed. New frameworks and measurements will need to get developed and implemented because the outcomes and outputs of tech policies differ from traditional policies. For example, simply attaining a technological marvel may not be sufficient to qualify as a proper policy outcome. Instead, metrics to assess the impact of policies should get used.

Additionally, India needs a body of tech policy experts. As the world becomes more specialized, the Indian government will need to develop experts in tech laws. These experts will be excellent at comprehending not only the technical know-how of technologies, but also the socio-economic, cultural, and behavioral consequences of their applications. This group of experts will not only help frame regulations for present technology but also assist in anticipating future technological advancement.

The key to creating scalable, maintainable, and implementable technology laws is assessing how the technology will assimilate laws, needs, and interests of the country in which they are to be implemented. So unless the lawmakers have addressed these factors, robust tech policy cannot be birthed.

Data security should get heavily favored

India doesn’t have any data privacy laws, but one is currently in the pipeline. It will be the country’s first law focusing entirely on data protection and online privacy. Prior notice and consent requirements for the use of personal data, the demand for data localization mandates, the establishment of data protection officers within organizations are the primary focus of the upcoming law.

There is a growing trend of ransomware attacks and phishing scams. The education and health sector remain the most frequently targeted source in the US.

Hackers have honed their skills in spotting and exploiting flaws in target systems. The target organization is unprepared for such attacks. Most companies react too late to a cyberattack because they never anticipate being a target. The company responds too late, and the damage becomes significant. It just goes to show that the threat actors are in the driver’s seat. They have a decent possibility of success because so many systems are vulnerable.

Hackers target businesses on occasion to better their espionage activities. At other times, it will work with criminal elements to accomplish criminal objectives. Companies and governments both become targets. A corporation could become a target, not because its data is valuable in and of itself, but because corporations have poor cybersecurity, making them easy pickings.

Private software manufacturers have built remote surveillance programs for commercial usage because remote surveillance has become a massively profitable economic opportunity. These apps are downloaded and installed on a smartphone device to extract data. Text messages, voice calls, social media activities, and screen recordings are all included in the data.

Remote monitoring apps have legitimate uses such as an anxious dad wanting to keep her daughter safe from online predators or bullies, a boss wanting to increase their employees’ productivity. XNSPY is an example of such an app. Parents or employees can simply pay a minimal monthly fee and start remotely tracking GPS locations, cell phone call logs, text messages, and messages sent via instant messaging apps. All of these give an accurate representation of how kids or employees spend time on their phones. Once a concerned parent or employer has this information, they can take the necessary steps in each case.

But, these apps can also get confused with cell phone hacking software programs because they can physically access an Android phone and hackers may abuse them.

Hackers may use remote monitoring apps or mobile spy apps specifically developed for cell phone hacking. Anyone who owns an active subscription to such apps can theoretically hack cell phones remotely.

Due to such a high level of commercial threat options and ease of access to spying methods, India needs stronger privacy laws to safeguard its 1.4 billion people.